Trending Now
You are at:Home»Featured»March for Marriage Set for Next Week in Washington DC
By Austin Ruse on March 22, 2013 Featured, The Homosexual Agenda 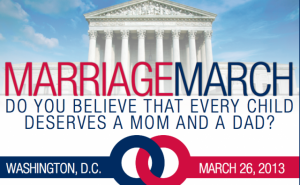 Much of the world looks to the United States for guidance on issues of social policy. The fact of abortion on demand in the U.S. has been a powerful example that other countries have continued to follow.

Marriage is the latest battleground social issue in the U.S. and in many parts of the world. So, all eyes not just in the U.S. but globally are turned to the U.S. Supreme Court on March 26 when oral arguments are heard in Washington DC.

Proponents of traditional marriage are converging on Washington DC next Tuesday for the first ever March for Marriage organized principally by the National Organization for Marriage but who is working with more than a dozen groups from around the country (C-FAM, publisher of the Friday Fax, is a sponsor of the march).

Organizers expect crowds of many thousands will gather to hear more than a dozen speakers including Professor Robert George of Princeton, Penny Nance, president of Concerned Women for America, Bishop Harry Jackson, Archbishop Salvatore Cordileone of San Francisco, the Reverend Bill Owens of the Coalition of African American Pastors and many others.

Organizers are well aware that a national political campaign has been unleashed by homosexual activists and aimed directly at the nine members of the Supreme Court and most especially at Justice Anthony Kennedy who is viewed by many as a swing vote between liberals and conservative justices. March leaders hope their efforts will resonate with the Court though they understand they have been outspent tremendously in the effort.

There has been a steady and ever louder drumbeat by the homosexual camp. It seems every day something new is rolled out that the national media dutifully reports on. One day it was 100 Republican leaders who signed an amicus brief in favor of same sex marriage. Another day it was political conservative and movie star Clint Eastwood announcing he favors a change in the law. Yet another day it was Republican Senator Rob Portman announcing his change in thinking, followed not unexpectedly by Hillary Clinton saying the same thing.

Some experts say this national media campaign aimed at the Supreme Court is unprecedented in American history.

The Court will decide two issues this spring. One is whether the citizens of California were within their rights to define by referendum marriage is between a man and a woman. The other issue is whether the Defense of Marriage Act, which was passed by Congress and signed by President Clinton and which defines man woman marriage for purposes of federal programs, is constitutional or not.

The Court could narrowly decide each case and leave the final decision up to the individual states. The Court, however, could make homosexual marriage a constitutional issue and force it upon all U.S. States including the 41 who have already decided that marriage is for men and women only.

If the Court mandates homosexual marriage, you can be sure that the same will soon be visited upon countries all over the world, so powerful is the U.S. example.