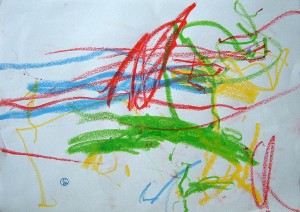 It was a rainy, inside day, so I went to the craft boxes to see what I might find.  Cereal boxes—perfect!  I generally try to save cereal boxes for just such occasions when you find yourself unexpectedly confined indoors—you can do a million different projects with those things—and today, with some markers and scissors, construction paper and glue, we could transform them into houses.  I gathered the kids (aged 4, 3, and 1) at the dining room table and passed out the cereal boxes and markers for stage one:  drawing on our houses.

I gave them washable markers, of course, because in the past we have had issues with markers and non-approved writing surfaces around the house:  my children have been known to look upon a flat, smooth wall, in all its pristine glory, and think to themselves:  “My canvas!”

But it had been a long time since we’d had any of those kind of problems, and I figured the kids were, hopefully, past “the Weather Man” stage of wall scribbling.

The “Weather Man” metaphor probably doesn’t make sense anymore, but back in my day, before the TV weather reporters were “meteorologists” (and if we’d heard that word we would have figured it had something to do with asteroids), our local Weather Man depicted the vagaries of Mother Nature’s changing moods by drawing on a white board with a black marker.  Weather fronts were drawn with long swooping lines (usually rendered with dramatic flare), and then he scribbled arrows to show which way the weather fronts were moving—all accompanied by a running commentary delivered in energetic tones that made the Weather Man’s sweeping marker scrawls irresistibly attractive to the minds of young children.  Too irresistible, as it turned out.

My siblings and I were inspired to copy the Weather Man’s techniques on a grand scale: all over a wall in the big bedroom. Massive fronts of a size and scale capable of swallowing all of North America were emblazoned with crayon right across the smooth plaster of the bedroom wall, punctuated with arrows—and even lightning bolts and tornado swirls.  And once we got into it we added dark clouds, hail, and doodles whose nature remains a mystery to this day.  When we were done, we had created a massive mural of weather depicting an epic atmospheric event of the likes not seen since Noah closed the door on the ark after the last animal had ambled aboard.

Our crayon weather drawing was matched in its epic-ness only by Mom’s reaction upon discovering it.  Only now that I’m a parent can I really relate.

But those days are long gone.  Now the weather reporters are all meteorologists, and no one does the marker thing anymore.  These days it’s all computer graphics that change with the press of a button.  As a consumer of television news, I find the new, high-tech weather reports a less satisfying viewing experience.  As a parent, I find them delightful—a boon to wall sanctity everywhere!

As the kids and I sat around the table with our markers, beginning our rainy day craft, we ran into a problem:  cereal boxes have a glossy finish that washable markers don’t really draw very well on.  So Steph, our sweet, angelic three year old, looked up at me with large, sparkling eyes, and said, “Dad, can I use a permanent marker to write on my box?”

I could see that the washable markers didn’t write very well on the cereal boxes.  Also, the morning was going so well, everyone was calm, happy, and peaceful.  Everyone had been a good listener all morning.  And I wanted the craft to be a success.  And I would be right here watching her the whole time.  And yet . . .

“You only write on paper,” Steph answered in a voice soaking with sincerity.

“That’s right,” I told her.  “So if I give you permanent markers are you going to write on anything besides your cereal box?”

So I left the dining room to fetch the permanent markers from where I keep them—way up high in a kitchen cabinet, where nobody but Dad can reach.

I was gone for maybe 30 seconds.  A minute tops.

“Stephanie!  What are you doing!”

It looked like markers had exploded—all over the hands and arms my sweet, angelic, sincere little three year old—and all over the table top!  My little girl—and my table—were covered in marker scribbles.

I couldn’t even conceive of how it had been possible to fill in that much surface area in so short a time.  It must have been the most intense marker maelstrom ever witnessed in all the annals of Crayola history.

In response to my acclimation of shock and dismay, my daughter just looked up at me and held out the offending marker for confiscation.

I sent her to the naughty chair for a little time-out—and returned the permanent markers back to the safety of their storage aerie, there to remain until my children turn 16.  Or 26.  Even then, we’ll see.

Later, when we were eating lunch, Stephanie held up her arms to examine the faded remnants of marker scribbles still visible on her hands and forearms, and while considering her illicit handiwork she said with a studious air:  “You know Dad, sometimes little kids just aren’t good.”

She has a wise, if mischievous, soul.

But the craft must go on, and you can’t stay in the naughty chair forever.  After I’d washed the table clean (and her arms and hands as well as I could), Steph was brought back from exile to resume crafting, and she did fine.  Markers were once again entrusted into her hands, along with scissors and glue, and nothing was used for destructive purposes.  So, while it’s true that sometimes little kids just aren’t good, it’s also true that sometimes they are—and sometimes all they need is a second chance.

Which is a good lesson for Lent, because it’s not just little kids that “just aren’t good” sometimes.  As Saint Francis de Sales said:  “Raise up your heart after a fall, sweetly and gently, humbling yourself before God in the knowledge of your misery, and do not be astonished at your weakness, since it is not surprising that weakness should be weak, infirmity infirm, and frailty frail.”

To fall is human.  But so is getting back up again.  As C. S. Lewis reminded us in Prince Caspian:

“You come of the Lord Adam and the Lady Eve,” said Aslan.  “And that is both honour enough to erect the head of the poorest beggar, and shame enough to bow the shoulders of the greatest emperor in earth.  Be content.”

Fortunately for us, as sung by dancing vegetables in the Veggie Tales movie Jonah:  “Our God is a God of second chances.”  We just need to be willing to take those second chances when they’re offered.

When we do, we can transform our lives, and even light up heaven with joy.  As Jesus said:  “I tell you . . . there will be more joy in heaven over one sinner who repents than over ninety-nine righteous people who have no need of repentance.”  Lk 15, 7.  And Jesus told us:  “I tell you, there will be rejoicing among the angels of God over one sinner who repents.”  Lk 15, 10.

St. Basil the Great said:  “There is still time for endurance, time for patience, time for healing, time for change.  Have you slipped?  Rise up.  Have you sinned?  Cease.  Do not stand among sinners, but leap aside.  For when you turn away and weep, then you will be saved.”  Lent is that time—an opportunity to seize our second chances, and spread some joy around heaven!