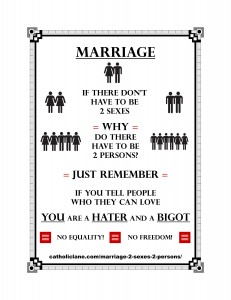 The next step in the “Progressive” deconstruction of a fundamental institution of our society is likely to be multi-partner “marriage”.

“Polyamory”: if you listen to talk radio in the USA, or get at least some of your information from the Internet, you’ve probably seen or heard the word. Those who get their news only from the Democrats in mainstream media have probably not.

According to the More Than Two website, the Oxford English Dictionary defines “polyamory” thus: The fact of having simultaneous close emotional relationships with two or more other individuals, viewed as an alternative to monogamy, esp. in regard to matters of sexual fidelity; the custom or practice of engaging in multiple sexual relationships with the knowledge and consent of all partners concerned.

Multi-partner “marriage” is going to be the next step in the “progression” of “civil rights” regarding marriage. Oh, there are many in the public square who would like you to believe that’s not the case — that I’m setting up here a straw man or a slippery slope or a red herring or something or other — but they are either deceived or deceiving.

Some others, though, are more honest. Take, for instance, this anonymous blog at the Economist, Apr. 8th:

One of the assumptions that gay marriage calls into question, for many conservatives, is: why pairs, then? If not man-woman, then why not man-woman-woman, and so forth? Again, the response of gay-marriage proponents is generally ridicule. I don’t think this is a ridiculous question. “Why can’t you marry your dog, then?” is a ridiculous question; marriage, in our society, is between consenting adult persons…. But “why only two?” isn’t a ridiculous question. It’s easy enough to show that gay marriage does not empirically lead to pressure to legalise polygamy; that hasn’t happened anywhere that gay marriage is legal. But this is different from explaining why opening up the boundaries of the 20th-century understanding of marriage shouldn’t raise the possibility of legalising polygamy. Why shouldn’t it be legal for more than two consenting adults to marry each other?

The article’s conclusion is unsurprisingly weak:

Today, gay men and women want to have their sexual bonding embraced within the same norms, to achieve equality, and that’s their right. But my guess is that the real answer to the conservative question “why not more than two people, then?” is that we will stick to pairs because marriage is a creature of the state and pairs are the form that makes the state strongest. Nobody, though, gays or conservatives, finds this way of thinking about the issue very appealing, so it probably won’t get much play.

At least one of them is being quietly told to shut up, lest the rest of us catch on:

But within the ranks of the UUA [Unitarian Universalit Association] over the past few years, there has been some quiet unrest concerning a small but activist group that vociferously supports polyamory. That is to say “the practice of loving and relating intimately to more than one other person at a time,” according to a mission statement by Unitarian Universalists for Polyamory Awareness (UUPA). The UUPA “encourages spiritual wholeness regarding polyamory,” including the right of polyamorous people to have their unions blessed by a minister.

But as the issue of same-sex marriage heads to the Supreme Court, many committed Unitarians think the denomination should have a position, which is that polyamory activists should just sit down and be quiet. For one thing, poly activists are seen as undermining the fight for same-sex marriage.

And one can already find articles explaining and defending polyamory at websites that are ostensibly about science; we need only see their headlines to get the drift:

And the popular Slate website published an article, Apr. 15th, whose opening paragraphs sums it up:

Recently, Tony Perkins of the Family Research Council reintroduced a tired refrain: Legalized gay marriage could lead to other legal forms of marriage disaster, such as polygamy. Rick Santorum, Bill O’Reilly, and other social conservatives have made similar claims. It’s hardly a new prediction—we’ve been hearing it for years. Gay marriage is a slippery slope! A gateway drug! If we legalize it, then what’s next? Legalized polygamy?

We can only hope.

(Polygamy is, of course, a kind of polyamory.)

And support groups for polyamory already have websites:

For the whole point of “marriage equality” is neither marriage nor equality, and at least one activist has taken cautious, timorous steps to acknowledge that:

The successful, pragmatic strategy of gay activists has been to assert that same-sex marriage will not change the institution itself. Their argument is that there is no need to defend marriage against loving same-sex couples, because these couples don’t want to alter it; they just want to participate in it. But as we race to a victorious finish, it is time to begin forcefully articulating that, in fact, maybe we do want to change marriage — because while marriage should be a choice, it should not be an imperative. For decades, LGBTQ communities have generated new forms of family built on foundations of shared commitments, collective responsibilities, nonconjugal love and parental devotion not predicated on shared genetics. Shut out of social-normative options for making families, they queered the very idea of family. It would be tragic to allow marriage equality to destroy or marginalize the pioneering work of queer families who have taught us that family is more complicated and more fulfilling than traditional models of marriage can ever capture.

It is astonishing to be alive in this moment when marriage equality is written in the stars, but I hope we will be like the child who asks what difference it really makes. Because I suspect the goal of achieving this right is less about the ceremonies, the flowers, the love or even the economic benefits. I suspect the real goal is to achieve a more inclusive recognition of the authentic and enduring ways that we connect ourselves to one another, without needing the words “husband,” “wife” or even “spouse.” The difference we want this movement to make is bigger than that.

The author of that Nation piece is none other than Melissa “All Your Children Are Belong To Us” Harris-Perry.

Note well, they finally take a timid approach towards honesty only when they think they’ve won.