Trending Now
You are at:Home»Featured»Marthas and Marys
By Stephanie Gulya on March 19, 2013 Featured, Learn & Live the Faith, Live in Christ, Women 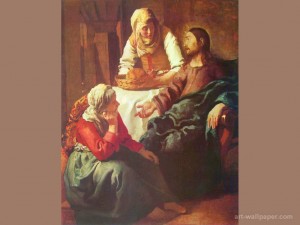 “As they continued their journey he entered a village where a woman whose name was Martha welcomed him. She had a sister named Mary who sat beside the Lord at his feet listening to him speak. Martha, burdened with much serving, came to him and said, “Lord, do you not care that my sister has left me by myself to do the serving? Tell her to help me.” The Lord said to her in reply, “Martha, Martha, you are anxious and worried about many things. There is need of only one thing. Mary has chosen the better part and it will not be taken from her.”  -Luke 10: 38-42

Recently I have been having some “relational difficulties” with one of my co-workers. Even though we have the same end-goal in mind for life (I am referring to Heaven), we seem to have very, very, very different ideas about reaching that goal and very, very, very different personalities. I have to work closely with this person on a daily basis and she is also training me to some degree because I am taking over one of the jobs she used to do. In addition, I am new to the community so that adds in the difficulties of getting to know each other from scratch.

The other day as I was talking to my mother about my struggles, she told me that this sounds like a case of Martha and Mary. Since she gave me that little insight, I have prayed and thought about what that means and how that knowledge might effect my actions. What I want to share with you are a few of my reflections on how to deal with situations where differences in personality and approaches can often seem to take away from the goals you are trying to achieve.

I am sure there is a lot more we can all learn from this line of thinking, but this is at least enough for me to work on for now. One last thought: Christ did say that Mary had chosen the better part, so that leaves me wondering if the Marys aren’t a little more right in the end.

May God be praised!