Trending Now
You are at:Home»Columnists»Masquerades in the News
By Jann FritzHuspen on December 16, 2011 Columnists, Contraception & Abortion, Featured, Life Issues & Bioethics, On Media, The Homosexual Agenda, The Social Order, Women 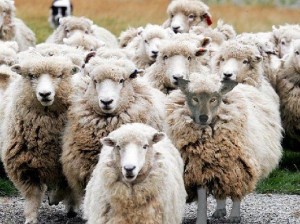 The Culture of Death reminds me of the dragon from the Book of Revelations; it is an “enormous red dragon with seven heads and ten horns” (NIV Rev 12:3). Two items in this week’s news reveal just how the Culture of Death masquerades as something supposedly good as it rears two of its ugly heads—the head of abortion and the head of homosexual behavior.

In the first news story, many pro-lifers and pro-life news sites rejoiced at U.S. Department of Health and Human Services Secretary Kathleen Sebelius’ about face on Plan B (also called the morning-after pill or emergency contraception). Last week the FDA had given Plan B the green light for use without a prescription for girls as young as 11 years old (and possibly without parental knowledge), but Sebelius blocked this decision. By over-ruling the FDA’s recommendation, she maintained the current law; girls aged 17 and under will still need a prescription for this drug.

“Wow! A victory for our pro-life cause!” many of us thought.

Yes, on one hand it is a victory, for if even one pre-born baby’s life is spared because of this decision, we can and should rejoice in this as a victory. But what is the lie that is lurking just beneath the surface of this news story? Why would Sebelius, a long time, self-proclaimed, die hard Planned Parenthood supporter suddenly want to make it harder to get a “do-it-yourself” abortion?

I think Live Action blogger Kate Bryan is on to something. She writes that Sebelius’ actions are really a ploy to help Planned Parenthood regain some its lost funding. You see, this year alone Panned Parenthood has lost $61 million in taxpayer funding, and by keeping Plan B on the prescription drug list, Planned Parenthood’s dominance in distributing the Plan B morning-after pill will be maintained. Sebelius’ surprising decision actually “helps bring [Planned Parenthood] enhanced access to young people for long-term, federally-compensated business…Planned Parenthood won’t have to compete with drug stores who would have sold Plan B over-the-counter.”1

Don’t be fooled and don’t buy into the lie; Sibelius is simply doing what she does best—being the wolf in sheep’s clothing! So what at first glance looks like parental good sense, we now realize is just the bitter taste of death lurking under a sweet candy coating.

The second newsworthy item concerns our need to continue our vigilance in how and where we spend our hard-earned money. Macy’s is now on the “do-not-shop-there” list for many of us after their latest stunt.

A female employee of Macy’s in San Antonio, TX, was fired this week for telling a male transgender (transvestite) customer that he could not change in the women’s dressing room. The employee, Natalie Johnson, saw a teenaged boy shopping for women’s clothes. But when she saw him exit the ladies’ fitting rooms, she told him he could not go back in to try on clothes, since, even though he was wearing make-up and female clothing, he was clearly a male.

The male shopper reportedly told her “Macy’s is LGBT-friendly and allows transgender people to change in the dressing room of the gender they identify with.”

A scene ensued when the man’s friends began to harass Johnson, complete with expletives. But Johnson held her ground saying that Macy’s is also non-discriminatory toward religion, and that allowing him back into the female dressing rooms would go against her religious beliefs if she were to lie and agree that he was a woman, or compromise her beliefs about homosexuality.

A manager was called who promptly demanded that Johnson allow the young man into the women’s fitting rooms or lose her job. Johnston held her ground and was promptly fired (kudos to you, Natalie Johnson—we admired your faithfulness).

Farris told KENS-TV, “[T]hese kinds of incidents are not uncommon. We have to begin to ask ourselves, are we really doing this because we are afraid or are we just practicing hate because that’s what we were taught?”

Did you notice that although Johnston was doing what she believed was the right and honest thing to do (and by all accounts, remained polite and calm) suddenly she was practicing hate? Did you also notice that nothing negative was said about the group of young men hassling a retail employee even when they used expletives against her?

In today’s Culture of Death, men masquerade as women and women as men. And what on the surface seemed like a victory for parents and young women, is really a way to channel money into the many-headed dragon’s coffers. The Culture of Death always turns truth into a lie and manipulates lies into its own form of truth. Those caught up in the Culture of Death will continue trying to get us be complicit in their lies by twisting and distorting the truth. But it is all just Orwellian Newspeak. A lie is always a lie, no matter how it sweetly it is served to us, no matter how often the news media tries to force feed it to us.

Don’t be fooled.  Look beyond the masquerades. Sin, no matter how it is disguised, always leads to death.