Trending Now
You are at:Home»Learn & Live the Faith»Apologetics»May 21, 2011: The All Too Familiar “Cleverly Invented Story”
By Jeffery Schwehm on May 20, 2011 Apologetics, Featured 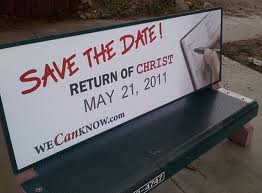 You may have seen them in your community too.  What I am talking about are these very large billboards announcing the end of the world on May 21, 2011.  These billboards are promoting the teachings of Mr. Harold Camping, a radio preacher who believes that Jesus will “rapture” Christ’s true believers into heaven and resurrect the righteous dead on May 21st, while the unbelievers left behind will experience torments on earth leading up to the full destruction of the earth and universe in October of 2011.

This “predicting of the end of the world” and interpreting Scriptures in a very clever way to support some prediction of the date of the return of Jesus is all too familiar to me.  I was raised in another apocalyptic cult known today as the Jehovah’s Witnesses.  This group promotes a similar “cleverly invented story” which continues to deceive millions of people and has destroyed the faith of countless others.

Russell and Camping: The Great Decoders of the Bible

One characteristic that is common among individuals who like to make predictions regarding the end of the world or the return of Christ is that these individuals believe that there is some secret knowledge contained in Holy Scripture that only they can decode for the world.

Charles T. Russell, who was the founder of the Bible Student movement of the late 1800’s that later morphed into the Jehovah’s Witnesses of the 20th and 21st centuries, and Mr. Harold Camping are quite similar in their “decoding the Bible” style.  Like Russell who used bizarre interpretations and calculations to proclaim to the world that Jesus would return in the year 1914 A.D. so Mr. Camping is engaging in the exact same bizarre behavior.  Perhaps the only major difference is that at least Mr. Camping has not yet decided to teach that the measurements of the Great Pyramid in Egypt can be used as a guide to support his interpretation of the Bible.  This is something that Russell claimed about his bizarre teachings back in his day.

In any case, what Mr. Camping is doing today is something that has been done for centuries.  He is just another individual, in a very long line of individuals, claiming to be specially chosen by God to interpret the Bible in a special way and has now arrived at another in a very LONG line of new dates that will supposedly result in the end of the world.

While most people view Mr. Camping and Russell for the cranks that they are, there are many others who are and will be truly deceived by these types of cult leaders.  These deceived individuals will give up their legitimate dreams and hopes to follow the teachings of these individuals.   What will happen to them when Camping’s predictions are proven false?

After the False Prophecy that Never Happened

Many may not know this but Mr. Camping once taught that the world would end in 1994.  When asked about this, Mr. Camping’s response was that he had not really totally completed his work in decoding the Bible and at that time he thought that it was only a possibility that the world would end in 1994.  However, today he is absolutely sure since he has now studied the entire Bible that May 21, 2011 is THE day.

Similarly, when Charles T. Russell’s prophecy about October 1914 failed, the followers of Russell came up with a way to excuse their failure.   Russell’s group basically taught and still teaches to this day that Russell got the month and year correct but was just wrong about what was going to happen.  Russell thought that Jesus’ return in 1914 would be a visible return.  However, Russell’s followers and even the Jehovah’s Witnesses of today teach that Jesus returned invisibly in 1914 and chose their religious organization as His true channel of communication and the re-establishment of true Christianity on earth.  This means that JWs believe that in order to be a true Christian one must be an active JW. And to be an active JW, one must be, not only attending theirmeetings regularly, but regularly going door-to-door to spread their message.

It remains to be seen how Mr. Camping will deal with his upcoming prophetic failure this weekend.  It should be interesting to see how he explains it away.  He may not come up with exactly the same excuse as the followers of Russell did but what is troubling is that like Russell, Mr. Camping is very hostile to mainstream Protestant and Catholic Christianity and claims that Christ has left the Church and given His Spirit to Him and to His followers.

Do Not Believe in Cleverly Invented Stories

Whenever I hear of another individual attempting to awe the believing world with their claims that they have discovered the day, month, or year for the end of the world, it reminds me of the counsel that St. Peter gives us in 2 Peter 1: 16-21:

“We did not follow cleverly devised myths when we made known to you the power and coming of our Lord Jesus Christ, but we had been eyewitnesses of his majesty. For he received honor and glory from God the Father when that unique declaration came to him from the majestic glory, “This is my Son, my beloved, with whom I am well pleased.”  We ourselves heard this voice come from heaven while we were with him on the holy mountain.  Moreover, we possess the prophetic message that is altogether reliable. You will do well to be attentive to it, as to a lamp shining in a dark place, until day dawns and the morning star rises in your hearts. Know this first of all, that there is no prophecy of scripture that is a matter of personal interpretation, for no prophecy ever came through human will; but rather human beings moved by the Holy Spirit spoke under the influence of God.

Like today, there were also individuals in St. Peter’s day making one claim after another about how they were given special information about Jesus that the apostles, those who knew Jesus personally, had not received.  St. Peter reminds Christians that he saw Jesus in His glory on that Holy Mountain of the Transfiguration and heard the Father’s approval of His Son with his own ears.

As Catholics today, we have the gift of apostolic succession where the successors of the apostles, our Bishops, with the leadership of the successor of St. Peter, our Pope, serve as the authentic interpreters of Sacred Tradition and Scripture.  Our Bishops have 2000 years of the wisdom of the Saints and other Doctors of the Church from which to draw on when teaching us how to apply the Teachings of Jesus Christ to our lives today.  This is in sharp contrast to the mere 20 years or so of experience that Mr. Camping has or the mere 100 years or so that the Jehovah’s Witnesses have.

I can testify to the spiritual damage that was done to me and others by clever story tellers like Camping and Russell.  In my own life, my parents who became followers of the JWs taught me and my siblings that we would never grow up or marry or have families before Jesus’ return.  This meant that we would not need an education or need to develop the necessary skills to live in this world.  My own upbringing was focused primarily on telling others about the false teachings of the Jehovah’s Witnesses.  When I realized that the teachings of the Jehovah’s Witnesses were false, I also realized how ill-prepared I was to live in the world.

In addition, because of the Jehovah’s Witnesses hostility to the Catholic Church and other mainstream Protestant denominations and the fact that I had been burned so badly by the JWs themselves, it took years for me to rediscover my faith in God.  To this day, I met former JWs who are so hostile to any type of believe in God that the vast majority of them settle for a life of agnosticism or atheism.  Other former JWs, who could not live up to the rules of the JWs, are so distrustful of any religious authority besides the JWs that they settle for a life of depressing despair thinking that they are “not good enough for God” and believing that God will destroy them at any moment.

Most individuals who get involved in groups like the JWs and like Camping’s group are truly looking for an encounter with the living God.  And, as a Catholic convert from the JWs, I can tell you that the Catholic Church has that special encounter.

We have the actual Church that Jesus founded.  We have the Sacred Tradition and the Sacred Scriptures that were given to us by Jesus through His chosen Apostles.  And we have those means of receiving the grace of Jesus known as the Sacraments, including the Sacrament of Sacraments — the Holy Eucharist — where we receive the Body, Blood, Soul and Divinity of Christ.

I am of the opinion that many of those who are so quick to believe in these apocalyptic predictions are truly searching for a closer connection to Christ.  Unfortunately, they have chosen a false Gospel and a false Christ.  We, as Catholics, have what they are really looking for and hopefully when given the opportunity we will help these deceived individuals in such a way so that they leave behind these “cleverly invented stories” and come home to the “Greatest True Story Every Told”.