Trending Now
You are at:Home»Learn & Live the Faith»Apologetics»Maybe a Time to Say Yes…and Mean It
By Robert J. Gieb on October 23, 2015 Apologetics, Featured, Live in Christ 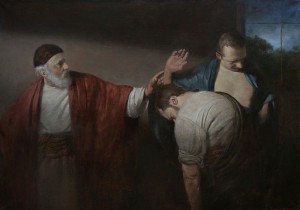 What do you think? There was a man who had two sons. He went to the first and said, “Son, go and work today in the vineyard.”

“I will not,” he answered, but later he changed his mind and went. Then the father went to the other son and said the same thing.

“Which of the two did what his father wanted?”

“The first,” they answered.

The now deceased bishop of a diocese in which I once lived probably never uttered in public or officially wrote a heretical statement in his decade’s long episcopacy. But his actions and omissions, and those of his appointees, revealed a profound rejection of many aspects of Catholic teaching. The ministerial priesthood was on his rejected list, as was the infallible teaching in Ordinatio Sacerdotalis that the priesthood can be conferred only on a baptized male. He always had a left-of-center religious sister as his vocations gate keeper, who before Ordinatio Sacerdotalis was ever at the ready for Vatican recognition of a female priesthood. After the issuance of the encyclical the focus moved to a general denigration of the importance of the priesthood.

Until stopped by the Holy See he planned to have regular “priestless Sundays” i.e. no Mass Sundays, with a rolling schedule where some parishes would have Mass celebrated while other parishes would only have a Communion service. Beyond that idea, but arising from the same decayed faith underlying it, the teaching of Humanae Vitae was effectively silenced in pulpits. The teaching of the indissolubility of marriage did no better, while the marriage tribunal ran at top speed churning out decrees of nullity. The joke was: 200 petitions filed; 500 granted.

So forgive me if I am not comforted by the now constant reports that very powerful people in the Church are promising that the official doctrine of the Catholic Church on marriage and the Eucharist will not be changed, to wit: That marriage is between a man and a woman, supported by humble, generous love of the spouses, and open to new life; that it is indissoluble; and that one cannot receive Holy Communion if he or she is divorced and re-married (without a decree of nullity of the first marriage) or a party to a same sex (and so) false marriage. My former bishop never contradicted any of those teachings in homily or in print. Not once! But I do not think for a minute that he believed all of them, and maybe not even most of them.

I am not sure what many in the hierarchy believe today. But I do know that the consequences of my late bishop’s dissent in practice infected and influenced the way he administered the diocese as much as if he had nailed a heretical tract to the door of the cathedral. His personal rebellion lost souls to Protestant Churches and to the Lefebvrists, and many more to an undemanding universalism. It reduced vocations to the priesthood and religious life, weakened Catholic marriages, greatly enfeebled the sense of the sacred in the Liturgy, and diluted belief in the Real Presence. His dissent allowed a spiritual malaise to settle into the life of the local Church. And this was all done in the name of love and sensitivity to the needs of others… and in “the spirit of Vatican II.”

The cri de coeur of the accomodationists is mercy. Mercy is good. It is a Catholic duty demanded by Jesus. But it must be true mercy, based on truth. Their charge is that most faithful Catholics don’t treat the divorced and the re-married or persons with same sex attractions charitably. But this borders on the mendacious. Incidents surely do happen, but it is neither systemic nor rampant in the Church.

I have never seen uncharitable acts at Mass as to either group at any parish which I have attended. I have participated with people from both groups in parish projects, and every Sunday I go to Mass with a sizable number of both. They kneel in the same pews with observant Catholic men and women in regular marriages and their children, and with single Catholics who do not have same sex attractions. Like all Catholics if they have serious sin which they have not confessed they may not receive the Eucharist. That is reverence for the divine and an admission of sinfulness; not a lack of charity or the absence of mercy.

But I will tell you that there is a palpable fear that the Magisterium will be improperly bifurcated between licit teaching, and illicit practice. There is a fear that our leaders may fall to the temptation to accept the same idea of cheap mercy and cheap grace that condemned the teachings of Humanae Vitae to thunderous silence before even the ink on Paul VI’s signature was dry, a silence which contributed greatly to the decline in the Christian view of marriage, as well as to the spread of legal abortion.

There is a legitimate fear that our leaders will say the official and true words of Jesus, but in practice accommodate those who refuse to accept those words and who want it both ways. The fear is that they will accommodate those who say that they will go into the vineyard, but then refuse. The fear is that they have forgotten why we now call John Paul II a saint! Was his twenty-seven year papacy, and his great catechesis on objective moral truth and the true Catholic teaching on conscience all for naught?

Conscience is the new-old term of choice among the accomodationists. It is their magic solution to avoid the cross and suffering. It has been the grand way around Humanae Vitae, the protection of life in the womb and on the death bed, and so many other demanding teachings of Jesus Christ. Following one’s conscience was a hot topic in many pulpits and Catholic publications in the late 1960s and the 1970s. It was the way to avoid the hard teachings, and still claim to be a faithful Catholic…and receive the sacraments.

But if one must follow his or her conscience, it must be a conscience that has been deeply informed by the Catholic Catechism. A properly formed conscience will lead one to embrace the truth; not to rebel against it. A flawed individual conscience, pace the accomodationists, is not justification for gutting the preaching and the practice of Catholic beliefs.

Some of my fellow sinners come from all manner of sordid backgrounds, and I kneel in church at Mass with some of them every day. Most of my fellow sinners likely feel some connection with great sinners who have repented and converted even if perhaps they don’t share the same extreme personal history. In short, they may not be the converted prostitutes, violent thugs, government extortionists, or public cheats of the Gospel parables, but they are not unfamiliar with serious sin.

However, they are the ones who fell on their knees and continue to fall on their knees before the Lord Jesus acknowledging the truth of his words, confessing their sins committed against his truth, pledging in good faith their intent to go and sin no more, and accepting that their lives-and not his truth-must change, and that they must join in his in suffering if they are to find him in the breaking of the bread.

They believe and repent, and they change because faith without works is dead, including, especially including, the good works of metanoia. The accomodationists and the purveyors of the notion of cheap mercy do not understand this. They are shown repentance and conversion, and while they see it they want to avoid the cross and the change that must come with repentance and conversion.

One son said yes, and did not go. One son said no, but did go. Who will be saved? What do you think?