Trending Now
You are at:Home»Columnists»Media Waste No Time to Display Ignorance
By Marybeth Hicks on February 13, 2013 Columnists, Featured, On Media 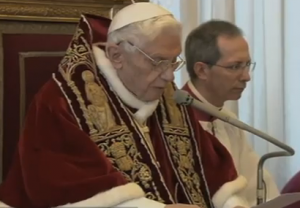 Monday’s announcement by Pope Benedict XVI that he will resign the papacy at the end of this month because of his increasingly frail health has revealed what we practicing Catholics in America have long understood: Our faith remains a mystery.

No time has been wasted stirring up a frenzy of speculation about what will happen next in the Catholic Church, not from the perspective of its place in the hearts and lives of 1.1 billion Catholics around the globe, but through the prism of the mainstream media’s political priorities.

Thus, The Guardian outlined the most pressing issues supposedly facing the next pontiff: contraception and AIDS, sexual abuse within the church, homosexuality and same-sex marriage, abortion, and the roles of women.

If only a political pollster could be elected by the College of Cardinals to sit in the chair of St. Peter. Then, rather than understanding its mission as spreading the good news of the Gospel of Jesus Christ, the leader of Catholics worldwide could simply conduct exit surveys after Sunday Mass to figure out what the priorities of the faith ought to be.

Another oddity exposed within only two days of media coverage: Journalists seem to think Catholic doctrine is fluid according to the man in the white beanie (the little skullcap that is called a zucchetto). For example, an article in The New York Times originally titled “Pope’s Successor Is Likely to Share His Doctrine” — later renamed “Successor to Benedict Will Lead a Church at a Crossroads,” probably because the first stab the headline was so what’s the word? ignorant — seems to indicate that a pope gets to decide what is and isn’t doctrinal:

“The resignation sets up a struggle between the staunchest conservatives, in Benedict’s mold, who advocate a smaller church of more fervent believers, and those who believe that the church can broaden its appeal in small but significant ways, like allowing divorced Catholics who remarry without an annulment to receive communion or loosening restrictions on condom use in an effort to prevent AIDS. There are no plausible candidates who would move on issues like ending celibacy for priests or the ordination of women.”

As is typical, the media are always hung up on Catholic “rules” without taking the time to explain why they exist or why they are consistent with the church’s understanding of God’s purposes, or why they reflect God’s love for us, not his desire to slap our hands with a ruler like a stereotypical Hollywood nun.

Accustomed as they are to electionspeak, the mainstream media can’t seem to fathom that the selection of a pope is an altogether different sort of thing. This is clearly at play in the media’s coverage of bookmakers’ handicapping of potential papal candidates. (Cardinals from Ghana, Nigeria and Canada are your best bets so far.) No doubt there will be polls to indicate the preferences of American Catholics, broken down by demographic attributes, of course.

In fact, it is one of those “front-runners,” Nigerian Cardinal Francis Arinze, prefect emeritus of the Congregation for Divine Worship, whose response to the pope’s historic announcement reminds us that the papacy is unlike any other leadership position, precisely because of the manner in which he is chosen: by divine inspiration.

“The church will find another one. And God is always there. The Holy Spirit does not go on holidays. Our faith is not on the pope, it is on Christ, who is the foundation of the church. Christ is the same yesterday, today, and the same forever. We all are servants. We come and go. Christ doesn’t come and go. He stays on. Without Christ, the church has no more meaning.”

You can almost imagine the headlines after the conclave at which the pontiff is elected: “New pope likely to spread faith in Jesus Christ.”

You would think that would be too obvious, but maybe not.