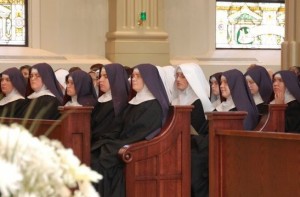 On December 8, the Solemn Feast of the Immaculate Conception, the British medical journal, The Lancet, published a most puzzling commentary, in which a clarion call is issued for the Catholic Church to provide all nuns with oral contraceptives in order to prevent cancer. Australian researchers Kara Britt and Roger Short make their recommendation based on the increased risk of ovarian, endometrial and breast cancer associated with nulliparity, the condition of having never been pregnant:

Today, the world’s 94,790 nuns still pay a terrible price for their chastity because they have a greatly increased risk of breast, ovarian, and uterine cancers: the hazards of their nulliparity.

While nuns almost always carry this risk factor, many lay women are also nulliparous. Why are the authors limiting their recommendation to women religious? It seems that these researchers are trying to cast the Church hierarchy in a negative light by claiming they are not addressing a significant health issue of their women religious:

If the Catholic Church could make the oral contraceptive pill freely available to all its nuns, it would reduce the risk of those accursed pests, cancer of the ovary and uterus, and give nuns’ plight the recognition it deserves.

Oral contraceptives are also fraught with risks like blood clots and strokes. No major medical organization including the American College of Obstetrics and Gynecology, the National Cancer Institute or the American Cancer Society has issued any recommendations for the routine use of oral contraceptives as cancer prevention. Yet Britt and Short suggest the Catholic Church do so for nuns.

First, do they have such a poor understanding of religious life that they believe the health care of nuns is decided by edicts from the Vatican?  Women religious receive medical care just as other women do. Their private physicians evaluate each sister’s individual medical history and current state of health and make appropriate recommendations. If a physician felt that oral contraceptives were indicated for either treatment of a current disease or prevention of a future disease, no one would raise moral objections. The Catholic Church rejects the use of contraceptives when they are used to distort and disrupt the procreative nature of the marital act. The Church has no objections to the appropriate use of hormonal therapies for medical conditions.

So Britt and Short’s assertion that the Church must act to remedy the plight of nuns might make for a shocking headline, but it is really meaningless. Nuns already have access to oral contraceptives if a doctor recommends them, and if used for purposes other than avoiding pregnancy – as they would surely be in the case of the celibate.  There is no moral quandary. Current standards of medical care, however, do not include “the pill” as therapy for the increased cancer risks of nulliparity, due in large part to the other risks that come with their use.

It is surprising that a prestigious medical journal like The Lancet would offer a forum to those seeking to embarrass the Church, especially when they call for medical care that is inconsistent with standard practice.