Trending Now
You are at:Home»Featured»Men Are Needed to Protect Unborn Babies
By Judie Brown on September 29, 2011 Featured, Life Issues & Bioethics 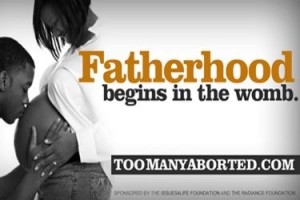 The United States of America is about to witness a series of phenomena that are stark reminders of the ever-growing gap between the family unit as we knew it in the fifties and the broken home that we recognize as emblematic of the current milieu. While we are hopeful that the most effective destroyer of the family, Planned Parenthood, is quaking in its ever-shrinking boots, we are equally optimistic that more Americans will get involved in 2011’s upcoming events than in any previous year.

[Tuesda y was] the first day of the fall 2011 40 Days for Life campaign. This community-based project involves prayer and action in a way that brings attention to the tragedy of abortion, the destruction of motherhood, and the absence of fathers. As the website says, “40 Days for Life takes a determined, peaceful approach to showing local communities the consequences of abortion in their own neighborhoods, for their own friends and families. It puts into action a desire to cooperate with God in the carrying out of His plan for the end of abortion in America.”

Thousands of Americans will provide silent witness to their belief that, in God and through His power, a great healing is needed to cure our land of the cruel denial of human rights known as abortion.

On Sunday, October 2, the ever-popular Life Chain will be seen on the highways and byways of towns, cities, and communities around America. Families will stand in silent witness with signs that state “Abortion Kills Children” to honor the memory of the dead and to bring attention to the residual pain of the living.

Monday, October 3, is Pro-Life Memorial Day, and young people who are survivors of the infamous Supreme Court decisions of 1973, along with their peers and family members, will remind the Justices of the Supreme Court, on their first day back to work, that they are the ones who, if so moved, could undo the tragedy of their predecessors. The shirts that participants will wear state the simple truth—that 53,543,392 of our fellow Americans have been surgically killed since January 22, 1973. This number illustrates a horror that has destroyed families, emasculated fathers, and turned mothers against their babies.

As these events converge to awaken the apathetic conscience of the nation, it is no accident that the new Radiance Foundation billboard campaign, “Fatherhood Begins in the Womb” has also launched in the nation’s cities and towns. Depicting a young black father and his reaction to his baby in utero, the artwork on the billboard is moving.

The point of the campaign, however, which is that fathers have an immediate responsibility for their offspring in every case, is a message that needs to be repeated over and over again today. The culture waxes cold to the obvious which is quite simply that procreation requires both a father and a mother. Walking away from one’s responsibility after the child has come into existence is heartless, cruel and, in today’s quick-fix mentality, too often ends in the death of a child.

Ryan Bomberger of the Radiance Foundation says it well: “Men have been empowered by Roe v. Wade to have sex and run. They’ve been forced out of their crucial role by perpetual welfare and today’s brand of liberal feminism.”

Turning this sad situation around is not going to be an easy task, but pro-life Americans have always known that and have persisted in their quest for equal rights for one and all. Will we succeed? Yes. We will succeed because this is God’s struggle; these are His children and the Father will not be mocked.

Get involved now and help serve the Lord by making your voice heard: