Trending Now
You are at:Home»Featured»Mercy Is Life
By Robert J. Gieb on May 27, 2011 Featured, Life Issues & Bioethics 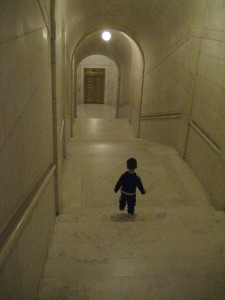 The feast of Divine Mercy is celebrated by the Catholic Church on the first Sunday after Easter Sunday. At least one of the purposes of celebrating this feast in the heart of the Easter season is to remind us that the salvific death of the now risen Lord, replete with the promise of Resurrection and eternal happiness for those who believe in and follow Him, is the ultimate act of mercy. As it is written in the Letter to the Hebrews: “Therefore, [Jesus] had to become like his brothers in every way, that he might be a merciful and faithful high priest before God to expiate the sins of the people.” Heb. 2:17” Indeed St. Paul taught till his death that it was out of undeserved mercy that Jesus “though he was in the form of God, did not regard equality with God something to be grasped. Rather, he emptied himself, taking the form of a slave, coming in human likeness; and found human in appearance, he humbled himself, becoming obedient to death, even death on a cross” (Phil 2:3-6).

St. Thomas Aquinas, in his Summa Theologica, articulated the great truth that is, so to speak, the other side of the words in the Letter to the Hebrews and in Paul’s Letter to the Philippians about the Incarnation: God’s mercy truly brings salvation to fallen human beings, but it is God’s mercy that brings human beings from non-being into being in the first place. “We may say, for instance, that … being man is on account of the divine goodness. So in every work of God, viewed at its primary source, there appears mercy. In all that follows, the power of mercy remains, and works indeed with even greater force” (Summa Theol., Ques. 21, Art. 4). That is, the something of each of us was created from nothing for no reason other than merciful love.

St. Paul said as much to the Christians in Rome: “[Abraham] is our father in the sight of God, in whom he believed, who gives life to the dead and calls into being what does not exist” (Rom. 4:17). St. Augustine later made the same point: “[Creation] cries out that it has been created” and that that “it did not create itself: [I] exist because I am created; and I was not before I came to be…” (St. Augustine, Confessiones, XI, 4, PL xxxii, c. 812).

In short, we exist only because God chose to bring us into being. We did not have to exist. There was no necessity that we be created. But God is love, and our creation as human beings is nothing less than the incarnation of His mercy within time and history. This is why the abuse and destruction of God’s incarnated mercy, most especially the innocent unborn, is inherently evil.

Saint Faustina, the saint of divine mercy, wrote in her diary about a terrible experience that she endured, which was related to the flesh and blood consequence of those who obscenely promote killing of the unborn, and regularly justify it as a merciful act. “At eight o’clock I was seized with such violent pains that I had to go to bed at once. I was convulsed with pain for three hours….. No medicine had any effect on me, and whatever I swallowed I threw up. At times, the pain caused me to lose consciousness. Jesus had me realize that in this way I took part in His Agony in the Garden, and that He himself allowed these sufferings in order to offer reparation to God for the souls murdered in the wombs of [their]mothers” (#1276

The abortionists and the pro-abortion politicians in our society would quickly dismiss Saint Faustina’s profound experience. But oddly, neither the abortionists nor the pro-abortion politicians, especially Catholic pro-abortion politicians, would likely deny that God created them. The current radically pro-abortion president of the United States would probably admit that his existence is at least related in some fashion to the mercy of God. But the president and his pro-death allies have created a false distinction between their human lives and the human lives of the unborn, making humanity and human rights depend not on the existence of human life itself, but on the mere process of human birth. However, a child in the womb is no less one who has been fashioned and called into being by God than any other human being on this planet earth.

As the Church has never tired of telling the world, and American citizens and their politicians in particular, abortion is a denial of the humanity of the baby who is murdered by that cruel act.  But it is more. God is mercy, and mercy is life. Abortion is a denial of divine mercy. For that reason it is a rejection of God Himself.