Trending Now
You are at:Home»Featured»Migraines and Mental Illness: A Blessing in Disguise?
By Kay Anne Kelly on June 6, 2011 Featured, Live in Christ 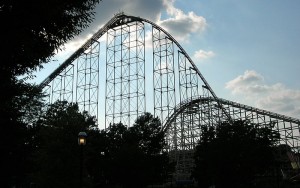 It starts around age 35.  For over a century is has threaded its way through the female side of my mother’s family.  My grandmother had it, my mother and her sisters had it, and my two older sisters are still dealing with it… five years ago it was my turn.  No, it is not finding out we are strong with the Force.  It is migraine headaches.

The most prominent memory I have of my mother is of her being in bed with a horrific migraine.  Sometimes an episode would last 3, 4 or even 5 days.  Dad would load her up into the old four-wheel drive and take her to the military hospital for a shot of Demerol.  This only dulled the pain; it never made the migraine go away.  When she came out of a migraine cycle (as we called them) her moods were more than just a little unpredictable.

I recall the bald spots on her head where she had literally pulled out her own hair in hopes of offsetting the agony within her skull.  Then there was the all night vomiting and the hours upon hours of paranoid yelling in a delusional state.  My mother did not just have migraines, she also had mental illness.  The combination allowed us to joke that we put the “fun” in dysfunctional.  Humor was quite often our only consolation amidst the madness.

At that time there was little the medical community could do to help migraine sufferers.  My mother had the double whammy of not coming off as believable to them due to her increasing mental health issues as well as the highly annoying fact that she had brought nine children into the world.  Many physicians basically treated her like she was getting what she deserved for being stupid enough to have nine kids.

My mother’s illness seemed to grow more pervasive in the years after my birth.  During the period that her healthy days were in the majority, this devoutly Catholic woman started the first Right to Life in our Colorado town.  She brought us along to Right to Life conventions, March for Life events, and had us walk with her at a pro-life parade in Chicago.  These memories would shape my own motherhood years later.

Mom’s increasing sickness did not dampen her sense of humor.  One lady, after Sunday Mass, came up to her and said, “Oh, you poor dear.  Nine children, you poor thing.”  (This was said right in front of me, her ninth child).  Mom looked down at me — smiled and squeezed my hand —  and said, “Yes, I know.  It is very difficult.  We wanted twelve and have to settle for nine, thank you for your concern.  We know we must be happy with what God gave us.”   She needed me to know that I was wanted and that I was loved, a fact I would need to hold onto in the difficult years ahead.

Going through adolescence without a reliable mother is a situation I would not wish on anyone, but with more than twenty years hindsight I can see where God, my siblings, and the prayers of unseen others, helped me to navigate this treacherous path.  Even though coming home from junior high and high school meant never knowing what kind of mood Mom would be in, I still felt blessed that I had a mother to come home to.  Most of the kids I knew came home to empty houses because their moms had gone off to work.  She might not have been all there, but she was still there for me in the way that she could be.

Dealing with migraines myself — today so easily treated with medication my mother never could have imagined — I feel very blessed to be able to be the mother to my own children that she could not be for me.  I have found myself tearing up as I drive my kids to dance, basketball or baseball, simply because I can do that for them — Mom never drove.  I never had dance lessons or participated in organized sports as there was no one to drive me.  This does not make me bitter (sorry, Oprah), it makes me grateful.

As I have gotten older, and the death of my mother, fourteen years ago, has allowed me more perspective. I have realized an important fact — the one thing that my mother never failed to hold onto is the only thing that could have made her suffering bearable… and the same thing any mother would wish to leave as a legacy to her children:  faith.  That faith would eventually teach me that her suffering and struggles were not in vain.

A song recently came out on Christian radio called “Blessings” — part of the lyrics goes like this:

What if my greatest disappointments, or the aching of this life
is the revealing of a greater thirst this world can’t satisfy….
And what if trials of this life
The rain, the storms, the hardest nights
Are Your mercies in disguise (“Blessings” – by Laura Story)

What if what I perceived at times to be weakness, was incredible strength?  What if the challenges of growing up with a chronically ill mother turned me into the best mother I could be?  What if she paved the way for my blessings with her years of untreated emotional and physical agony?  Whatever the challenges were and however much we kids “missed” due to her illnesses I always end up at the same conclusion: my mother lost her mind; she never lost her faith.

During the pain and stress of dealing with Mom’s illness I could not see it, but I now begin to recognize that all of that may just have been a blessing in disguise.  And now, when the lady at the check-out line notices my four kids with me and says, “Oh, you poor thing!  Four children!”  I simply smile, wink at the kids and reply, “These are just the four I brought…the other 8 are at home.”  I may be lying (okay, I was totally fibbing!) but I somehow sense my mother is laughing her head off in Heaven!

And when we get to the minivan with our groceries and my eight-year-old daughter tells me I need to confess what I just said I know that legacy of faith lives on.  If I had to choose between losing my mind and losing my faith I remember that only one of those two things will get me to Heaven.  I pray that no matter what challenges the increasing intensity and frequency of my migraines brings to me that I can hold onto the same thing my mother did, and leave to my own children a legacy that lasts for eternity.