Trending Now
You are at:Home»Columnists»‘Mommy Wars’ is Class Warfare in Disguise
By Marybeth Hicks on April 18, 2012 Columnists, Featured, Women 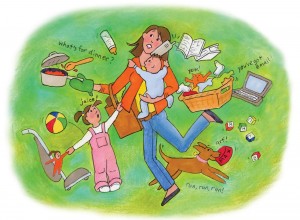 The smell of pot roast escapes from the lid of the slow cooker and wafts down the hallway to my home office. My washer and dryer hum harmoniously in the distance while generating hours’ worth of laundry for me to fold tonight after dinner.

Already today, I’ve paid some bills and balanced the checkbook, determined the next steps needed to help my son enroll in his chosen college for next year, and overhauled the volunteer list for a high school parent group I lead.

I even took a shower, the sign of a well-organized day for a work-from-home mom.

Which brings me to my next task: a column on the idiocy of political “mommy wars.”

To begin, like Ann Romney, I’m not so much offended by the offhanded slam hurled by apparent “superwoman” Hilary Rosen. Last week, in a flippant moment of punditry on CNN, Ms. Rosen declared that Mrs. Romney, having “never worked a day in her life,” is unqualified to advise her husband, presidential candidate Mitt Romney, on matters economic.

Mrs. Romney has quipped that the insult constituted an “early birthday present” because it gave her an excuse to speak out about her role as a stay-at-home mother and about the choices women ought to be able to make, free of judgment from feminists such as Ms. Rosen.

Having been in the public arena as a political wife for some years, Mrs. Romney isn’t riled easily, but she knows an opening when she sees one. And according to recent polls, her husband needs all the help he can get relating to and attracting female voters.

It’s been decided widely that Ms. Rosen’s supposedly impromptu remark officially has backfired. Women of all stripes, whether working or staying at home (or, like your humble columnist and a quarter of all working women, “all of the above”) seem equally annoyed at the suggestion that our national debate might benefit from this sort of catty dialogue.

Notably, in the ensuing week of “mommy wars,” Ms. Rosen and her apologists have only confirmed my assumptions about the true nature of her diatribe. It’s not the fact that Mrs. Romney stayed home that bugs these folks; it’s that she could.

Conservatives and women generally must resist the temptation to become defensive about the real work involved in being a mother and homemaker.

(Excuse me while I get the mail, switch the laundry, stir the slow cooker, email a teacher and take a call from a friend who needs transportation for her child after the track meet. Now, where was I?)

Right. It’s agreed by conservatives and liberals alike that staying at home with young children, keeping house and maintaining what is essentially society’s No. 1 small business – an American family – is exhausting, even on an easy day.

The more sophisticated assessment of last week’s “mommy wars” salvo is the realization that, once again, the left is seeking to pit Americans against each other by socioeconomic class.

According to Ms. Rosen, Mrs. Romney can’t possibly understand what it’s like to worry about the American economy because her husband is rich.

Never mind that, like many wealthy Americans, the Romneys started out with next to nothing – he didn’t build his career on inherited wealth but created it from hard work and intelligent choices – or that their success can serve as an example and inspiration to families all across the nation.

In Ms. Rosen’s puny world of class warfare, merely being financially free to choose stay-at-home motherhood disqualifies Mrs. Romney – and millions of others – from relevance in our national economic debate.

Shame on Ms. Rosen for opening such an idiotic can of worms and especially for contributing to class warfare in the name of women. Perhaps she should give herself a timeout to think about what she said.