Trending Now
You are at:Home»Featured»Money Changes Everything
By Jennifer Lahl on May 11, 2012 Featured, Reproductive Technology 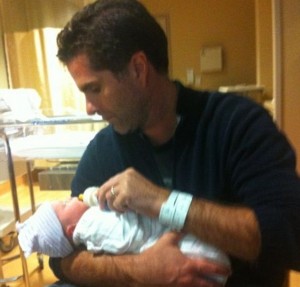 Tagg Romney and one of his newborn sons (via Twitter)

When the news broke that Mitt and Ann Romney welcomed grandchildren numbers 17 and 18 this past Friday via “gestational surrogacy,” those of us here at CBC central—who oppose commercialized conception—wondered where the bottom is in these murky waters of assisted reproduction.

Tagg Romney posted this on his facebook page after the twins were born:

Jen and I are happy to announce the birth of twin boys, David Mitt and William Ryder. Everyone is healthy and happy. They weighed in at 5 lbs 13 oz and 19-3/4 inches and 6 lbs. 13 oz and 19 inches. A special thanks to our gestational surrogate who made this possible for us. Life truly is a miracle, and we feel so blessed to be able to celebrate the arrival of these precious boys into our family. For those keeping score at home, these are grandchildren numbers 17 and 18 for my parents.

Time magazine has a list of “The Ten Best Chores to Outsource.” Expecting to see housecleaning, landscaping, pool cleaning—you know, actual chores—I was shocked to see the number one best chore to outsource was pregnancy. As the Time article put it:

Outsourcing brings to mind big factories and call centers. But entrepreneurs around the globe now offer services—from tutoring to sculpting a bust of your grandpa—to regular folks for a fraction of the cost in the West. Thought the world was flat before? Well, now you can hire someone in India to carry your child.

Outsourcing pregnancy has become big business, transforming having a child into a “bits and pieces” brokered industry: sperm from a handsome Scandinavian stud; eggs from a smart, beautiful Ivy League woman; a womb-for-rent from a poor woman in India trying to provide food and education for her children; and brokers in the middle helping set up the legal transactions to build a better baby the 21st century way. Just this past week, London’s Daily Mail ran a story titled, “The Designer baby factory: Eggs from beautiful Eastern Europeans, sperm from wealthy Westerners and embryos implanted in desperate women.”

Sadly, the “gestational surrogates”—truly desperate women—in these stories are identified as “uneducated, bare-footed, dirt-poor Indian women from outlying villages.” The surrogacy consultants who run the WYZAX surrogacy clinic assure intended parents that the surrogates will not get attached to the babies.

The Romneys didn’t have to exploit a poor woman in India. They chose to exploit a woman, probably much less poor, right here in the U.S. And their surrogate might not have felt so exploited. She was just “helping a couple have a baby”—and being compensated for her help. Because of little regulation in the U.S., commercial surrogacy is legal and couples like the Romneys don’t have to outsource their pregnancies to India. Our Canadian neighbors got it right when the Supreme Court of Canada wrote, “allowing the purchase of human gametes and surrogacy services devalues human life and degrades those who choose to participate in such a commercial transaction” (emphasis mine).

Many of the news stories I’ve read over the weekend about Tagg and Jen Romney using a “gestational surrogate” state that this means the child is biologically theirs. I’m not sure how the press came to that conclusion because a gestational surrogate only provides the womb. Gestational surrogacy is just the derogatory term for the woman who carries and gives birth to the baby. They could have used an egg donor, which would mean the egg donor would be the genetic mother. They could have used a sperm donor too, meaning Tagg wouldn’t be the genetic father of the boys, if that was the case. And all this, apparently ignoring the Latter Day Saints’ position on surrogacy (the LDS church strongly discourages surrogate motherhood). Tagg and Jen have used this same surrogate in the past to give birth to their first son.

The Daily Mail story reports, “[A]s human eggs cannot be frozen and transported, and there are few surrogacy clinics or wombs available for rent in Eastern Europe, these donors travel, at the height of their monthly cycle, to the United States, where the eggs are extracted and fertilised with the father’s sperm (which can be transported, frozen, from his country of residence, and stored indefinitely).”

Note: Human eggs can be frozen and transported. However, in 2005 the European Parliament issued a resolution banning the trafficking in human eggs because of abuses to young women whose health had been negatively impacted by selling their eggs.

Reprinted with permission by The Center for Bioethics and Culture