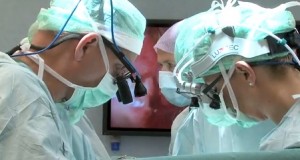 I have seen a lot of marginalization of children with artificial reproductive technologies, but I think this may take the cake. Never in my life have I encountered such a callous disregard for the health and well-being of a child that is so supposedly “wanted.”

Two women have donated their wombs to their daughters. A uterus transplant has only been done a handful of times, but never before from mother to daughter.

Before the transplant, the daughters underwent IVF to create their own children. If the uterus transplant takes, these embryos will be transferred to this experimental womb in a year. No joke. Doctors are willing to experiment with the life of another human being in a hand-me-down womb. From The Week:

Plenty of people say they’d do anything to have grandchildren. But that commitment was taken to a new level in Sweden recently, when two would-be grandmas became donors for the first mother-to-daughter uterus transplants ever performed. How were these ground-breaking operations carried out, and, more importantly, will they work?

Will the patients be able to have babies?
That remains to be seen. Doctors caution that the two uterus-recipients still face hurdles. It’s unclear how the anti-rejection drugs the women have to take might affect the fetuses, for example. Other unknowns: The placenta might not develop as it should, the fetuses might not grow properly, or the babies might be born prematurely. “We are not going to call it a complete success until this results in children,” Michael Olausson, one of the Swedish surgeons, tells The Associated Press. “That’s the best proof.”

That is a lot of unknowns to just blithely go ahead. I mean does no one care that this may permanently affect the health of another human being? What if the daughter begins to reject the transplant and the child dies as a result? What if he or she suffers a major birth defect if something goes wrong? What if the anti-rejection drugs do cause a problem for this child as he or she grows in grandma’s womb?

Talk about Russian Roulette with the life of a precious child. I am totally gobsmacked that this is even being allowed to go forward.

The Catholic Church warned us that this would happen. The Church told us that if we remove the love (you know that actual physical act of love) from procreation, children will become man-made objects to be manipulated and degraded. Children are gifts, not experiments. At least they used to be.