Trending Now
You are at:Home»Featured»Movie Review: Ben-Hur
By Sr. Helena Burns, fsp on August 31, 2016 Featured, On TV and Movies 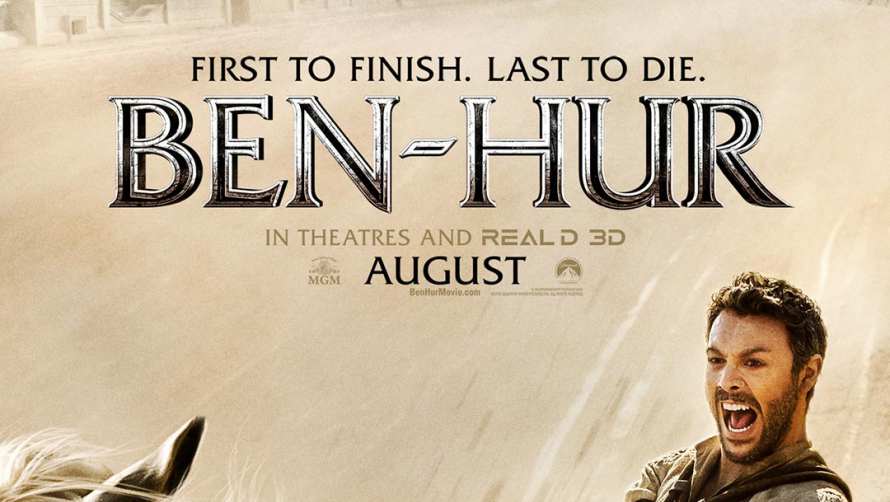 The latest big screen Ben-Hur is a fresh take on the beloved 1880 historical fiction novel: Ben-Hur: A Tale of the Christ by Lew Wallace that deftly and intricately weaves the story of Judah Ben-Hur into the Gospel account of Jesus. However, it sadly limps in the faith department, which, of course, is the punchline of the whole shebang.

With that, I am signaling that I assume you know the story and so shall be dropping SPOILERS in this review.

Judah is from a wealthy Jewish family living in Jerusalem along with his adopted brother, Messala Severus, a pagan Roman. At the beginning of the movie, they are best of friends and both avid horsemen (foreshadowing the famous chariot race between them at the end of the film). Messala leaves the family to join the Roman army. He wants to marry Judah’s sister, but he feels he has lived off the charity of Judah’s family all his life and wants to build his own life and fortune first.

Enmity between the Jewish Zealots and the Roman legions is heating up. Judah, a friend of Rome, openly opposes the rabble-rousers and believes in “keeping the peace,” even at cost of Jewish freedom.

Judah truly lives what he believes, doesn’t want to see harm come to either side, and takes active measures to calm animosities. But his flaw was in trusting Rome too much.

When he and his family are mistakenly taken for Zealots and arrested, he loses everything and winds up a galley slave. In his absence, Esther, his wife, becomes a follower of Jesus.

The cinematography is impressive from the get-go. The film wastes no time in back story, but plunges us into the hoof and heart pounding antics of Judah and Messala. Familiar characters like Pontius Pilate and Dismas pop up here and there, reminding us of the destiny that Judah is poised and privileged to be a part of.

Certain scenes could have been a little more nitty-gritty, particularly when Judah becomes a galley slave and then escapes and is afloat on the sea (he could’ve/should’ve been more beefy/burned).

Morgan Freeman puts in a solid performance as Ilderim, the wealthy horse owner. Ilderim’s role is rather major to the story’s turning, and Freeman accomplishes the task with aplomb.

In general, the acting is good, but not great. However, in the hands of a director who could have milked some of the well set up scenes (and epic scenery) for every ounce of danger and tension, it could have been much better. However, I cannot say this of the final chariot race which is the centerpiece and masterpiece.

The best fleshed-out character? Rome itself. The character of the Romans is constantly bandied about and three-dimensionally depicted. I felt that the “worthy nemesis” (Rome) needed a “worthy protagonist” (Jesus, and Judah’s eventual following of him) which the film did not deliver. There were some noble attempts, but it just needed to be so much stronger.

Jesus’ unexplained: “Love your enemies” in the face of the “might makes right” of Rome was screaming for so much more “showing” of how socially transformative Christian charity is — even at its birth. God’s love needed teeth (ideally in the depiction of Judah’s character arc) — teeth that were a match for Rome’s violence. I don’t think the film succeeded here. Judah’s mother and sister were not even cured by the blood of Jesus from the Cross (as in the 1959 “Ben-Hur”), but by rain running off the Cross.

This version of Ben-Hur is an exciting, even riveting at times, quasi-biblical adventure, but it falls flat when it matters most. I’ve just re-watched the movie-musical sLes Mis, and couldn’t help comparing the two. One is a CGI tour-de-force with fine action sequences. The other goes to the depths of human pathos and convinces us that misery and death will not have the last word, as it shimmers with divine hope.

Due to the gory violence and many CGI horses getting realistically destroyed, Ben-Hur 2016 is not for the kiddos.