Trending Now
You are at:Home»Featured»Movie Review: Brave
By Sr. Helena Burns, fsp on July 9, 2012 Featured, On TV and Movies 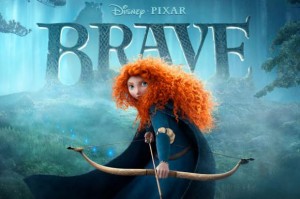 WARNING! This is more of an analysis than a review, so there are LOTS of SPOILERS!

I find Brave to be a subversive and kind of shocking movie.

First, what I LIKE about the film: the artistry/special effects are, of course, amazing. I laughed my head off at ALL the Scotsmen fighting scenes (with mandatory bagpipers accompanying each time), BUT, side note: name a man that is NOT a buffoon in this film.

I love that the protagonist is a spunky and talented young woman who doesn’t want to be married off in an arranged, political marriage in order to keep the peace. The three young men in question are certainly not her equal either.

I love that it’s a mother/daughter film—so rare! We are very aware of the tenor of father/child problems and there are plenty of these stories. Mother/child problems are more subtle and complex, especially between mothers and daughters. Bad Mommy, Mommy Dearest type films are anything but subtle, but rather over the top. I just did a Masters project on the history of women in film, and there is a whole tradition of “Evil Woman,” and “Momism” films spawned in part by a popular collection of essays by Philip Wylie in 1942 called A Generation of Vipers. Although Queen Elinor (voiced elegantly by Emma Thomas) isn’t portrayed as the epitome of evil, she is very harshly “punished” as though she were.

THE PLOT: Merida’s parents (we see more of her mother training her to be a princess than her father’s influence—the father seems to defer to the mother in what concerns Merida) are trying to arrange her betrothal to one of the sons of three other clans’ chieftans. This must be done to keep peace among the formerly-at-odds clans. The young man will win her hand in marriage through “games” of physical prowess.

I was totally buying into Brave until Merida visits a witch and asks her to cast a spell to: “Change my mother.” Not “change my mother’s mind,” but “change my mother.”  I think all of us can relate to some kind of rebellion or at least extreme “wishes” regarding our parents when we were teens, but wouldja go to a witch? If we are going to chock all of Merida’s extreme actions up to her simply being a teen, then maybe we shouldn’t have teens as main characters in stories because they are not capable of mature, responsible actions—something utterly germane to filmic storytelling (Hollywood does not do Aesop’s Fables, or short, cautionary tales for children). Do other child/teen main characters in films get this pass (Harry Potter, Twilight, Hunger Games, even Wimpy Kid)? No, they don’t. And while Merida’s impetuous actions may actually be truer-to-life than our sober young characters in these other films, all she is doing is making a bigger and bigger mess (from which she seems to learn very little except that her Mom always loved her).

Spent the Rest of the Movie Horrified

When the spell goes awry and Queen Elinor becomes a bear on the outside (with the threat of turning into a real bear forever (on the outside and “inside”—which we see her slipping into once in a while), I spent the rest of the movie horrified. Queen Elinor, of course, shared my horror. Merida? Meh. With repeated “it’s not my faults,” she barely seems to even care. But even before her mother becomes a bear, Queen Elinor eats a bit of cake with the witch’s potion in it and becomes extremely ill. Merida—that selfish, spoiled brat of a bad daughter—shows exactly zero concern for her mother’s welfare and asks her insistently: “Do you feel any different about the marriage NOW?” At this point, Merida might as well be a demon-child.

What Abouit Shape-shifters as Part of Fairytales and Ethnic Legends?

I am NO expert at this type of literature, but from what I’ve read shape-shifters can either be in charge of their OWN shape-shifting or their shape-shifting is “controlled” by others. Speaking of which, didn’t Merida do to her mother EXACTLY (but much WORSE) what she didn’t want done to herself? Someone else controlling her destiny?

I used to read this kind of fairytale when I was a kid. I remember something about a princess turning into a swan or something, but it was only during the day and then at night she was a princess again. These animal-shape-shifting seemed to be of shorter duration (for Mother Bear it was a huge portion of the film).

There is something fundamentally horrifying about humans morphing into animals. I remember being traumatized as a child watching Pinocchio grow donkey ears! Others have shared with me the same take-home terror they felt at this, too! So, parents, if you’re thinking of taking your kids, you may wanna process this with them afterwards AND, certainly, how Merida treated her mother (D-I-S-R-E-S-P-E-C-T). Me? If I was screening it beforehand for my kids? Wouldn’t take ‘em.

Native Americans, who live so close to nature and whose native religions were animist religions, tried to imitate the various gifts and strengths of various animals. This is something quite different.

Queen Elinor—you can imagine, even if you haven’t seen the film—is thoroughly HUMILIATED. I felt horribly humiliated FOR her. Of course, she feels like she’s naked and keeps trying to cover herself, but Daughter Dearest tells her in an exasperated voice: “Mother, you’re not naked, you’re covered in fur.” As a matter of fact, Daughter Dearest is exasperated with her mother the whole time. (Her mother can no longer talk, but only make bear noises.) She has to teach her stupid mother how to fish for her meal. We are supposed to feel this is a wonderful bonding section of the movie where the outdoorsy Merida introduces her refined mother to HER world. But it’s gross! It’s hideous! Her mother is wolfing down LIVE fish! Her mother is awkwardly bumbling and stumbling about in her new, huge, bulbous body. But in spite of her utter humiliation, she does not become angry at Merida or even berate her.

Brave smacks of revenge fantasy. Merida’s mother “never listened” to her daughter,” and now she is mute. This poised and ladylike royal now has to live quite literally like a wild beast.

Although Merida had to undergo intense princess training from her mother, she wasn’t exactly “tamable” or “containable” as she races off on her horse, Angus, to practice her archery and frolic in the forest. Merida’s parents never actually curtail her athletic pursuits. They are GOOD, NOT UNREASONABLE, loving parents who are simply following the status quo—for very good reasons. And Merida’s father—a wild man himself—is rather indulgent towards his chip-off-the-old-block daughter.

Merida is NOT “Brave”

Is Merida really “brave”? How? She’s energetic, she has a zest for life, but she’s self-indulgent, not brave. Is bravery and being strong-willed the same thing? Sure, she undertakes getting her mother changed back to a human. Um, that’s the LEAST she could do! But is she brave in doing it? Not really. She continues her brazen, reckless actions and even blows up the witch’s workshop in the process. She is not the one who kills the ferocious bear who is about to kill her mother.

Young people CAN change things. When they get older. When THEY wear the crown. Don’t we need to earn that right? Don’t we need some life experience? Don’t we need to actually test out what our parents say to see if it isn’t a better, wiser way? I sarcastically tweeted: “BRAVE—We might as well let young people rule the world because they’re always right.” Isn’t this the message in too many films these days?

It’s hard to exactly place a theme for the film, but it seems to be: be in control of your own “fate” or “destiny,” no matter what the will-o-the-wisps, witches, legends, traditions, or one’s own family says. (But of course, you can resort to magic when you really, really want something.) Speaking of magic, the quasi-evil witch actually cast a PERFECT spell that worked out PERFECTLY for our main character.

Brave is not so much a feminist tale (or even imposing today’s feminism on the past, because I’m sure there were plenty of Meridas who refused marriage in the Middle Ages!) as it is a tradition vs. change tale. Or rather, about not being afraid to find a new way of doing things. Merida doesn’t really compromise on anything though. The ending is left vague. Yeah, she’ll probably get married someday and become queen, and her mother helps her articulate this to the chieftans as “letting people decide their own fate,” or rather, the young men will have to try to “win her heart” rather than “winning her hand” via athletic challenges. (Yeah, right—that’s going to happen!)

Merida Does not Change

A “rule” of filmmaking is that the main characters should change, go through a journey of change. What they WANT should not be exactly what they GET. They should get what they NEED, not what they WANT, or what they WANT should undergo a transformation also. Not so with our heroine: she gets EXACTLY what she asked for: “Change my mother.” Her MOTHER undergoes the major transformation. At the end, Queen Elinor no longer wears her ever-present crown (bye-bye, authority!), literally lets her tightly-bound hair down, and is suddenly the “buddy Mom,” acting like a teenager with her daughter.

True, the witch tells Merida she must “mend the bond broken by [her]pride.” Merida simply sews up a tapestry depicting her family that she slashed in her anger. And finally, finally, at the very end, when it looks like Mom will be a berry and honey gobbling ursus for all eternity, she sheds some tears and says: “I’m sorry.”

Oh yeah, Merida has a set of triplet brothers with her same flaming, curly red hair. They look to be about five years old, max, but they are hardly ever interacting with or anywhere near their mother or father and seem to lead their own little parallel lives. No one even seems to be terribly concerned about their doings, whereabouts, or safety.

Despite its pervasive “feel good,” barrel-of-laughs ambience, Brave fails to inspire, teach, elevate, etc. It’s the same hackneyed “Follow your heart,” inspirational-Facebook-quote-of-the-day-happy-talk! Bend the world to your will. Get what you want. The world is your oyster. Look out for number one. Whatever it takes. And others? Well, I’m sure they can look out for themselves.

Merida’s treatment of her mother is just awful. That’s mostly what I’m left with.