Trending Now
You are at:Home»Featured»Movie Review: Cosmic Origins
By Sr. Helena Burns, fsp on September 4, 2012 Featured, On TV and Movies 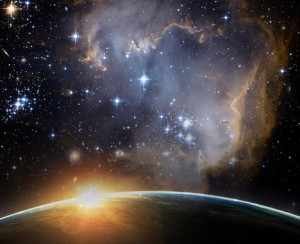 Got atheists friends or family? The stellar new DVD Cosmic Origins might help. In this film, some of today’s top scientists (many award-winning) weigh in on the mysterious origins of our universe. Old and new cosmological theories are presented, leading up to the possibility of an “intelligent Designer.” But the film, being mostly a scientific exploration and explanation piece, doesn’t harp on “intelligent design,” which, as Cardinal George tells us, belongs more to the realm of philosophy rather than either science or religion. Rather, physics is juxtaposed with a brief consideration of metaphysics. The tone in this film is one of informative scientific updating geared to the layperson and the message is conveyed without talking down to viewers. One does not feel bamboozled or railroaded by a sudden attack of “religious thought.” Instead, Jesuit priest Robert Spitzer (Magis Institute for Faith & Reason) introduces the concept of a harmonious relationship between science and belief at the conclusion of the film.

The format is diverse: footage of the universe, graphics, interviews, more than one live host, man-in-the-street opinions, etc. Cosmic Origins never lags, but there is a conspicuous presence of young adults, especially in the personalized but contrived man-in-the-street scenes. Yet with atheism and “unaffiliated” as the fastest growing religions categories among young adults, and the New Atheism movement proselytizing young minds and hearts, this might not be a bad thing.

Carl Sagan wanted the average person to be informed about science and was frustrated by what he deemed Americans’ “celebration of ignorance,” and famous atheist, Richard Dawkins, who held the position of Oxford’s Professor of Public Understanding of Science from 1995 to 2008, pushed his viewpoint often. It seems some scientists think that everyone must understand how the universe works and want to know the scientific explanation of the origins of the universe.

But it can be argued that the average person does not need to know these things to flourish. The universal longing for love, meaning, fulfillment, self-understanding, and a connection with others often trumps the desire for and acquisition of functional knowledge. But a curiosity about God’s astounding creation is still healthy for believers.

Also, we all have our own specialties. Does Dawkins know what a mechanic knows? Can he fix his own car? Sometimes, scientists have a kind of hubris, demanding that everyone bow down to science as the most important thing on earth.

For more information on this new film and screening packages go to: www.CosmicOriginsFilm.com