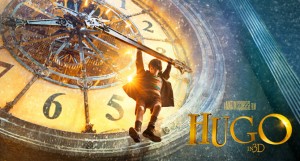 Hugo is Martin Scorsese’s engaging adaptation of the children’s book by the same name. What’s it about? It’s an elaborate introduction to a slice of film history.

The all-British cast plays out the story set in a 1930’s train station in Paris. At first, the story seems to be a tale of a misfortunate orphan-urchin in the line of Oliver, but we can’t help noting that this Hugo is no ordinary orphan. He is very good at fixing things because his deceased father was a watch/clockmaker (horologist) and taught Hugo the tricks of the trade. Hugo lives in the train station, unbeknownst to anyone, and keeps all its clocks running like, well, clockwork.

Hugo is a nod to *steampunk. There are puffing trains, vents, pipes, chimneys, sewers, as well as plenty of ticking and undulating gears in almost every shot. Even things like a mechanical toy store and live musicians with their instruments play into the “moving parts” theme. Bygones such as horses and (quel horreur!) mounds of hardcover books seem to be meant to make us yearn for a return to the past.

Hugo (Asa Butterfield) has an unpleasant run-in with a bitter old toyshop keeper (Ben Kingsley) in the train station, who recognizes the boy’s genius and eventually takes him under his wing. But Hugo doesn’t seem to be able to keep himself from unintentionally betraying and hurting the already-wounded man. Isabelle (Chloe Grace Moretz) is the shopkeeper’s goddaughter—also orphaned—who befriends Hugo.

The movie has a strong Theology of the Body theme: Everything has a purpose, even a machine. They do what they’re meant to do. If you lose your purpose, you’re broken. When something/someone can’t do its work, it makes them sad. Hugo and Isabelle wonder out loud what their purpose is. Being young, they then realize they haven’t found it yet. Isabelle wonders if she would know what her purpose is if she had known her parents!

The sub-themes in Hugo are: tinkering with machines, fixing things, everything having a purpose, magician’s tricks, dreams, imagination, film. Another theme is that of children coming too soon and uninvited into our lives to mess up our tidy little frameworks, our neat little plans, to try to pry into our secrets and closed boxes, and expose us. And in doing so, they save us.

The editing (Scorsese’s long time editor, Thelma Schoonmaker) really needed to be tighter and faster-paced (a few disjointed scene-cuts stick out like sore thumbs). There could have been more camera angles and cuts in general, but on the whole, it’s an eminently watchable film, especially when the movie delves into film history and recreates some of it.

*Steampunk (see also the newest “Sherlock Holmes” movies) is a movement that celebrates the mechanical age of actual, physical, clanking, whirring parts—hardware—that kept everything going, as opposed to our digital world of software and intangible “cloud computing.” The iPod is the ultimate anti-steampunk device: impossible to break into, take apart and put together again, mysterious, internal, unseen.