Trending Now
You are at:Home»Featured»Movie Review: God’s Not Dead
By Sr. Helena Burns, fsp on April 17, 2014 Featured, On TV and Movies 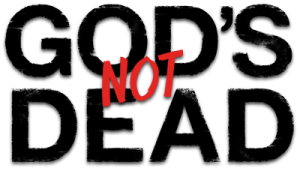 DISCLAIMER: Some Christians believe that any Christian film that is trying to do good and tell the truth should be praised and promoted, whether or not it displays excellence in filmmaking and theology/philosophy. I am not one of those Christians. You have been warned. Proceed with this knowledge.

The new Christian film: God’s Not Dead is a VERY mixed bag. It had such potential, an exciting premise, and set out to fill a huge gap, an almost untouched pastoral field, but I feel much of it was squandered and went awry. Why? How? First of all by not being faithful enough to the craft of filmmaking, and secondly, because Evangelicalism does not have a strong philosophical tradition (and is often even wary of good philosophy). If only Catholics could have helped on the philosophy stuff!

PREMISE OF THE FILM

A young Christian man goes to college and finds himself in an atheist professor’s philosophy course. The professor is intent on proving there is no God, or rather simply insists his students agree with him at the beginning of the year so they can get the God question out of the way. The whole class agrees, all except Josh. A series of classroom debates are set up between the young man and the professor, and the class gets to decide who they think is right.

WHAT’S GOOD ABOUT THE FILM

The acting of the main characters is totally up to snuff. The young Christian man, Josh, is played by the young but seasoned actor Shane Harper in a very believable manner (except that he is way too eloquent and polished at the podium right off the bat–but Josh IS planning on being a lawyer, so maybe we’ll give him a pass here). I love the way Harper projects this sweet, innocent-but-informed, unable to be intimidated Christian guy.

Professor Radisson is played to the hilt by Kevin Sorbo. (And he looks fantastic. He must have the same health regimen as David Bowie. I had no idea what a great actor this guy was. He has a commanding, sonorous voice and he plays hockey. What more could you ask for?) GND also stars Dean Cain, so we have Hercules and Superman in the same movie.

GND looks like a standard film of today (with no bells and whistles): excellent cinematography, set direction, (sufficient soundtrack).

Since many young people DO lose their faith in college philosophy (and other) classes due to the bombast of atheistic professors with an axe to grind, this film is altogether plausible. I wholeheartedly applaud the Christian filmmakers for addressing this elephant who has been reigning supreme and unchallenged in the middle of the room since, oh, only the 1960’s. And we Catholics, who used to teach philosophy (and even some apologetics) routinely in Catholic high schools, have completely dropped the ball for decades now. Shame on us!

“God’s Not Dead” makes some really good philosophical/scientific points. It also makes clear that being a Christian is not the “in” thing to be today. Family and friends won’t understand if we try to take our faith TOO seriously. There will be big risks, momentous choices and sometimes heavy costs–even when we are minding our own business. (The credits roll forth a long list of court cases in the USA dealing with religious freedom/persecution on campuses–it’s bracing.)

The best parts of the film are the debates themselves. Young people who see this movie will be exposed to the classic facile, often illogical arguments of atheist proselytism, BUT this time with rebuttals (almost all in the scientific realm).

BUT, the rebuttals do not go far enough, often appeal to the Bible/faith (flirting with reading the Bible as a science textbook), and Josh devolves into an ad hominem attack on Professor Radisson (using some personal information against him), and then devolves further into an all out emotional plea and then an altar call and then [SPOILER ALERT! SPOILER ALERT! SPOILER ALERT!] everyone, I mean everyone, comes to believe in Jesus/God. Which brings us to “What’s Not So Good About The Film.”

WHAT’S NOT SO GOOD ABOUT THE FILM

One of my biggest beefs with the film (besides the shoddy philosophy) is the way atheists are portrayed. Talk about reverse stereotyping. all the atheists in the film are incredibly shallow, selfish and cruel. (The students who all purport to be atheists but who then all suddenly believe are portrayed mostly as kind of mindless sheep.)

The dialogue vacillates from utterly realistic and brilliant to utterly silly and ridiculous. The young people in my theater–whom I think were Christian–appropriately snorted at each instance of “what planet are these people living on” dialogue.

As far as film structure goes, the set up is very well done, but we have an early resolution (which would normally be the end of the film) when Josh is victorious in the classroom. The rest of the film is one long epilogue of fairly disjointed vignettes. But the momentum/tension has already been broken.

Will “God’s Not Dead” be convincing to atheists, young people? Some of Josh’s nuggets from the debates should be helpful. I discuss with my Millennial young adult friends that Millennials want witnesses from among their own peers, so the figure of Josh is cool. But as for the:

1.) extremely overall preachy tone (especially the unnecessary and hokey subplot of two pastors–the Caucasian one being earnestly pompous: “It’s a sin to lie to an ordained minister,” and “Thank God I’m here so you can have a second chance with God”)
2.) non-Catholic view of faith (it’s a simple choice rather than a gift)
3.) overemphasis on free will with hardly any mention of love
4.) many magical “deus ex machina” happenings
5.) again, shoddy philosophy

would not convince me. I might even be insulted. AND at the end of the day, I don’t think argumentation is the best way to bring about faith. I believe it’s love, prayer, proclamation, example.