Trending Now
You are at:Home»Featured»Movie Review: Here Comes the Boom
By Sr. Helena Burns, fsp on October 29, 2012 Featured, Humor, On TV and Movies 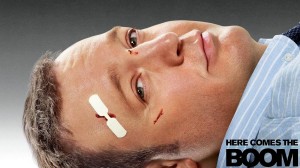 Here Comes the Boom is a very worthwhile film. It could even be seen as a definitive “teachers rock,” “save the school kids” film. Interestingly enough, another teacher/school film was just in theaters, Won’t Back Down, that beats the audience over the head with self-righteous, overbearing clichés (the trailer is just one cliché stitched to the next) about putting the kids first, we can do this if we have the will to; the Mom who’ll do anything for her child, fighting against all odds, yadda, yadda, yadda, and general “underdogmania”. Here Comes the Boom is not like that. All the right things are eventually and succinctly said (no speeches!) about what’s wrong with schools today and how to fix it, much of it boiling down to individual attitudes: that of a student, a parent, a teacher. It takes everybody. Everybody belongs. Everybody can contribute.

Scott Voss (Kevin James: a big guy with Chris Farley-like physical nimbleness) is the world’s worst slacker-teacher. We find out why; the system beats the idealism out of teachers, forcing them to be automatons, moving cattle through. But when the music teacher, Mr. Streb, (a warm and wonderful Henry Winkler) is on verge of losing his job (and the students their orchestra), Scott instinctively finds his inner hero and takes up mixed martial arts (where even losers make a lot of money per fight) to raise funds for the school.

Scott’s love interest,  the school nurse (a feisty Salma Hayek), turns down a date with him many, many times, but she’s waiting to see if Scott has any true passion and resolve for teaching (and life) left in him.

The always-slightly-offbeat situations are just delightful. The dialogue is constant, surprising, witty, and yet somehow perfectly normal—almost like a scripted Woody Allen film. Every scene ends on a high and hilarious note. There are no false notes in this film. This is a tight little comedy with totally at-ease dramatic moments that tie each movement of character and story together like smooth jellyroll filling. There’s almost a feeling of the most brilliant TV about it, like one of the very best episodes of Seinfeld. Originality abounds, and yet it’s also incredibly familiar and homey.

There are natural religious touches also: prayer before a fight, quoting the Bible about Jacob wrestling with the angel, “Holy, Holy, Holy.” Kevin James—in real life—is a practicing Catholic who prays outside of abortion clinics! There are also a few pro-life touches in the film which are a very unexpected but welcomed, such as the pregnancy of a 48-year-old woman.

There is one most unfortunate line that mars the film—TOTALLY NOT IN KEEPING WITH THE REST OF THE FILM. Scott’s married brother asks Scott if he needs to be “fixed up with some honeys, because I have some money set aside that she [his wife]doesn’t know about.” Really??? Pathetic. There should be nothing “on the side” in any marriage. If there is, you’re a tool. It’s just that simple.

Otherwise, the whole thing feels like it’s coming from a very good place, and the seasoned cast make acting look so easy. It’s obvious they were having a darned good time.