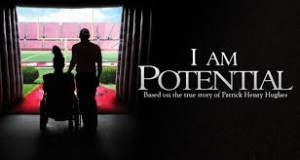 The new movie, I Am Potential, is based on the true story of the Hughes Family whose son was born without eyes and unable to walk. I almost didn’t want to even tell you that, because I had the experience of coming at the story cold, and was hit by the element of surprise at every turn. However, there’s no way to review this film without setting up a few essential background facts. If you’ve seen the film (with Cloris Leachman) The Woman Who Willed A Miracle, you are in for a similar, heartfelt, triumphant, soaring ride.

The film begins with a rather strained relationship between new parents, a sports-obsessed father, Patrick (Burgess Jenkins), and doting mother, Patricia (Evansville, Indiana’s own Jama Williamson!) When the extent of their son’s disabilities come to light and then become a daily reality, the marriage and paternal commitment is stretched even further.

SPOILER ALERT: I’m just going to have to tell you a little bit of the plot here, but the joy of watching the film (it is a joy) will be the well-executed details. Do you want to witness a conversion? The depths of a father’s love? Observe Dad slowly bonding with his little namesake–who will never be an athlete–but whom Dad recognizes has a love and talent for music from his youngest years. These scenes could melt boulders, and can be applied to any dad who has the eyes to see and appreciate who his child really is, to give up trying to fulfill his own ideas and dreams through his progeny. I really thought Dad was going to walk out for the whole first part of the movie. Just the opposite.

Patrick John and Patricia go on to have two more boys (able-bodied). Their firstborn, Patrick Henry (Jimmy Bellinger) grows into an optimistic young man with an upbeat disposition who simply never feels sorry for himself. I watched some YouTubes of the real Patrick Henry who cheerily states: “So God made me blind and unable to walk. Big deal! He gave me musical gifts!”

Even though the family has their many trials and makes many sacrifices, the love and positivity is, well, overwhelming at times. I’m not a fan of saccharine movies, but there are no “Hallmark” artificial sweeteners in Potential. This family is really a “can-do” family. We know there are families like this out there. We know there are physically and otherwise challenged individuals out there who act like Patrick Henry: overcomers. When I found myself skeptical at different points, I realized what was happening was that this film simply showed up my own healthy stores of cynicism and limited reserves of hope! Shamed by a film!

My glowing praise does not mean that this is a perfect film. There are lulls with absolutely no dramatic suspense or tension. There are bland scenes that begin without a hook, when there is not even one question in the audience’s mind (I wonder how this will get resolved? But what will happen when…?), but Potential is still worth every minute of eyeball time. I wouldn’t classify it as a “feel good” film because it’s too understated for that.

It’s much more an examination of fatherhood: one father’s hard decision to love his son without measure, to help his son succeed the way his son wants to succeed, to be a team of two. If Patrick John Hughes isn’t a reflection of God the Father, I don’t know who is. (You can also watch the real Patrick John Hughes being interviewed on YouTube.)

The soundtrack can be a bit Americana-grandiose and mawkish at times. And some of the sets, scenes and dialogue actually might be a little too “Leave It To Beaver,” golly-gee-whiz affable.

Patrick Hughes, Sr., reminds me of a man named Mike I met at a Blackhawks game. He had rink-side season tickets. His nineteen-year-old son Mike (also a “junior”) had severe autism and would go absolutely nuts (like any good Hawks’ fan!) when the team scored, shouting and banging on the plexiglass for all he was worth. Mike, Sr. told me his story: “I used to think there was something wrong with him [his son], and I was ashamed of him. Then I went to Medjugorje and realized that my son is fine: there was something wrong with me. Now our relationship has totally changed and I just enjoy him.”

“It’s not about what you see, but how you see it.”