Trending Now
You are at:Home»Featured»Movie Review: Jem and the Holograms
By Sr. Helena Burns, fsp on November 3, 2015 Featured, On TV and Movies 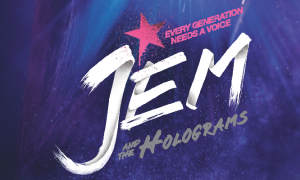 Jem and the Holograms is a live-action tween movie based on the animated TV series of the same name that aired from 1985-1988. Although I have been informed by some fans of the TV series that the film is not cleaving exactly to the TV version, it is nonetheless a delightful, “family-oriented” film that is innocent and fun, and skillfully avoids all kinds of pitfalls that a flick of this nature might have fallen into headlong.

I was all prepared to say that in many ways Jem is the anti-Pitch Perfect movie (something I would relish), but then I checked the lyrics to the songs used in the film and in the complete soundtrack. Please read on because there is a major, major CAVEAT with this film.

What pitfalls does the film avoid? It is not cutesy. There is no Valley Girl talk or vocal fry. The teen girls are not stereotypes of today’s radical feminist agendas, and neither are they Barbies. They seem like (albeit extremely well-groomed) regular gals. One is a little tougher than the others (she’s a hacker and has spent time in juvie).

The film also does not drown us in song after song after song. In fact, the musical numbers are well-placed and are mostly power pop, with one initial soft ballad.

Most, most unfortunately, however, the lyrics to some of the songs are very, very risque and beyond inappropriate for tweens or teens or anyone (although the visuals in the movie do not match at all–the songs are not acted out in any way). It may be a bit difficult to hear all the lyrics as they’re being belted out in the film, but of course young people don’t have this problem. This is a huge, huge drawback to the film.

Check out especially the words to “Mi mi mi“, which is used at least partially in the film. (I don’t remember hearing any of the most objectionable words from this song in the film, but still.) Other songs used in the film: “Youngblood,” “Alone Together,” “I’m Still Here.”

If songs with objectionable lyrics (very objectionable) were not included in the film or on the soundtrack there would be no problem here. But there is a problem. A big one. Why should we wonder why our young people engage in bacchanal-type sex on college campuses when they’ve heard this stuff from their tenderest years in “PG” movies? Sigh.

I’m sad to say this film was too good to be true. Very sad to say. Unless you are willing to have a serious discussion with your young people about the lyrics to ALL the songs on the soundtrack, I’d say this is a “no” film.

But why not have that discussion? Ask your young people what they think of these lyrics. Take this opportunity to do some Media Literacy and Theology of the Body with them. There are many, many good things about this film, but they are totally undermined and undone–perhaps even destroyed–by the lyrics to some (not all) of the songs featured in the film and on the soundtrack.

Jerrica Benton (Aubrey Peeples) whose stage name is “Jem,” becomes an instant, viral internet sensation when she dons a crazy pink wig and sings a sensitive ditty into her webcam. Her three sisters (one blood sister and two cousins, all being raised by their aunt–but they all consider themselves true sisters) are her band. A star-making music company (appropriately called “Starlight”) comes calling in the person of Erica (the inimitable Juliette Lewis, digging her fangs into every scene and stealing it). Lewis could really make a new career out of playing luscious modern-day villainesses.

After seeing the trailer, I thought the film might be a good exploration of what “fame” means today, and it is. But it’s even more focused on family. Jem and her sisters are all about family, about being a family. And they’re all about their music. The “famous” thing for them is a just a great way to spread the love, and get some badly-needed cash so they don’t lose their house. (Molly Ringwald, as the devoted aunt, has one of the best lines in the movie–aimed at Erica–that pretty much sums up the whole fame thing).

Jem lost her Dad when she was young. He encouraged her in her musical abilities and gave her words of wisdom to live by. He was also working on an invention before he died: an adorkable little robot named “Synergy” who gets mysteriously activated at the same Jem’s career takes off. Synergy is the most fantastical part of the film, which otherwise might pass as a non-sci-fi film.

Jem’s relationship with her Dad is really the heart of the story. He is the unseen guiding light. There is a mild romance between Jem and Rio (Ryan Guzman), Erica’s son, which culminates in a kiss at the end.

The entire feel of the film is that of an after-school special. It’s not a “big” film, and it’s pretty low on hype. The girls remain incredibly grounded through their whole experience, even through their one big crisis and band breakup–which alone can speak volumes to a starry-eyed, “everyone-is-having-their-15-minutes-of-fame-now-in-our-digital-world” world.

The clever, thoughtful backbone of the soundtrack is actual uploaded-to-the-internet amateur musician videos (often just doing rhythms and beats). How do we know they’re videos? Because we see them briefly, intercut with our characters’ story. There are also lots of fake “Jem and the Holograms” fan vids throughout the story that feel very authentic.

Stay for the credits or you’ll miss the lengthy zinger leading directly into a sequel where rival band “The Misfits” will thicken the stew.