Trending Now
You are at:Home»Featured»Movie Review: Kid-Thing
By Leann Barna on January 28, 2012 Featured, On TV and Movies 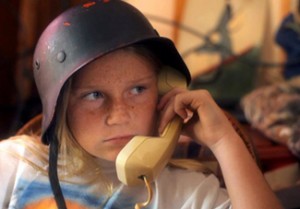 Kid-Thing (shown at the Sundance Film Festival) examines the relationship between loneliness and hope as Annie (Sydney Aguirre), a 10-year-old only child, who is neglected by her alcoholic father, spends her days trying to entertain herself by creating trouble. Her misbehavior carries a suspenseful edge. Whether she is stealing food from a convenience store, throwing dough at passing cars, or smashing a birthday cake while an unsuspecting family stares on in shock, Annie is constantly in danger of detection by different adults.

But then Annie hears a voice. Not an encouraging voice, or a stern voice telling her she is being naughty, but a desperate woman’s voice screaming for help to escape from the bottom of a well. Any normal child, or even a slightly abnormal child like Annie, would instantly run for help to try to save the woman’s life. But Annie runs home, and tells no one of her terrible discovery.

Soon Annie is bringing food, toilet paper, and a set of walkie-talkies to the voice so she can communicate with the voice from her home. The voice still begs for help, but it is obvious that Annie has little to no intention of getting another adult to help. The entire situation becomes unrealistic and frustrating as Annie gets angrier at the voice for no apparent reason. But then there is a breakthrough. This spunky, yet damaged little girl promises to get help, but only if the voice promises to take Annie with her wherever she goes.

The voice becomes Annie’s hope of a better life, a means to defeat her loneliness and a life away from her unstable father. As long as Annie keeps the voice trapped in the well, she always has someone to talk to and has someone who cannot abandon her.

The whereabouts of Annie’s mother are not revealed in the film, but the feminine voice coming from the well speaks both sweetly and harshly to Annie. Annie’s relationship with the person behind the voice begins to reflect a motherly relationship but one in which Annie is in control. This time the authority figure of the voice is at her mercy.

Unfortunately, before Annie has a chance to build a solid relationship with the voice, it disappears. Annie begs the voice to return, and pleads with the voice to accept the deal she offered to her, but the silence coming from the well is piercing.

Annie’s hope seems to be at an end when she watches her oppressive father have a heart attack while feeding his goats. Annie takes this as her chance to break free from her dismal surroundings and follow the last bit of hope she had–the hope from the voice.

This film both upsetting and inspiring. Annie is a poor little girl who is trying to deal with a horrendous situation that is totally out of her control. She shows little emotion, until the voice arrives. Then her emotions lead her to choices that are not appropriate for the situation, which results in her driving the voice away.

When the voice goes silent it is difficult to ascertain whether the woman behind the voice found a way out of the well, or died because Annie never got help. Either way Annie’s refusal to help the female voice may have killed Annie’s chance to find hope as well.

Kid-Thing does a great job of demonstrating the hopelessness of Annie’s life. It also portrays how easy it is to squash a child’s passion, make a child guarded, and push a child to detachment from her own emotions. Consequently, when hope is introduced, Annie does not know how to react, and treats the situation the only way she knows how–by making sure she doesn’t get hurt again. Finally, with nothing left,  Annie must decide weather or not to follow her only possible path of redemption.

At times this film is unclear and there are many questions left open ended. I was thankful for the children in the audience who stood up to ask the tough questions of the director after the film. Honestly, they were on every adult’s mind, but we were too embarrassed to ask them and admit we didn’t totally understand the movie. Yet after reflecting more on this film, I realize the power is not in the unanswered questions, but in the idea that hope and companionship are what drive people to do make either right and wrong choices, and in this film it is apparent even in, and to, a child.