Trending Now
You are at:Home»Featured»Movie Review: Light of Love
By Sr. Helena Burns, fsp on October 18, 2013 Featured, On TV and Movies, Vocations 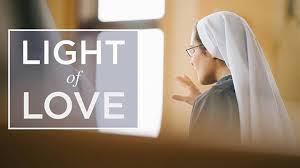 “Imagine Sisters” greatest success has been on an eponymous Facebook page which currently sports over 16,000 “likes,” and has more than 2,000 “talking about this” at any given time. The Facebook page features many different congregations’ photos, links, retreat events, and the ever-popular nun memes. It’s serious and funny, poignant and light-hearted. The aim? To SHOW the joy and simplicity of the calling to be a bride of Christ; to be a meeting place for young women in discernment; and to make the charisms and ministries of various congregations known.

The priesthood has had the glorious Fishers of Men film/DVD to portray and encourage priestly vocations (commissioned by the U.S. Bishops) for several years now, but there was no film on the Sisterhood. Until now. “Light of Love” is meant to fill that need. Individuals, young women, non-Catholics, Catholic schools, religious education programs, RCIA, and any other gatherings of the curious will now be able to hear it from “the horse’s mouth”: these women of God explaining their way of life.

Five congregations were highlighted. One Sister from each congregation is interviewed, and we follow her through her day: prayer, community life, ministry. We also get to hear something of her own vocational story, struggles and joys. The “Imagine Sisters” movement is often criticized for painting “too rosy” a picture of religious life (on their exuberant Facebook page)—but certainly an ideal is being put forth there. The film, Light of Love could never be accused of this. It is a minimalistic, almost understated take on feminine religious life. No bells and whistles, very little music. It doesn’t get any realer than this! (My favorite profile is that of the Salesian Sister at the end. She seems to blend an extremely active life—she’s a vice-principal—and a life centered on her Spouse and holiness with such ease and peace.)

The five communities chosen are all active congregations (no cloistered), but with varying degrees of contemplation mixed in: Carmelite, Salesian, a newer congregation founded in Argentina, and two Franciscan congregations are represented. Healthcare, education, and working with the poor are the ministries of these particular Sisters.

Where can you view “Light of Love”? Free, online! YouTube or www.ImagineSisters.org