Trending Now
You are at:Home»Featured»Movie Review: Restless Heart
By Leticia Velasquez on September 1, 2012 Featured, History, On TV and Movies 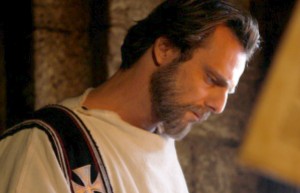 Every Christian has heard about the stunning conversion of St Augustine, the most famous doctor of the Church. His wisdom permeates Western culture and Catholics are familiar with his saying, “You have made us for Thyself, O Lord, and our hearts are restless until they rest in Thee”. We have heard about St Augustine’s long suffering, prayerful mother, St Monica, whose feast day precedes his on the Liturgical Calendar. Many Catholic mothers consider St Monica their patroness as they intercede for children swept out of the Faith by the wayward culture. Yet, few Catholics know the details of Augustine’s life story told in his Confessions and it is this void, which the film Restless Heart seeks to fill.

Born to Patricius, a pagan Roman official and Monica, his Christian wife, Augustine showed great promise at a young age and felt that his backwater town in North Africa was not able to give him the education he required to develop his gift for rhetoric.  He was disgusted by his father’s drunkenness and womanizing and contemptuous of his mother’s prayerful suffering as she served her family’s needs. Augustine was meant for better things, he reasoned, as he watched the famous lawyer Microbius and longed to be tutored by him.  Patricius did not have the funds or the desire to send him to study but Monica found a sponsor for her son and convinced Patricius to allow him to leave home.

Soon the brilliant Augustine became a renowned attorney winning case after case, relishing his fame and the pleasures of the flesh. He visited home expecting his mother to be proud of him, but she reproached him about the fact that he helped a guilty man avoid prison and return home to murder his wife. Monica was nursing Patricius in his final days and rejoiced as he finally asked to be baptized. Augustine scoffed at Baptism. He had embraced a life of sin, and even had a concubine who was to bear him a son.

Though Monica cared for Augustine and his family, she told him that she did not approve of his lifestyle and prayed constantly for his conversion, even as his friends got him involved in the cult of Manichaeism.  Soon his restlessness drove him to leave his family behind without notice, traveling to work for the Empress of Rome as her orator. Augustine had surrendered completely to the lure of fame and wealth, and his seemed a hopeless case. But as Bishop Ambrose had warned him, the Truth soon caught up with Augustine.

No need to worry about spoilers here. Catholics know this story has a miraculous ending, which brings Augustine more fame than he could have achieved in his secular career, thanks to the faithful prayer and loving example of St Monica. What viewers will be fascinated to see is exactly how a famous man who had everything to lose by becoming a Christian did so, and found peace for his soul in the Church.

If ever there was an ancient story which is relevant to our contemporary culture, this is it. Few Catholic families are without a wayward son or daughter, whose restless heart have led them from the faith of their parents into the spiritual desert of modern society, which is no less debauched than Rome in its final days. Viewers will be engrossed with this film, with its top notch acting, moving score, stunning cinematography, and climactic ending. I recommend it for adolescents and up, due to some scenes involving drunkenness, adultery and violence.

This film should be part of every parish and Catholic home DVD collection and for a limited time can be shown at privately sponsored screenings.  For more information go to: http://www.ignatius.com/promotions/restless-heart-film/