Trending Now
You are at:Home»Featured»Movie Review: Super 8
By Sr. Helena Burns, fsp on June 25, 2011 Featured, On TV and Movies 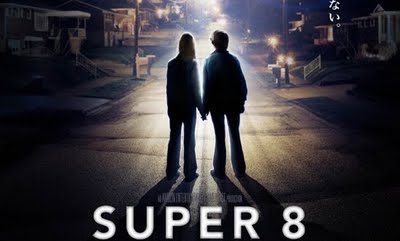 Super 8, written and directed by the prolific TV/movie guru, J.J. Abrams (Alias, Lost, Star Trek  prequel, Cloverfield), is a collaboration with his hero, Steven Spielberg (who similarly started very young shooting “movies”). Actually, Abrams has known Spielberg since he was 15, but that’s another story.

Super 8 is a semi-autobiographical story—set in 1979–about a bunch of middle-school friends who set out to shoot a zombie movie when they witness (and get on their Super 8 camera) a train crash involving the paranormal.

Charles (Riley Griffiths) is the demanding and overbearing natural-born director who uses big words and proper film terminology (and who also uses an unnecessary amount of profanity and blasphemy: “God,” and “Jesus” are every other word). I know that’s supposed to be his schtick, but it’s ugly, especially out of the mouth of such a young dude. “God” is bad enough, but I cringe every time I hear “the only name by which we may be saved” taken in vain. The Holy Name Society encourages us to whisper (or shout if you like) “…may He always be praised,” whenever we hear His name slandered. Hey, it’s giving us the opportunity to praise!

Joe (Joel Courtney) is the main character, and he’s, well, luminous. Kind of looks like and reminds me of the kid in Almost Famous. He has a crush on the female lead, Alice.

Cary (Ryan Lee) is the natural-born camera/SPFX guy (or maybe just a pyro) who looks like a little Tom Petty and provides comic relief and fireworks on call.

Martin (Gabriel Basso) is the male lead and a big chicken.

Alice (Elle Fanning) is the scrumptious female lead and natural-born actress. There are two wonderful scenes where she dazzles and enchants the guys with her ability to emote. Her character is sweet, sensitive, strong, reserved, and, at times, uncertain. Quite age-appropriate.

Super 8 is extremely reminiscent of Close Encounters of the Third Kind: the wind, the night skies, the shining lights, the alien presence, the supernatural abductions, take-over of cars/electricity/energy sources, the pregnant silences followed by sudden jolts. It actually feels more Spielbergian than Abramsian! However the “monster” is pure Abrams, extremely reminiscent of Cloverfield, especially the slow reveals and the noises IT makes.

The middle-schoolers are truly middle-schoolers with a certain innocence to them. Middle-schoolers should LOVE this film of which they are the stars as well as the stars of the film-within-the-film (make sure to stay for the credits to watch the kids’ finished zombie film). Super 8 is especially pertinent today with virtually every young person shooting video from their childhood on, on inexpensive, high-quality video phones and other handheld devices. The child actors are pros, and the story is truly told from a tween POV by filmmakers who are still in touch with their own youth.

THEOLOGY OF THE BODY: Joe and Alice have both lost their mothers and have rocky relationships with their Dads. The lack of the feminine/motherliness in both their lives (and that of their fathers) leaves a gaping hole. This is portrayed in a true-to-life way, and I believe that Spielberg and Abrams (both good, wholesome family men), really believe in this ying-yang, but I have to say that it does feel like our emotional buttons are being very deliberately pushed here. (Which I never mind, but other movie-goers may. I’m a big fan of emotions.) The MOST Theology of the Body scenes for me are Alice’s acting and the guys’ reactions, and another lovely scene where Joe watches a home movie of his deceased mother with himself as a baby and says: “She always looked at me like I mattered, like I existed.”

The 1970’s era is captured well with lots of great artifacts: macramé owl wall-hanging, TAB, Soviet scare, “Keep on Truckin’,” CBs, dial-phones (how did we STAND that?!), Pillsbury foodsticks.

The plot is very familiar, but enjoyable. I left the theater smiling. Broadly.

–The use of unknown actors (except for Kyle Chandler as Joe’s Dad) really works well—gets us focusing on the story.

–Lots of “historical” guffaws: “There is no overnight developing of film.” The first cassette Walkman: “a slippery slope.”

–Spielberg loves TV! He always has TVs going in the background in people’s homes and we can always catch what they’re saying….

–Good “drugs are bad” lesson. Older teen misses all the fun and is useless because he’s stoned.

–Super 8 was edited by two women.

–No super-long chases. They’re very short-spurt-chases. Sr. Helena likes this better than long, boring chases. But she does like long, exciting chases (like in The Island on a SoCal freeway).