Trending Now
You are at:Home»Featured»Movie Review: The Hobbit: The Desolation of Smaug
By Sr. Helena Burns, fsp on January 9, 2014 Featured, On TV and Movies 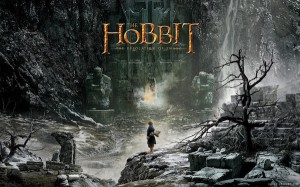 The Hobbit: The Desolation of Smaug is, of course, Part Two in a three-part cinematic extravaganza of Tolkien’s beloved book: The Hobbit. How did Peter Jackson and Co. get three movies out of it? By drawing on The Silmarillion and other background information. Perhaps some Tolkien purists are not happy with this amalgam, but for the rest of us Tolkien schleppers, we’re just happy to get more, more, more!

The Desolation of Smaug is a bit different from the first Hobbit installment. It is not as cohesive, “talkie,” and some of the editing/cuts are just horribly jerky and unprofessional. I saw it in 3-D, and as scenes move between indoor (very dark, dreary and colorless) and outdoor (not much better), the resolution is so extreme and raw that it often looks like some strange telenovela. All the actors are exquisite as in Part One, but the whole texture of the thing (and poor editing) often makes them look ridiculous (e.g., holding grim, melodramatic stares for far too long).

It’s obvious that the bulk of the time, work and attention in the film was given to the lengthy, often comical “Bilbo and the Dwarves Ride the Rapids in Barrels While Pursued by The Ugliest Orcs in Middle Earth History,” to much good effect. This action-packed, eye-popping caper alone is well worth the price of a movie ticket. Lithe Elves get into the act and show that brute strength (and fearsome ugliness) and massive Iron Age weapons aren’t everything.

How is the estrogen count in Part Two? Galadriel puts in a fleeting cameo as she telepaths with Gandalf. Turiel (a general in the royal Elvish guard, played quite marvelously by a glowing Evangeline Lilly) has a large role defending the Elvish kingdom/territories. Not only that, she is sweet on a particular dwarf (and therefore sets out to save his life) and risks everything to fight against evil rather than passively remain safe and do nothing, as her liege lord commands her to do.

The dialogue is minimal and stilted—even though there were two male and two female screenwriters! (Did you know that screenwriters in the 20’s and 30’s were primarily women because we’re so good at dialogue? Yup.) Smaug has all the best lines.

But who makes the film (as usual)? The great Gandalf the Grey (a masterful Ian McKellan that no amount of bad editing and/or lighting could ever vex, harry or perturb). Can’t we just have a “Gandalf” film? All Gandalf all the time? The elderly wizard is the one who seems to see the biggest picture, have the broadest vision, is most aware of what is coming and what is truly going beneath the surface. And yet—and this seems to me to be the whole message of Tolkien’s tale—he, too, is weak in the face of tremendous, vociferous evil. But it is the weak who win the day. The Elves even find the greatest grandeur not in the Sun or lightning (or fireball-breathing-dragons) but in fragile starlight.

It’s a paradox that those who live by no other code than “might makes right” and “the triumph of the will”, who are not held back by any mercy or ethical considerations, are actually the weakest. The wicked may flourish for a time, but the kind of persistent gentle Goodness that caused Herod to fear a baby and murder babies is what endures.

While the other denizens of Middle Earth go about their more or less important chores and quests, Gandalf is busy weighing how evil organizes and operates itself in order to sweep over the land and cause woe to untold numbers (the influence of World War I on Tolkien, no doubt).

This film is more gory and violent than the first one:  gratuitous and “humorous” violence (e.g., the way Orcs’ heads get chopped off, etc.) doesn’t make me laugh.

The Hobbit is also a study in greed and what can drive men to utter blindness and destruction of friends, loved ones, the future and everything around them (the Ring, the Arkenstone). Smaug portrays the larger, supernatural (spiritual warfare), demonic greed at work in the world.