Trending Now
You are at:Home»Featured»Movie Review: The Mighty Macs
By Patti Maguire Armstrong on October 21, 2011 Featured, On TV and Movies 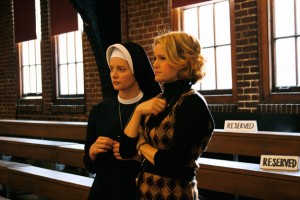 The Mighty Macs is the kind of film that makes you want to cheer from your seats. It’s a Cinderella in basketball sneakers story of an underdog earning the crown. The film is based on the true story of the 1971-72 Immaculata University women’s basketball team. This small — under 800 students — Catholic women’s school just outside Philadelphia, did not even have a gymnasium. It had burned down the year before. Against all odds, the Mighty Macs won the country’s first National Women’s Basketball Championship and held the title for three straight years.

During a press conference in Philadelphia before the world premier showing, I learned that the magic on screen is a reflection of a unique real life script that happened forty years ago.  The young women were there for an education but also loved basketball. There were no sports scholarships for them in those days. They just showed up to try out for the team.

Recently married, after two years of teaching, Coach Cathy Rush was simply keeping busy before starting a family while her husband traveled as an NBA referee.  She accepted the job for $450 a year. “I was only twenty-three and some of the girls I was coaching were twenty-one,” Cathy laughed, “But they always treated me with respect.” Going into the job, she said her expectations were zero. “Then, when I saw them play that first day, I knew they were good, very good,” she said.

Cathy watched how the men played the game and brought those techniques to her team. “I didn’t feel like we were making a statement,” she said. “It was an issue of believing in what you are doing.”

It was a one of a kind, one-time story. After winning the championship for three years, she retired in 1977, to raise her family. Her record was 149 and 15.  The school never did offer athletic scholarships to women even after Title IX, so this Division III school is not able to attract top athletes.

Although it’s a formula sports story, it’s also a real life happy ending.  It delivers the action but is also a movie of being –those 70’s plaid bell bottoms and a school staffed by nuns in full habits is a glimpse into what was. The world was on the precipice of change and this women’s sport’s story became a part of that history.  “They really captured the story,” Cathy said.  And since the sisters of Immaculata were given final say on the script, it stayed squeaky clean.

Writer/director/producer Tim Chambers is a hometown boy  with the connections to pull in the talent and financing.  “I had been approached before by people who thought this story should be a movie, but not until Tim Chambers approached me did I believe it was really going to happen,” said Cathy.

The city of Philadelphia has rallied around this this movie — their baby — in a big way. Media coverage spans from the original reporting of the Mighty Mac’s road to the championship (a first for such coverage of women’s teams in this sports-minded city) to covering the production, and World Premier showing. It was filmed in Pennsylvania with much of it at Immaculata, which is now co-education.

Mighty Macs is an uplifing film that captures the sport of girls basketball during a time of purity — when basketball was played for basketball’s sake. There are few sports films about women’s teams and this one will inspire and entertain.

The Mighty Macs opens nationwide on Friday, October 21st 2011 and is rated G.