Trending Now
You are at:Home»Featured»Movie Review: The Song
By Sr. Helena Burns, fsp on September 26, 2014 Featured, On TV and Movies 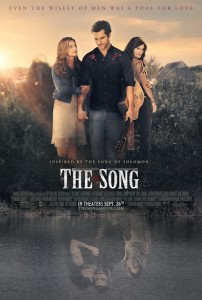 The Song is a new Christian film inspired by “The Songs of Songs” (aka “The Song of Solomon”) in the Bible. It is one of those distinctly southern/country culture films, with the two main characters being Christians themselves.

It’s a story of adultery. A story of career vs. vocation, and spouses who are physically separated growing apart. It reminds me of the Christian film “October Baby,” in that the first half is poor quality and the second half gets real.

It’s a story of love, marriage and the meaning of life.

The first half is barely one-dimensional. We don’t get to know the man (Jed–Alan Powell) and woman (Rose–Ali Faulkner) who get married and whom we are supposed to care about for the rest of the film. But we do get to know them later through their sins, in a sense.

However, there is nothing distinctive about this man and this woman. Nothing unique, original. No defects, dreams, quirks, secrets, experiences, events, histories or desires that are not totally generalized as Everyman and Everywoman. The plot has a few surprises, but there remains very little subtext throughout.

The film is interspersed with very effective voiceover of actual passages (recited by the husband) from the Song of Songs interwoven with Ecclesiastes. They are recited with aplomb in a semi-contemplative, poetic way.

This is a man’s film, a man’s perspective, and not only because the main character is male. There are definite shades of “women are either idealized virgins-brides-wives-mothers or pure temptresses.” No nuance, nothing in-between. The writer-director, Richard Ramsey, did not seem to be able to imagine a woman’s inner life too deeply.

The two women actresses do fabulously with what he gave them (and Alan Powell is an accomplished actor/musician as well). But the film does illustrate for men what men really want. I’m sure this film could touch the hearts of many guys.

The film is aptly named, because there is a lot of music throughout. Mumford & Sons style tunes. Whole songs and snatches of songs. When one song ends, another one begins almost immediately. There seems to be more lyrics than dialogue. But, of course, that is also a way to move the story forward and convey sentiment. Since Jed is a performer and lives in a big way through his music, spending much of his time on stage, we are joining him in his element.

The fighting seems to be more real than the loving between Jed and Rose. Perhaps because the romantic scenes were so saccharine while the clashes were so volatile and even mean (irresistible for actors)! And Jed had some “excellent” excuses for his behavior. Rose also had some great reasonings and justifications on her side. The marital difficulties felt so authentic—too bad the chemistry wasn’t also as palpable.

Am I being too critical of this film? I think not. Gotta call ‘em like I see ‘em. Would I recommend a look-see? Yes. I think The Song challenges us to fill in our own blanks: What is the authority of Scripture in our lives? What are our ambitions? What are our duties to God and the ones we love? Where will we truly find fulfillment?