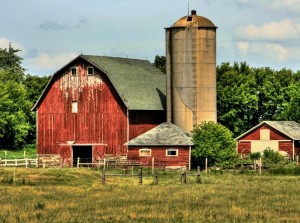 Thanks to David Bovee’s new book about the illustrious history of the National Catholic Rural Life Conference, The Church & the Land, one of the luminaries who helped shape the rural church in America once again resurfaces: Msgr. Luigi Ligutti. His classic book Rural Roads to Security, published in 1940 [and reissued this year], thoroughly documents the dramatic effects of modern capitalism on Depression-era rural communities. With painstaking detail Rural Roads describes how modern capitalism devastated the agricultural foundations of our country and how advocating the re-population of rural towns will help us regain independence for the family from the rising servility of dispossession.

Aloysius Domenico Ligutti was born on March 21, 1895 in Romans, Italy. Following the death of his father, the teenage Luigi and his mother moved to Iowa where he continued his studies in preparation for the priesthood. After completing seminary in Maryland and graduate studies at Catholic University of America, Ligutti traveled back to his adopted state of Iowa. As pastor of Sacred Heart, Ligutti’s attention turned to the spiritual and material struggles of rural life and Iowa’s deep-rooted farming culture, a culture which has, according to Pope Pius XII, “essentially a family character and is, therefore, very important to the social and economic prosperity of the whole people.” In 1940, with the mission of bringing “Christ to the Country—the Country to Christ,” Ligutti became the executive director of the National Catholic Rural Life Conference—an organization founded 17 years earlier to serve the needs of the rural church and attract a stronger Catholic presence in pagan-dominated areas. As the voice of the Catholic rural movement in America, Msgr. Ligutti urged a solid investment in Catholic social doctrine to remedy the ills caused by the Great Depression. 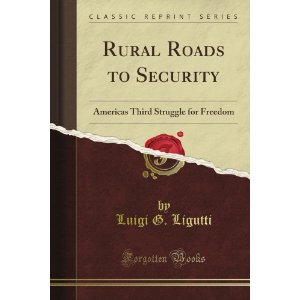 Published in 1940, Rural Roads to Security was the monsignor’s only book, co-authored with Fr. John C. Rawe, another strong advocate of the Catholic rural life movement. According to the authors, the philosophical and scientific acceptance of Economic Liberalism (capitalism) led to the loss of family holdings and homesteading. “Materialistic philosophers taught that liberalism, free and unrestrained, would bring the nation to the peak of prosperity.” The promise of this new era in human history crushed the American economy. It encouraged self-interest and sought the elimination of obstacles standing in the way of personal ambition and satisfaction. Without safeguards to protect against greed, large-scale production drowned small, local producers and entire families persuaded or forced to abandon rural towns and move to congested cities lost “not only ownership of tools, productive property, and control of conditions of labor, but also home ownership as well,” as land and home were discarded for unhealthy shacks near smoking factories. Families were also impacted by the absence of one or both parents, causing the loss of childhood experience and high rates of divorce. The farm commercialized in the desire to achieve exponential growth—a fact realized in our age of industrial farms, genetically-modified seed, and lab-created frankenfoods.

Finding common ground with the Distributists of England and the American Herbert Agar, publisher of Free America, the NCRLC found its ideological basis in Distributism. Under Ligutti, the Conference’s publication declared,

“We Catholic Agrarian Distributists have long been pointing to the evils that have caused this world-wide catastrophe—Industrialism, commercialism, urbanization, concentration of economic power.”

The Distributists and Msgr. Ligutti were aware of the labor market’s insecurities. As labor rose, the diversity of productive property shrank. Banishing the above mentioned evils by broader ownership and management of productive property was crucial to living in a nation of freedom or servility. Ligutti wrote, “A family should fully control the means of production, otherwise, self-preservation would be jeopardized, being dependent on factors external to it.” Thinking himself free because he eats, sleeps and shops, the worker “has no plot of land, no tools, no small enterprises,” and, thanks to “gigantic mergers and extreme concentration of ownership” institutionalized wage slavery increasingly depended upon welfare-based institutions. As the Distributists and NCRLC argued, restoring economic functions to the family eliminated the concentration and collectivism by corporations and states unconcerned with the quality and distribution of our food or the preservation of mass ownership. In truth, decentralizing economic power this way is a cheaper alternative to the high expense of doles or the corrupting power of largesse private enterprises.

“When a poor family becomes an owner of a cow, then communism goes out the back door.” – Msgr. Ligutti to Pope Pius XII

Following Roosevelt’s New Deal, loans became available for community projects that were highly publicized in the Catholic press. Recognizing an opportunity for resettlement, in 1933 Msgr. Ligutti secured a loan from the Subsistence Home Division to resettle 50 families on two to eight acre plots. These families worked the land part-time while holding down other employment in nearby mines. In just two years Granger families were off relief and government loan repayment was practically 100%, unheard of even by today’s standards.

Distributists saw how the aesthetic love of fertile land was lost to centralization and the doctrine of mass production. They viewed agrarian life as partial to virtuous living and frugality. It was vocational as the time spent working the land developed their affection and admiration for God’s creation, because, according to G.K. Chesterton, “nature is a sister, and even a younger sister: a little, dancing sister, to be laughed at as well as loved.” Fond of good stewardship, Distributists found joy in smallholdings and small communities: the picking of common fruits, making butter and cheese, brewing beer and sharing these gifts with neighbors. Like the Ligutti homesteads, Distributists also conjured a scheme to encourage the local production and consumption of agricultural produce and to bring families “back-to-the-land.” The prolific Dominican, Fr. Vincent McNabb, a supporter of the Catholic Land Movement sweeping Great Britain in the 1920s and 30s wrote, “On the land only can you get the three things that are the staples of all stable communities: poverty, chastity and obedience… that is the reason why, as long as I live, I shall be a staunch friend of the land movement.” The Catholic Land Association, a staple of Distributist enterprise, established training farms across Scotland and England, which also provided new farmers with subsistence farms they could own and manage.

Today, the Catholic Land Movement in the United Kingdom and Granger Homesteads are long gone, but the NCRLC and Distributism remain as vibrant as ever. If we can remember our common history perhaps tomorrow we can rebuild our alliance and resume the debate against the conditions that have stripped the rural family from their proper place in America. Together we may find ourselves with an opportunity for “putting first things first” and building an economy as if people—as if God mattered.

As originally appeared in Gilbert Magazine