Trending Now
You are at:Home»Featured»Muslim Persecution of Christians: November 2011
By Raymond Ibrahim on January 7, 2012 Featured, Those in Need 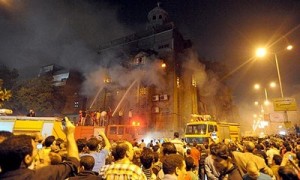 The so-called “Arab Spring” continues to transition into a “Christian Winter,” including in those nations undergoing democratic change, such as Egypt, where the Muslim Brotherhood and the Salafis dominated the elections—unsurprisingly so, considering the Obama administration has actually been training Islamists for elections.

Arab regimes not overthrown by the “Arab Spring” are under mounting international pressure; these include the secular Assad regime of Syria, where Christians, who comprise some 10% of the population, are fearful of the future, having seen the effects of democracy in neighboring nations such as Iraq, where, since the fall of the Saddam regime, Christians have been all but decimated.

Meanwhile, it was revealed that “Christians are being refused refugee status [in the U.S.]and face persecution and many times certain death for their religious beliefs under Sharia, while whole Muslim communities are entering the U.S. by the tens of thousands per month despite the fact that they face no religious persecution.”

Categorized by theme, November’s batch of Muslim persecution of Christians around the world includes (but is not limited to) the following accounts, listed according to theme and in alphabetical order by country, not necessarily severity.

Ethiopia: More than 500 Muslim students assisted by Muslim police burned down a church, while screaming “Allahu Akbar” (and thus clearly positing their attack in an Islamic framework); the church was built on land used by Christians for more than 60 years, but now a court has ruled that it was built “without a permit.”

Indonesia: Hundreds of “hard-line” Muslims rallied to decry the “arrogance” of a beleaguered church that, though kept shuttered by authorities, has been ordered open by the Supreme Court. Church members have been forced to hold services on the sidewalk, even as Indonesia’s leading Muslim clerics warned Christians that it would be “wise and sensible” for the church to yield to “the feelings of the local believers, specifically Muslims.”

Iran: The nation’s minister of intelligence said that house churches in his country are a threat to Iranian youth, and acknowledged a new series of efforts to fight the growth of the house church movement in Iran.

Nigeria: Islamic militants shouting “Allahu Akbar” carried out coordinated attacks on churches and police stations, including opening fire on a congregation of “mostly women and children,” killing dozens. The attacks occurred in a region where hundreds of people were earlier killed during violence that erupted after President Jonathan, a Christian, beat his closet Muslim rival in April elections.

Afghanis around the world are being threatened for leaving Islam and converting to Christianity. One exile, who changed his name after fleeing Afghanistan in 2007 when an Islamic court issued an arrest warrant for his conversion, is still receiving threats: “They [Afghan officials] were very angry and saying that they will hit me by knife and kill me.” Even in distant Norway last September, an Afghan convert to Christianity was scalded with boiling water and acid at a refugee processing center: “If you do not return to Islam, we will kill you,” his attackers told him.

Algeria: Five Christians were jailed for “worshiping in an unregistered location.” International Christian Concern (ICC), an advocacy group investigating the case, states that the five Christians are charged with “proselytizing,” “unauthorized worship,” and “insulting Islam.”

Iran: Pastor Yousef Nadarkhani, who caught the attention of the world after being imprisoned and awaiting execution for leaving Islam, remains behind bars as officials continue to come up with excuses to force him to renounce Christianity, the latest being that “everyone is [born]a Muslim.” A Christian couple “who had been snatched and illegally-detained” by authorities for eight months without any formal charges, were finally released, beaten again, and have since fled the country. While imprisoned, they were “ridiculed and debased” for their Christian faith.

Kashmir: Muslim police arrested and beat seven converts from Islam in an attempt to obtain a confession against the priest who baptized them. After the grand mufti alleged that Muslim youths were alternatively being “lured” and “forced” to convert by an Anglican priest “in exchange for money,” the priest was arrested in a “humiliating” manner. Recently released, his life is now “in serious danger.”

Kenya: A gang of Muslims stabbed and beat with iron rods a 25-year-old Somali refugee, breaking his teeth; he was then stripped naked, covered with dirt, and left unconscious near a church. Although he was raised Christian since age 7, he was attacked on the “assumption that as a Somali he was born into Islam and was therefore an apostate deserving of death.”

Nigeria: The Muslim militant group, Boko Haram, executed two children of an ex-terrorist and “murderer” because he converted to Christianity. When still a terrorist, he “was poised to slit the throat of a Christian victim” when “he was suddenly struck with the weight of the evil he was about to commit.” After finding he converted to Christianity, “Boko Haram members invaded his home, kidnapped his two children and informed him that they were going to execute them in retribution for his disloyalty to Islam. Clutching his phone, the man heard the sound of the guns that murdered his children.”

Egypt: After a Christian inadvertently killed a Muslim in a quarrel begun by the latter, thousands of Muslims rose in violence, “collectively punishing” the Copts of the village. Two Christians “not party to the altercation” were killed; others were stabbed and critically wounded. As usual, “after killing the Copts, Muslims went on a rampage, looting and burning Christian-owned homes and businesses.” Even so, “Muslims insist they have not yet avenged” the death of their co-religionist, and there are fears of “a wholesale massacre of Copts.” Many Christians have fled their homes or are in hiding.

Kenya: Suspected Islamic extremists, apparently angered at the use of wine during communion—Islam forbids alcohol—threw a grenade near a church compound killing two, including an 8-year-old girl, and critically wounding three others. The pastor of another congregation received a message threatening him either to flee the region “within 48 hours or you see bomb blast taking your life and we know your house, Christians will see war. Don’t take it so lightly. We are for your neck.”

Nigeria: In the latest round of violence, soon after mosque prayers were heard, hundreds of armed Muslims invaded Christian villages, “like a swarm of bees,” killing, looting, and destroying virtually everything in sight; at the end of their four-hour rampage, some 150 people had been killed—at least 130 of them Christians. Another 45 Christians were also killed by another set of “Allahu Akbar!” shouting Muslims who burned, looted, and killed. Hundreds of people are still missing; the attacks have included the bombing of at least ten church buildings. Nearly all the Christians in the area have fled the region.

Pakistan: A 25 year-old Christian was shot dead by “an unidentified gunman in what his family believes was a radical Muslim group’s targeting of a Christian.” According to the son, “We firmly believe that my father was killed because of his preaching of the Bible, because there is no other reason.” He began to receive threats “after voicing his desire to start a welfare organization for the poor Christians” of the region.

November’s major instances of dhimmitude come from two Muslim nations notorious for violating Christian rights—Egypt and Pakistan—neither of which is even cited in the U.S. State Department’s recent International Religious Freedom report:

Egypt: Following October’s Maspero massacre, when the military killed dozens of Christians, some run over intentionally by armored vehicles, Egypt’s military prosecutor detained 34 Christians, including teens under 16, on charges of “inciting violence, carrying arms and insulting the armed forces”; many of the detainees were not even at the scene and were just collected from the streets for “being a Christian.” Three are under 16 years of age, including one who, after having an operation to extract a bullet from his jaw, was chained to his hospital bed. Hundreds of Christians also came under attack from Muslims throwing stones and bottles, after the Christians protested against the violence at Maspero: “Supporters of an Islamist candidate for upcoming parliamentary election joined in the attack on the Copts.” Meanwhile, a senior leader of the Salafi party, which came in second after the Muslim Brotherhood in recent elections, blamed Christians for their own massacre, calling “Allah’s curse on them.” Muslim Brotherhood leaders asserted that only “drunks, druggies, and adulterers” are against the implementation of Sharia—a clear reference to Egypt’s Christians.

Pakistan: A new U.S. government commission report indicates that Pakistani school textbooks foster intolerance of Christians, Hindus, and all non-Muslims, while most teachers view religious minorities as “enemies of Islam.” “Religious minorities are often portrayed as inferior or second-class citizens who have been granted limited rights and privileges by generous Pakistani Muslims, for which they should be grateful,” notes the report. Accordingly, in an attempted land-grab, Muslim police and cohorts of a retired military official, beat two Christian women with “batons and punches,” inflicting a serious wound to one of the women’s eyes after the women spoke up in defense of their land, and shot at Christians who came to help the women. “In the last few years Muslims have made several attempts to seize the land from the Christians, usually succeeding because Christians are a marginalized minority.” Likewise, under a “false charge of theft,” a Christian couple was arrested and severely beaten by police; the pregnant wife was “kicked and punched” even as her interrogators threatened “to kill her unborn fetus.” A policeman offered to remove the theft charges if the husband would only “renounce Christianity and convert to Islam.”