Trending Now
You are at:Home»Featured»Muslim Persecution of Christians: September, 2011
By Raymond Ibrahim on October 17, 2011 Featured, Those in Need 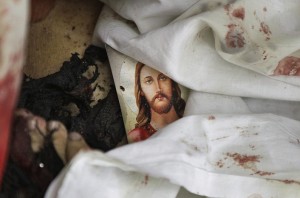 An especially busy month in the persecution of Christians in the Muslim world, September also witnessed Secretary of State Hillary Clinton release the Annual Report on International Religious Freedom. Ironically, aside from Iran and Sudan, none of the countries that habitually appear in this series were designated as “countries of particular concern,” defined by the State Department as countries that are “engaged in or tolerated particularly severe violations of religious freedom.”

Egypt, for instance—which this year alone has seen nearly 80 Christians killed, their many churches burned or bombed, and their daughters kidnapped and forcibly converted—was not listed as a “country of particular concern,” this despite the fact that the U.S. Commission for International Religious Freedom, an independent, bipartisan federal government commission, had recommended that the State Department designate it so.

Neither was Pakistan cited as a “country of particular concern.” According to CNS news, “Clinton did not designate Pakistan even though the State Department’s own report stated that Pakistani law calls for the death penalty for people who commit ‘blasphemy’ against Islam or who convert from Islam to another religion—and even though the report listed multiple instances of the Pakistani government using the law to persecute Christians.”

In fact, September alone saw the following in Pakistan:

Categorized by theme, the rest of September’s batch of Muslim persecution of Christians around the world includes (but is hardly limited to) the following accounts, listed according to theme and in alphabetical order by country, not necessarily severity.

Egypt: Muslims threatened Christians near Aswan for fixing a dilapidated church, even though it was authorized, demanding that the church not have a cross, dome, bells, or even be called a “church”; weeks later, after Friday prayers, thousands of Muslims attacked the church, burning it to the ground, and demolishing its domes, even as Egyptian security watched. (Copts protesting this church attack led to the recent military massacre.)

Indonesia: A Muslim suicide bomber attacked a packed church killing himself and wounding at least 27 worshippers, some critically; security received advance warning but, as often happens in Muslim majority countries, left their post at the time of the attack.

Indonesia: Under accusations of encouraging Muslims to apostatize to Christianity, an American family (husband and wife, two sons) were attacked by a Muslim throng that set fire to their property and vehicle. “Only the intervention of police saved the[ir]lives” from “an enraged mob spurred by a local religious leader.”

Iran: A Christian pastor remains incarcerated awaiting execution for refusing to recant Christianity; the government of Iran, under international criticism, now claims that he is getting the death penalty, not because of religion, but because he is a “Zionist,” a “rapist,” and other new charges, even though its own court documents clearly assert his crime is apostasy.

Somalia: A Muslim convert to Christianity was abducted and decapitated, his body dumped in the road, by Muslims from al-Shabaab, “a militant group with ties to al Qaeda” that has “vowed to rid Somalia of Christianity.” According to a leader of the underground church: “It is usual for the al-Shabaab to decapitate those they suspect to have embraced the Christian faith, or sympathizers of western ideals.”

Sudan: 129 people in southern Sudan were arrested and charged with apostasy, which “carries a maximum sentence of death.” The plaintiff maintains that while the defendants may be familiar with the Quran, they are not upholding the “Sunna of Muhammad”: “Given the track record of the Government of Sudan, it is possible that Article 126 [which criminalizes apostates]is being used to suppress ethnic minorities and those who the state perceives as potential sources of opposition.”

Egypt: A 14-year-old Christian girl was prevented from entering school because she refused to wear a veil: “The school management described her as ‘flaunt’ for not covering her hair”…. Coptic students were forced to obey for fear of the school management’s threats” except the girl and her parents, who “refused this decision because it is inconsistent with religious freedom and a blatant Islamization of education.”

Iraq: Three Christians were kidnapped; according to police sources, “Gunmen in a modern vehicle blocked the Christians’ way, set their white Landrover [car]on fire, killed their hunting dogs and led them to an unknown destination.” This abduction comes “after several other anti-Christian attacks in recent weeks, including a car bomb that exploded in August near a church in central Kirkuk…”

Iran: Along with the aforementioned Christian pastor awaiting execution, five Christians, including a “heavily pregnant woman,” were ordered to “report to prison immediately to serve a one year prison sentence,” being convicted of “crimes against the Islamic Order.” Also, an adopted child was confiscated from its Christian parents, as a way to pressure them to testify against fellow Christians: “If you want your child back, you must file a complaint against your fellow Christians in prison.”

Kazakhstan: “Lawmakers in Kazakhstan have voted for ‘controversial legislation‘ that Christians and rights activists say will further limit religious freedom in the mainly Muslim Central Asian state.” Among other things, the new law “makes[s]it more difficult for churches to worship freely” and bans “house churches.”

Philippines: In Mindanao, “the Christian minority is suffering harassment and pressure from the Muslim population. Government officials are forcing Christians to sell their land to make room for Chinese industries. According to sources, the climate of impunity, the abductions, the continuing clashes between the army and extremist Islamic groups and the economic crisis have created an unbearable atmosphere for the Christian population, who are afraid to express their faith in public.”

Sudan: A Catholic priest was beaten for allegedly “preaching against Islamic government and opposing its teaching and rules.” Likewise, Muslims sent text messages to at least 10 church leaders in Khartoum saying they are planning to target Christian leaders, buildings, and institutions: “We want this country to be purely an Islamic state, so we must kill the infidels and destroy their churches all over Sudan,” said one recent text message circulating in Khartoum.

Incitement against and Killings of Christians

Egypt: In a circulated video, the grand mufti of Al Azhar, Ali Goma’a, referred to Christians as “infidels”; Wagdi Ghoneim, a popular cleric and former U.S. imam, called Copts “Crusaders” on Al Jazeera, insisting that they do not deserve equal rights with Muslims in Egypt; Abu Shadi, a representative of the Salafis, told Tahrir News that the Copts must either convert to Islam, pay jizya and assume inferior status, or die.

Nigeria: Over 100 Christians have been killed by Muslim militants, many hacked to death, and aided by the military; “among them was a pregnant woman who died with a child in her womb.” Similarly, Muslim militants “went to shops owned by Christians at a market at about 8 p.m., ordering them to recite verses from the Quran.” If they were unable to recite, the gunmen shot and killed them.

Syria: An anti-Assad Muslim preacher urged Muslims through sermons televised in Syria to “tear apart, chop up and feed” the meat of Christians and others who support the regime “to the dogs.”

Accordingly, whatever the anecdote of persecution, it typically fits under a specific theme, including hatred for churches and other Christian symbols; sexual abuse of Christian women; forced conversions to Islam; apostasy and blasphemy laws; theft and plunder in lieu of jizya; overall expectations for Christians to behave like cowed dhimmis (second-class citizens); and simple violence and murder. Oftentimes it is a combination thereof.

Because these accounts of persecution span different ethnicities, languages, and locales—from Morocco in the west, to India in the east, and even throughout the West, wherever there are Muslims—it should be clear that one thing alone binds them: Islam—whether the strict application of Sharia, or the supremacist culture born of it.