Trending Now
You are at:Home»Featured»Muslim Woman Seeks to Revive Institution of Sex-Slavery
By Raymond Ibrahim on June 8, 2011 Featured, Law & Justice

Last week witnessed popular Muslim preacher Abu Ishaq al-Huwaini boast about how Islam allows Muslims to buy and sell conquered infidel women, so that “When I want a sex-slave, I go to the market and pick whichever female I desire and buy her.”

This week’s depraved anachronism comes from a Muslim woman—Salwa al-Mutairi, a political activist and former parliamentary candidate for Kuwait’s government, no less: She, too, seeks to “revive the institution of sex-slavery.”

A brief English report appeared over the weekend in the Kuwait Times (nothing, of course, in the MSM):

Muslim men who fear being seduced or tempted into immoral behavior by the beauty of their female servants, or even of those servants “casting spells” on them, would be better to purchase women from an “enslaved maid” agency for sexual purposes. She [Mutairi] suggested that special offices could be set up to provide concubines in the same way as domestic staff recruitment agencies currently provide housemaids. “We want our youth to be protected from adultery,” said al-Mutairi, suggesting that these maids could be brought as prisoners of war in war-stricken nations like Chechnya to be sold on later to devout merchants. 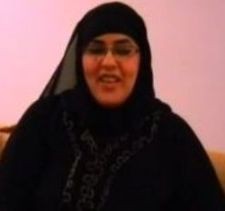 Mutairi: "In the Chechnyan war, surely there are female Russian captives. So go and buy those and sell them here in Kuwait; better that than have our men engage in forbidden sexual relations."

The Arabic news website, Al Arabiya, has the sordid details, including a video of Mutairi addressing this topic. I summarize and translate various excerpts below (note: I am not making any of this up):

The Kuwaiti female activist begins by insisting that “it’s of course true” that “the prophet of Islam legitimized sex-slavery.” She recounts how when she was in Mecca, Islam’s holiest city, she asked various sheikhs and muftis (learned, authoritative Muslims) about the legality of sex-slavery according to Sharia: they all confirmed it to be perfectly legal; Kuwaiti ulema further pointed out that extra “virile” men—Western synonyms include “sex-crazed,” “lecherous,” “perverted”—would do well to purchase sex-slaves to sate their appetites without sinning.

Here’s a particularly interesting excerpt from her taped speech on the rules governing sex-slaves:

A Muslim state must [first]attack a Christian state—sorry, I mean any non-Muslim state—and they [the women, the future sex-slaves]must be captives of the raid. Is this forbidden? Not at all; according to Islam, sex slaves are not at all forbidden. Quite the contrary, the rules regulating sex-slaves differ from those for free women [i.e., Muslim women]: the latter’s body must be covered entirely, except for her face and hands, whereas the sex-slave is kept naked from the bellybutton on up—she is different from the free woman; the free woman has to be married properly to her husband, but the sex-slave—he just buys her and that’s that.

She went on to offer concrete suggestions: “For example, in the Chechnyan war, surely there are female Russian captives. So go and buy those and sell them here in Kuwait; better that than have our men engage in forbidden sexual relations. I don’t see any problem in this, no problem at all.”

Mutairi suggests the enslaved girls be at least 15 years-old.

She further justified the institution of sex-slavery by evoking 8th century caliph, Harun Rashid—a name some may recall from Arabian Nights bedtime stories; a name some may be surprised to discover politically active Muslims modeling their lives after:

And the greatest example we have is Harun al-Rashid: when he died, he had 2,000 sex slaves—so it’s okay, nothing wrong with it.

Mutairi’s rationale is ultimately guided by a sense of efficiency, a desire for the good of society: legalizing sex-slaves helps prevent Muslim men from transgressing Allah’s laws (as we have seen, extramarital relations with fellow Muslim women is strictly forbidden, but not with infidel sex-slaves, since they are scarcely considered human). Thus, the institution of sex-slavery provides a convenient, Sharia-compliant way of satiating the libidinous urges of Muslim men.

Mutairi concluded by piously supplicating Allah: “Oh I truly wish this for Kuwait, Allah willing—Oh Lord, Lord, you are bountiful…”

While she waits, Mutairi can take solace in the fact that, if sex-slavery is not institutionalized in Kuwait, it thrives underground throughout the Muslim world, where non-Muslim girls—mostly Christians—are routinely abducted, enslaved, and forced into lives of unspeakable degradation.

After all, just because a practice is not formally institutionalized does not mean that those who deem it their divine right are not practicing it.