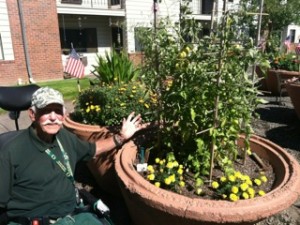 Richard Armstrong showing off his garden (2011).

My Dad, bless his heart (which nearly killed him more than once), has been dying since 1980.  Thirty-two years ago, I was a Peace Corps volunteer in the Marshall Islands when a telegram arrived for me in Majuro, and informed me to fly to Eugene, Oregon on the next available flight.  My father had a “massive heart attack” and was “not expected to live.”   There were no telephones, social media or other ways to get an update as I flew 9,000 miles across the Pacific Ocean over the next 22 hours.  I prayed for the strength of what lay ahead.

The first words out of my Dad’s mouth when I saw him hooked up to his hospital bed, two days after the telegram, as I embraced him, was “I am sorry for not being a good Father to you.”  That was a shock because I always thought he and Mom did a pretty good job of raising us.  It seemed that Dad felt a need to say that to make peace.  I was just glad to see him alive again.

My Dad did not die that day, but he never worked for wages again.  My Mom and he believed that Dad would be lucky to live another five to ten years given the damage done to his heart.  His Dad, my grandfather, had died at the age of fifty-two from a massive heart attack.  Two years ago my brother Scott Armstrong  died from a massive heart attack also at the age of fifty-two.  Dad somehow survived the curse of being fifty-two in our family.  He came through with only one-third of his heart intact, and a gradual decline in health from that day forward until today.

Thirty-two-years since that massive heart attack, Dad has suffered several more heart attacks, two open heart surgeries, diabetes, continued vascular and cardiac degeneration, several types of cancer, has used a urine bag for at least eight years and has lost a little toe from a large open wound on his foot that has not healed for over three years.  He also has slowly lost the ability to transfer himself from his bed to his wheelchair.  He suffers from dementia and recently has more episodes of confusion and misplaced anger, even with family members.

Last month, we moved my Dad to be closer to our Bismarck family from his care facility in Forest Grove, Oregon.  Last week, with a high fever and some delirium present, he was rushed to the emergency room.  He had a raging urinary tract infection that threatened to kill him.  He is now scheduled for vascular surgery to improve blood flow to his infected foot.  The surgery for an eighty-three-year-old man with his history is risky.  Doing nothing is risky as well.  After all these years, I am always prepared to say goodbye to Dad, will miss him when he is gone and yet, am comforted that we will see each other again in eternity.

For the last several months I have been attending talks about the major bioethical issues of our time at the University of Mary.  Coincidentally the most recent talk last weekend was on the very end of life issues facing my Dad and our family.

My Dad is in massive amounts of pain from the infection that sent him to the ER, coupled with a pink-eye infection.  He also suffers from pain from the pieces of old shrapnel that are still embedded in his arm from a grenade blast that left him disabled 60 years ago in North Korea. Father Tad addressed some of the issues encountered in the delivery of palliative care of patients like my Dad.

“The truth is that all life, from conception to natural death, is a gift from God,” said Father Tad.  Even when we suffer and suffer for long periods of time, “[w]e have a duty to preserve our life and to use it for the glory of God, but the duty to preserve life is not absolute, for we may reject life-prolonging procedures that are insufficiently beneficial or excessively burdensome.”

The Church teaches that we have a moral obligation to use ordinary or proportionate means of preserving life even for those who suffer.  Each life, so precious, even in the state my Dad is in, requires great care to ensure that all that can reasonably be done is being done, and similarly, that heroics can be declined.  It is complicated and unique to each individual’s life and path to death.  Circumstances and details will be critically important to discerning one’s moral duty. As some ethicists have noted, “When you have analyzed one end of life case, you have analyzed one end of life case.”

Father Tad encouraged those who see loved ones suffering to understand the nature of redemptive suffering.  In his Apostolic letter in 1984 entitled Salvifici Doloris, Blessed John Paul II wrote about the salvation promised through suffering: “Love is also the fullest source of the answer to the question of the meaning of suffering. This answer has been given by God to man in the cross of Jesus Christ.”

Father Tad stressed how Jesus redeemed the world when he was utterly immobile and weak, incapable of moving so much as a limb while he hung on the cross. The only movement he could make was the inward movement of his will, that precious and invaluable movement of accepting and embracing the particular death he faced, offering everything up in trust. When we are nailed to our hospital beds and we can do nothing physically, we need to turn spiritually to that same inner reality.

Christ went toward His own suffering, aware of its saving power.  Our suffering allows us to experience what God experienced for us. When we align our suffering with the Lord, we become sharers in the redemptive suffering and work of Christ. Pope John Paul II notes how the discovery of the salvific meaning of suffering in union with Christ radically transforms our sense of its uselessness.

In a sense, since we are the body of Christ, when one member suffers, we all suffer.  We can all offer back to our Creator that gift that was freely given to all of us. When we offer back prayers and seek to do God’s will we act in the manner that has been willed through the Father.  Grace then works on both the dying and those who seek to understand the unknown journey ahead.

Praying has purpose and richer awards are promised to those pray faithfully even when it seems to produce no outward physical results.  Our interior selves, indeed our souls, grow stronger and bear rich fruit in eternity.

The elements of a good death for my Dad are here again, just as they were thirty-two years after that plane ride across the Pacific.  Dad and I are spending more time together than we ever have before in prayer and in silence sometimes, and yet together. Some of his grandkids can see him as well now.  He receives the Eucharist daily; he has received the Anointing of the Sick and is provided with reasonable pain management.  We pray that he will be in union with Christ in his final hour, after thirty-two years we still know, “Thy will be done.”  In other words, God will be done with you on this earth in His own time. Amen.