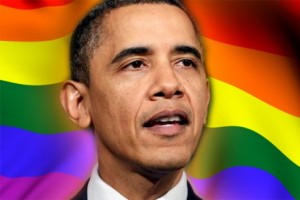 I came home the other day to hear the news from my children: the President of the United States had sent a letter to a “gay” couple in Brooklyn on the occasion of their recent “nuptials.”

This forced a conversation that I would rather have postponed – my youngest child being eight years old – a conversation that was foisted upon our family due to an (apparent) calculated decision by the President to shore up his standing with an ideological constituency. And, indeed, designed (perhaps) to further mainstream acceptance of homosexual relations by bringing such conversations into the living room.

It brought home what parents raising children in the 1990s had to contend with in wake of the Monica Lewinski-Bill Clinton scandal: the further shattering of childhood innocence. For me, this congratulatory proclamation on White House stationery went beyond provoking moral outrage in the abstract, for it had reached into my own family and subverted my and my wife’s joint role as the primary educators of our children.

There is a distinction also to be made between Clinton’s actions in the Lewinsky scandal and Obama’s recent missive, and a degree of moral culpability vis-à-vis forcing the premature coming of age of the young. Obama is consciously using the moral force of his office to advance a morally-destructive agenda. Bill Clinton, on the other hand, had no desire that “getting a Lewinski” – the primetime television series Law and Order’s contribution to the decline of norms of decency – would enter into the national vocabulary. Indeed, he desperately wanted to hide his peccadillos from public scrutiny, preferring that the facts about his behavior remained in the shadows.

Indeed, such a desire to avoid scrutiny drove him to declare infamously at a press conference that “I did not have sexual relations with that woman, Miss Lewinsky.”

This emblematic 1990s sound bite – think back to the halcyon days of Nirvana – provoked a charge of perjury and general condemnation by culturally conservative pundits accusing President Clinton of lying.

Which was a shame, because Bill Clinton did not lie.

To wit: Though perhaps motivated by lawyerly equivocation over the definition of certain words, he spoke a far larger truth than he himself perhaps realized when he uttered his finger-wagging denial, one very much germane to the current debate about same sex “marriage:” Acts of sodomy are simply not sex.

In this day and age, people tend to sanitize discussion about sodomy, but whether per os or per anum, the acts are unnatural and can never be sexual in the true sense, as they can never be generative or procreative. Nor are they truly uniative, as the necessary biological complementariness – the key fitting the lock – is lacking. “Progressive” figures such as President Obama who laud unions based on acts of sodomy preach an unscientific anthropology not quite on literary par with Aristophanes’ wine-besotted musings in the Symposium, though one equally at war with the testimony offered by biology and nature’s design.

What is the purpose of “marriage” and the state’s interest in the marital union, a subject on which the current President’s views are “evolving,” though in a rather retrograde direction? If you think about it, marriage cannot simply be just about fulfilling the mutual desires of two individuals, even where those individuals be of the opposite sex. For marriage to be marriage, the desire for union must be linked to the procreative, and the raising and moral cultivation of the next generation. As the novelist Hervey Allen once wrote, “Each new generation is a fresh invasion of savages,” and, as such, offspring must be tamed. The family – headed by a biological mother and a biological father, committed to each other over the long haul “in sickness and in health” – gives the little urchins their best shot at being well-integrated into society and to flourish as individuals, as social science data attests.

The State, for its part, has no legitimate interest whatsoever in licensing same-sex relationships, be they based on friendship or misdirected eros. The State’s interest in marriage originates in a simple biological fact: when men and women congress, children inevitably result. The State thus has an interest in regulating and promoting stable unions among men and women – and for that matter, discouraging unstable ones – such as by privileging marital unions through the tax code and the allocation of benefits, as it is parents who uniquely provide for the common good by ensuring the continued existence of civilization into the future.

(Objections based on sterility of certain heterosexual couples are addressed here.)

All this once was commonly understood across the culture at large and its institutions. As the United States Supreme Court once posited, “Marriage and procreation are fundamental to the very existence and survival of the race.” Civilizations that lose sight of this fundamental, biological fact do so at their own peril – they wither and are supplanted.

The Latex Left’s blind faith in the myth of inevitable “Progress” – a dialectical process whereby those “oppressed” by hierarchy advance step-by-step towards a state of liberated nirvana – is the stuff of fantasy. One need look only across the Atlantic to see where such misguided beliefs lead: to civilizational autodestruction. Unless demographic trends are drastically reversed, within our children’s lifetimes, Europe as we know it will cease to exist.

Having embraced an anti-culture of sterility – contraception, abortion, sodomy – Europe has chosen oblivion and is tumbling off a demographic cliff. What will supplant it – an ascendant Islamic subculture, perhaps – and whether the United States will follow suit, remains to be seen…