Trending Now
You are at:Home»Featured»My Little One, Am I Not Your Mother?
By Rachana Chhin on December 12, 2013 Featured, History 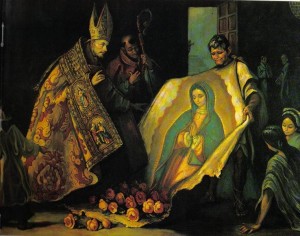 Today the Church celebrates the Feast Day of Our Lady of Guadalupe, a great appearance of the Blessed Virgin Mary to St. Juan Diego, which forever changed the course of history in the Americas. Her appearance on Tepeyac Hill, Mexico in 1531 helped convert millions and millions of people in the New World — Native Americans, meztizos, and European settlers — and encouraged unity in what was a relationship marked by warfare, suspicion, and antagonism.

Nestled in the Aztec story entitled the Nican Mopohua (Nahuatl: ”Here is Told”), the story begins with a humble Indian convert making his way to Mass. Here is the translation Carl Anderson used in his book, “Our Lady of Guadalupe: Mother of the Civilization of Love“:

“It was Saturday, not yet dawn, when he was coming in pursuit of God and His commandements. And as he drew near the little hill called Tepeyac, it was beginning to dawn. There he heard singing on the little hill, like the song of many precious birds. When their voices would stop, it was as if the hill were answering them. Extremely soft and delightful, their songs exceeded those of the coyoltototl and the tzinitcan and other precious songbirds.

…And when he reached the top of where she was, he was filled with admiration for the way her perfect grandeur exceeded all imagination: her clothing was shining like the sun, as if it were sending out waves of light. And the stones, the crag on which she stood, seemed to be giving out rays like precious jades, like jewels the stones gleamed. The earth seemed to shine with the brilliance of a rainbow in the mist. And the mesquites, prickly pear, and the other little plants that are generally up there seemed like quetzal feathers. Their foliage looked like turqoise. And their trunks, their thorns, their prickles, were shining like gold.”

Notice the flowers blooming and the birds singing in the account, how the cacti and the wild animals are glistening and “shining like gold”. The land, marred by war and conquest, itself seems to speak of a rebirth. The stars on her tilma that St. Juan Diego sees reflect the celestial nature of this apparition. All of these signs speak to the wonderful things that are about to arise in the new world: An entirely new civilization. A new people to come.

Later, St. Juan Diego would bring this message to his bishop and his tilma, filled miraculously with roses, soon convinced the bishop to build a shrine in honor of Our Lady. In the succeeding years, millions of people would be baptized in the New World and come to the faith. If you live in the Americas, you are the fruit and sign of the veracity of this healing and unifying message. In sending his Message to the Americas yesterday, Pope Francis reiterated the importance of Our Lady of Guadalupe to us:

“Mary’s embrace of all the peoples of the vast expanses of America – the peoples who already lived there, and those who were yet to come [….] showed what America – North and South – is called to be: a land where different peoples come together; a land prepared to accept human life at every stage, from the mother’s womb to old age; a land which welcomes immigrants, and the poor and the marginalized, in every age. A land of generosity.”

It must be pointed out also that the Church is not oblivious or ignorant of the painful history during this period between the Church and the New World. After all, Archbishop Charles Chaput — a member of the Powatomi Indian tribe — in his recent address to the bishops from Canada, the United States and Latin America, said as much: “More than 500 years ago, men came from the Old World of Europe to the New World of America. They brought with them their pride and avarice, their illnesses and sins. But they also brought a treasure beyond price — the Word of God, the Gospel of Jesus Christ.” This is why must remember this story and celebrate this feast in light of the latter, not the former.

Our Lady of Guadalupe came to St. Juan Diego and had a message for him to bring to the peoples of the New World. She, crushing the serpent’s head and standing in front of the sun, was stronger than the gods of the Aztecs that demanded human sacrifice (Genesis 3:15, Revelation 12:1). She also was stronger than the pride and arms of the Spaniards who sought to take the New World by force. She would win over the peoples for her Son with the love and tenderness of a mother.  She embraced all peoples underneath the “hollow of her mantle”, in the “crossing of her arms,” regardless of whether one was Indian or Spaniard, African or Mestizo.

It is notable, then, that in the first Mass reading for this feast day, we read the ancient words of the day when God’s covenant will not only be kept for the Jewish people but for all people, for all tribes of the earth. What joy this is for us!

“Sing and rejoice, O daughter Zion!
See, I am coming to dwell among you, says the LORD.
Many nations shall join themselves to the LORD on that day,
and they shall be his people,
and he will dwell among you,
and you shall know that the LORD of hosts has sent me to you.” (Zechariah 2: 14-15)

For them then, for us now, we are Catholic. Our faith is what binds us and holds us together regardless of which tribe, tongue, or people we come from. We have the same Father. We have the same Lord. The Church is Our Mother and Guadalupe came to us — to give us her Son. She is our Mother. She came to the hills of Tepeyac to give her gift to the New World and to reteach the Old World the timeless message of the Gospel of her Son. “Behold, your mother!” (John 19:27). This is the eternal Advent message and 500 years later, many pilgrims still visit Guadalupe’s shrine in Mexico City, built on the ancient ruins of the Aztec capital, Tenochtitlan.

“Then and there his [St. Juan Diego’s] tilma [cloak]became the sign, there suddenly appeared the Beloved Image of the Perfect Virgin Saint Mary, Mother of God, in the form and figure in which it is now, where it is preserved in her beloved little house, in her sacred little house in Tepeyac, which is called Guadalupe.”

Truly, she is our Mother. Our Lady of Guadalupe, Mother of the Civilization of Love and Patroness of the Americas, pray for us!