Trending Now
You are at:Home»Columnists»Naming the Gosnell Babies
By Fr. Frank Pavone on May 10, 2013 Columnists, Contraception & Abortion, Featured 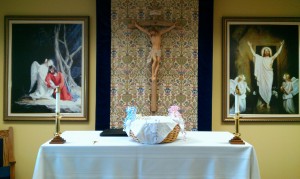 The trial of abortionist Kermit Gosnell is about much more than the man himself. In a painful way, it brings America face to face with abortion, which, as the defense argued, is “bloody” and “real.”

For those who have had abortions, it brings them again in touch with a pain that is never really far away, and it brings them in touch yet again with their need for healing. This is especially true when we see what the Gosnell case has confronted us with: bodies of babies in bags and cartons in the freezer, severed feet in jars, some 45 babies retrieved in a raid on the clinic and entrusted to the Philadelphia Medical Examiner.

As Pastoral Director of the world’s largest ministry for healing after abortion, Rachel’s Vineyard, as well as of the largest mobilization of those who speak out about their abortions, the Silent No More Awareness Campaign, I have accompanied countless mothers and fathers on their journeys of healing. And I have presided over the burials of many aborted babies.

One of the key moments of that journey of healing after abortion is when the parents name their child. The moment is powerful and freeing. Up until then, the child was a victim of de-humanization. Before we can kill, we have to dehumanize. “This is not a child,” we lie to ourselves; or we say, “This is not a child for whom I am responsible right now.” In these or a thousand other ways, a veil of dehumanization covers the child; a chasm is introduced between that child’s humanity and our awareness of our need to respond to it with an unconditional acknowledgement and acceptance. But the time is not right, the burden too great, and so we keep any semblance of the child’s humanity as far away from our consciousness as we can.

And that is where the power of the name comes in.

In the case of Dr. Gosnell, we have heard of the 45 babies retrieved from the clinic. And we have read the Grand Jury Report and heard the witnesses speak of “Baby Boy A,” “Baby Boy B,” Baby C, D, E, F and G.

But now it’s time, in our collective journey through this nightmare, to connect with these children more directly. It’s time to name the children. We have no evidence that anyone else has given them a name or was interested in giving them a name. In fact, these babies were brought to an abortion facility to be killed and then thrown away. The fact that their parents abandoned them does not give us permission to do so. “Though father and mother forsake me, the Lord will receive me,” Scripture tells us (Psalm 27:10). “I have called you by name, you are mine,” the Lord says (Isaiah 43:1). As Pope John Paul II wrote, “God … has entrusted the life of every individual to his or her fellow human beings, brothers and sisters” (Evangelium Vitae, 76). From the point of view, then, that we are one human family called into being by God, these children are also ours. And that’s why we can name them when nobody else has.

This is what Priests for Life has done. On Ascension Thursday, May 9, 2013, a simple ceremony was held in the chapel at the headquarters of Priests for Life in Staten Island, NY. We heard the Word of God, prayed for these babies, their families, and those who participated in their deaths. And we then named them. I chose the name “Adam” for “Baby Boy A,” simply as a reminder that Adam, the first man ever created, reminds us that in each man — and in each child — all humanity is somehow represented, and that our response to that one person, whether acceptance or rejection, shapes our response to every person. I named “Baby Boy B” Michael, to remind us of the struggle between good and evil that rages in our culture and in our own mind and heart as we choose how we will respond to each person.

Most of the other names are gender-neutral, since we do not have information on the genders of most of the babies.

Moreover, the naming ceremony took place on this Feast of the Ascension, for on that day, the humanity that the Lord Jesus took to the heights of heaven is the same human nature shared by all of us — rich and poor, healthy and sick, born and unborn — and by all these babies. We remembered all the babies killed by Dr. Gosnell, well beyond those found in his clinic, as well as the over 50 million children killed across America since Roe vs. Wade declared they were not persons.

The names we gave to the 45 babies follow. We invite you to pray for them and their families, and for Dr. Gosnell and his staff. We look forward, once receiving permission of the Medical Examiner, to give these children a proper funeral and burial.

Names of the Gosnell Babies

From the Grand Jury Report: “The Philadelphia medical examiner analyzed the remains of 45 fetuses seized from the clinic. Of these, 16 were first-trimester; 25 were second-trimester, ranging from 12 to 21 weeks; 2 were 22 weeks; 1 was 26 weeks; and 1 was 28 weeks.”

Baby Adam (Baby Boy A, aborted at seven and a half months, six pounds weight)

Baby Chris (Baby D — Was delivered into the toilet and was seen swimming there.)

Baby Andy (Baby E — This baby was heard to whine.)

Baby Lou (Baby F — This baby’s leg jerked and moved after being delivered.)

Fr. Frank’s Homily given at the naming service of the Gosnell Babies (May 9, 2013)