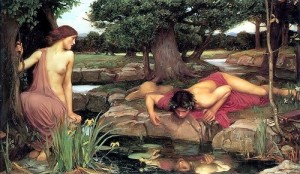 The myth of Narcissus is very suggestive for our day. There are many variations to the story, but they all end the same way. Narcissus is cursed to forever experience the pain of unrequited love. That happens to be our own curse, too. But first, here’s how it happened to Narcissus.

Narcissus was a handsome and vain boy who constantly spurned the love of the nymphs. After getting sick of hearing the laments and prayers of the jilted nymphs, the Goddess finally decided to punish Narcissus. So one day, as Narcissus leaned over a pool of still water to take a drink, he saw the image of himself reflected in the water. Because of the curse, he was made to fall in love with his reflection.

Whenever Narcissus tried to reach out and embrace the vision in the water, it would ripple and disappear as his arms disturbed the pool. Narcissus pleaded with the image in the water to at least stay and let him look on what he loved. And so Narcissus, mesmerized by his own reflection, languished at the pool until he died.

The Curse Lives On

Like many today, Narcissus was entranced by an image. An image of love that was only an illusion. He thought he loved a person, but it was only himself. He desires mutuality and reciprocity, but he is all alone. His love never transcends his own ego, it never reaches real communion with another person. Contraception functions much like that alluring pool.

For it does much more than prevent conception on a biological level. Contraception creates a separation from reality that results in several illusions. It is a barrier to reality because it forces us to lie about sexuality. If we treat sex like it’s essentially unrelated to procreation, then we will believe that sex is essentially unrelated to children, family, and society. That is, we lose sight of the real social nature of sexual love, just as Narcissus was isolated from any real social dimension in his love of a phantom.

We thought that contraception would give us the unity we seek without the hassle of social consequences. But contraception is also a barrier that prevents two persons from attaining real unity, even in sex. When spousal love seeks to express sexually that indissoluble bond of a man and woman, contraception again becomes like that pool. The man and the woman look at each other, but they only see themselves. They may be united physically, but spiritually they are alone. Their bodies do not express what their souls desire; they are not ‘one flesh’. How does that happen?

No Unity Without God

The unity of love that spouses seek cannot be located merely in the body. The unity of love isn’t achieved by simply ensuring that the right parts go in the right places. That’s a necessary, but not a sufficient condition. Love must be intended, and that intention needs a truth that transcends the two and can bring them together in a way that is “not of the will of the flesh, nor of the will of man, but of God”. Now it is God’s intention that sex should have the ‘logos’ of being a procreative kind of thing, and so be a most profound and divine form of unity for a husband and wife.

They can’t intend both sexual unity and contraception simultaneously anymore than Judas could both intend to betray Jesus with thirty pieces of silver and intend his kiss in the garden to symbolize friendship. They are incompatible intentions. In both cases, there’s simply a betrayal of love.

Trapped in the Prison of Self

Also, we shouldn’t overlook the homosexual connotations of Narcissus’ curse. This too overlaps with contraception. Since to use contraception is to deliberately intend a sexual act that is unrelated to procreation, this puts it on common ground with homosexual acts. It’s no accident that after our culture embraced contraception; we followed it up with acceptance of homosexual marriage. Dissident Catholics have admitted that heterosexual contraceptive acts are equal to homosexual acts. But there’s no unity, sexual or otherwise, in these kinds of sexual behavior. Our culture is just staring into Narcissus’ pool.

And we’re languishing unto death because of it.

Brian Killian is a writer, thinker, husband, and father. He studied undergraduate philosophy at a Benedictine university and some graduate philosophy at a Basilian university. He is a perpetual student of rhetoric, new media, the intersection of marketing and evangelisation, and the adventure of life in faith. Since becoming unemployed during the dot-com crash of 2000, he has lived in Canada with his family. He has been a columnist for a small Catholic newspaper in Atlantic Canada, a contributor to several online Catholic portals, and a professional freelance copywriter.