Trending Now
You are at:Home»Featured»Natural “Spark” to Treat ADD and Other Conditions
By Karen Lynn Ford on January 4, 2013 Featured, Health & Fitness, On Books 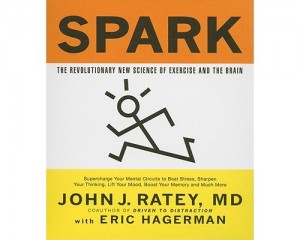 Last night I finished reading Spark: The Revolutionary New Science of Exercise and the Brain by John J. Ratey, M.D (2008).  My family physician recommended the book at my annual checkup last month.  I told my doctor of my various discomforts and moodiness—I’m pretty healthy, but hadn’t been feeling 100%.  He didn’t offer pills or suggest a battery of tests.  He simply asked, “Do you exercise regularly?” I hung my head a bit and answered, “Well, I did.”

Notably, my checkup was about a month or so after I ran a half-marathon with my daughter, then abruptly stopped running or exercising.  I was full of excuses—It’s too dark when I want to run…My running shoes don’t feel right…I have too many papers to grade.  Along with the excuses came distractedness, crankiness, and an achy body.  In spite of my overall commitment to healthy living “through diet and exercise,” I didn’t readily recognize that the weeks of sedentary behavior made me feel terrible!

I tend to get the “season-change blues” in late October-early November every year.  The darkness overwhelms me.  The garden is put to bed, so I am less likely to go outdoors.  School is in full swing, and I have essays to grade. Consequently, late fall becomes my season to sit.  I blamed seasonal affective disorder for my woes, but opted to wait for the spring thaw rather than to be pro-active.

My doctor was very enthusiastic about Spark. He described how 1990-1999 was the Decade of the Brain and that research completed in that decade helped doctors to understand the brain and how to treat conditions related to brain function (like depression, A.D.D., Parkinson’s, and Alzheimers).  Ratey’s book takes that foundation and incorporates further research related to the connection of exercise to improvements in behavior, intelligence, mood, recall, and hormonal changes in women. The subtitle, Supercharge Your Mental Circuits to Beat Stress, Sharpen Your Thinking, Lift Your Mood, Boost Your Memory, and Much More, describes the book in a nutshell.

Many of the readers of my blog seem to find Living the Sweet Catholic Life when searching “Maybe I Have A.D.D.” The chapter of Spark called “Attention Deficit: Running from Distraction” especially attracted my attention as I scanned the Contents. I long for order and schedules (which is common amongst those with A.D.H.D.) but I simultaneously resist such “rigid restrictions.”  My husband is regimented. He has trained for marathons and ultra-marathons while working full time and completing his MBA.  When he was in school, he scheduled his study times and wouldn’t let anything trivial disrupt his routine.  I wonder just how much running has helped his ability to focus and learn—he finished the MBA with a 4.0 GPA!

Though I admire my husband’s routines and dedication, I cannot seem to implement similar schedules for myself. We joke that I’m a free spirit (translate: bird attracted to shiny objects). When I grade papers, I’m lucky to make it through two essays before I search for something online—usually related to the paper, but sometimes not. I desire the results that can be achieved from schedules, but I can’t seem to make myself accountable. I’ve started three novels, two of which I desperately want to complete, but they sit in my Novel folder on the computer with just 20 pages each.  I know what needs to be done, and mostly I get the important stuff done on time.  However, I believe I’m capable of more.  Regular exercise just might be the answer I’m seeking.

When my daughter and I trained for the half-marathon, I made sure we kept to a running schedule.  The routine was good for both of us.  After the race, life was busy and we didn’t seem to have time to run.  In the weeks prior to my regularly scheduled physical everything seemed to change. My body hurt.  My PMS was worse than ever.  I cried for no reason.  When I described the symptoms to the doctor and he recommended exercise as the remedy, I took it seriously.  That evening, I made it back to my Irish dance class for the first time in over a month.  I told my family, “I have to go to dance tonight—doctor’s orders!”  I danced for two hours, and it felt so good to be back!  I made it for four consecutive weeks before the holiday break, and my blues seem to have melted away.  I have started running again, but not as regularly as before the race.  Just those two or three days of exercise each week have already improved my health.

So, exercise is good medicine for me, but why did I review the book?  In part, because it’s exciting information! The phrase “something for everyone” comes to mind.  Do you have kids?  They will do better in school if they exercise daily, especially before they study. They will be healthier overall and have better behavior. Are you or someone you know and love reaching the golden years?  Regular exercise can tremendously improve the quality of life for seniors, helping their minds stay sharp and reducing the need for a cabinet full of prescription drugs.  Are you a woman?  Exercise helps women who are pregnant have healthier babies and reduces PMS and Menopausal discomforts.  ADHD?  Anxiety? Depression? Addiction?  All of these health problems can be treated safely and effectively with regular exercise.  And the side effects are a healthier brain and body, with reduced risks for heart disease and diabetes.

Not convinced that exercise will make a difference for you?  Consider the following studies described in Spark.  First, the Naperville District 203 school students. The 19,000 students are some of the fittest and smartest students in the nation.  Exercise is central to the district’s success.  Next, a new mom experienced severe postpartum depression.  After meeting with Dr. Ratey, she and her husband went directly to purchase an elliptical machine during a Friday afternoon rainstorm.  Her husband wanted so much for her to feel better that he assembled the machine immediately.  She felt the physical burn from the workout and knew she was doing something good for her body.  He first noticed that she was finally sleeping soundly, which quickly alleviated the exhaustion and improved her mood.

Finally, and most profoundly, was a nun who had exercised her mind (along with the other sisters in her order) through “vocabulary quizzes, mental puzzles, and debates about public issues” (243).  Sister Bernadette died at age 85 of a heart attack.  Though she was mentally sharp until her death, a postmortem examination of her brain (which she had donated “to science as part of an ongoing study…by epidemiologist David Snowdon) indicated massive damage from Alzheimer’s disease.  The use it or lose it principal applies here.  Though the damage will still occur for those afflicted with Alzheimer’s or Parkinson’s, physical and mental exercise, and especially social interaction, will keep us healthier than any pill created by modern science.

God has given us the tools to care for our bodies and brains—exercise and interaction with people.  Our modern culture fosters a sedentary lifestyle and too much screen time.  I am inspired by Dr. Ratey’s book, and I hope to share the message that physical fitness is about more than “looking good” or “being thin.” Physical fitness strengthens our minds and bodies—improving our quality of life.
Note: Before beginning any exercise program always consult a physician.  Likewise, do not stop medications unless advised to do so by your doctor.