Stunning 4-D ultrasound imagery of children smiling, yawning, and kicking in the womb may be coming to a mobile phone near you – in the hands of those who need it most.

The Cleveland Right to Life Education Fund announced June 28 that it is launching a new campaign to get the scientific evidence of life in the womb in the hands of abortion-bound mothers through the use of smartphone technology.

Already known for sponsoring the Truth Booth – an unmanned kiosk showing ultrasound images of the child in the womb in public venues throughout the United States and Canada – the Cleveland Right to Life Education Fund is now using QR Codes to expand the reach of its message to those who need it most.

Smaller than a postage stamp, a QR (or Quick Response) Code is the trademark for a type of matrix barcode that most smartphones can scan, often sending users to a product website – a technique now frequently used by companies and advertisers. 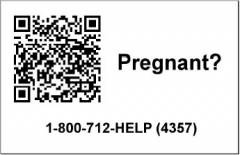 By placing a QR Code on business cards and other literature, said the group, pro-life activists can now provide those considering abortion a “window to the womb” – and one last chance to rethink their decision.

When scanned using a smart phone, the QR Code will provide a three-minute video that shows 3D and 4D ultrasound images of a developing child from 8 to 34 weeks.

“Imagine sitting in the waiting room of an abortion clinic and being able to see 3D and 4D ultrasound images of an unborn child through literature provided by a sidewalk counselor,” said Molly Smith, president of Cleveland Right to Life. “Statistics show that many women considering an abortion who see an ultrasound choose life.”

The video is the same one available through the Truth Booth, which already has been seen by millions of individuals at malls, community fairs, schools and other public and private arenas. It provides information about prenatal development and pregnancy in a visual form for people to process without cumbersome words or confrontation.

“The Truth Booth is factual, scientific, creative, gentle and informative in its content presentation, allowing all age groups to comprehend our early development with clarity,” said Susan Cipriani, manager of the Truth Booth. “It is simply pictures of the developing child, not a provocation for controversy.”

“We know from feedback we’ve received that the Truth Booth has had a positive impact on countless women struggling with the most important decision they will ever make. Now, through the QR Code, that impact has the potential to reach women in every country through their phones.”

The Cleveland Right to Life Education Fund, through its educational program Truth Booth International, is making the QR code image available for free downloading at www.truthbooth.org. The QR code can be printed on the back of business cards or on any counseling literature.