Trending Now
You are at:Home»Featured»Niger: They set fire to Our Churches, But We Still Love Them
By ACN-USA News on July 16, 2015 Featured, Those in Need 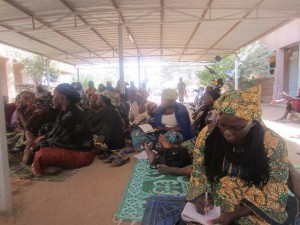 Mass in an improvised setting in Niger; ACN photo

NEW YORK—Six months after extremist Muslims attacked Christians and burned down a number of churches, the local faithful remain fearful—but a local bishop reported that Catholic life in Niger continues to flourish.

In an interview with international Catholic charity Aid to the Church in Need, Bishop Ambroise Ouédraogo of Maradi recalled the events of Jan. 7, 2015, when Muslims—goaded on by the deadly attack on the Paris-based satirical magazine “Charlie Hebdo”—rioted in the capital city of Niger and the town of Zinder. In the end, save for the cathedral in Niamey and a single church outside the city, every single church in the country was attacked, looted and set on fire.

The violence came as a big shock in a country where Muslims and Christians had lived together in relative harmony. “Why did they attack us, especially since we have had such a good mutual understanding,” the bishop asked, while speculating that “they mixed up ‘Charlie Hebdo’ with Christianity,” as if Christians had drawn the caricatures of the Prophet Muhammad that the Paris weekly was known for.

The bishop said: “Freedom of the press in Europe is fine. But you have to handle this freedom with caution and be aware of the impact it will have in other countries. The sensibilities in Africa are different from those in Europe.”

Fearing further attacks, some 200 Christians from Zinder fled to the neighboring countries of Burkina Faso, Togo, Benin and even Nigeria. Most have since returned. The local community now celebrates Mass in the open or in halls decorated for the occasion. Yet, the people’s faith is strong, said the bishop: “Living communities have emerged and I believe that is a blessing.”

Still today, Muslims don’t know how they should conduct themselves towards Christians after the attacks. “They’re out of their depth,” said Bishop Ouédraogo; “they are sorry for what happened, but they can’t say it officially.” So far, no one has been charged in the violence.

Many Muslims were amazed that Niger’s Catholic bishops quickly proclaimed forgiveness of the perpetrators. “They set fire to our churches, but our hearts are still ablaze with love for them. Christian or Muslim—God wishes good fortune for all people,” the prelate said.

Through an interreligious commission, Niger’s Catholics and Muslims collaborate in the area of education and charitable work, as both communities help build up one of the poorest countries in the world, which is regularly plagued by drought and famine. Of the population of 17 million, 98 percent are Muslims; there are just 21,000 Catholics in Niger, comprising the Archdiocese of Niamey and the Diocese of Maradi.