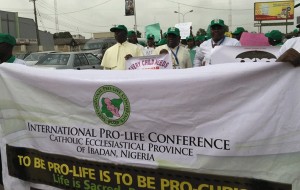 “We had to limit the number of people in each diocese who could come,” said one organizer of a pro-life and pro-family conference in Ibadan, Nigeria. Over 1,500 filled the auditorium, and even then people spilled outside.

One region with a small Christian population extended invitations to their Muslim neighbors who gladly attended.

Bishops in this city near Lagos hosted the forum – and the joyful team of bishops and the archbishop led or participated in all the activities.

“We could never get so many bishops” at a pro-life event in Europe, exclaimed one British speaker.

Archbishop Gabriel Abegunrin explained his enthusiasm for putting on the two-day event.

New technology, attitudes and lobbies backed by powerful interests “challenge traditional beliefs, established faith and conventional practices,” he said. “We can together with experienced people from around the world identify contemporary challenges to human life, marriage and family and educate our people better on how to recognize and surmount those challenges in order to live integral, credible Christian lives.”

“The icing on the cake was the march,” said Jerry Okwuosa, a pro-life activist for 20 years. Marchers sang, “Yes, yes to life. No, no to death,” a song written for the conference as people in an outdoor market cheered them on and joined the march.

One nurse who attended used to work for Pathfinder, an international group that promotes abortion and sexual rights by weakening moral beliefs, especially of health care providers. Her son would play with the hordes of excess condoms at their house, more than could be distributed. Later he challenged her on Pathfinder’s work, and she resigned. Now he is a priest and helped organize the conference.

Most of the speakers were Nigerian professionals and religious leaders, covering topics like engaging in social media, trends in assisted reproductive techniques, sexuality education, secular humanism, domestic violence, and understanding legislation. Speakers from the UK, US and Ghana described international pressures to spread abortion and sexual license, and ways to counter them.

It “surpassed my expectations,” said Obianuju Ekeocha, who the Archbishop credited with inspiring the conference. It was the fourth event the Nigerian scientist and founder of Culture of Life Africa helped plan by inviting speakers to cover topics spanning abortion, strengthening family life and resisting harmful trends.

Teachers, nurses, students and religious leaders – “people from all walks of life” – who filled the conference hall are “so important because they serve the poorest of poor – like teaching and health care in communities that other doctors will not go,” Obianuju said.

The speakers “sensitized people” to “pro-abortion organizations with innocuous names like Planned Parenthood that they never knew before were anti-life,” said Obianuju. “UN agencies, associated with morally objectionable projects will be treated with suspicion because people now know their hidden agendas and track records.

One jovial bishop – who has competed in “You’ve Got Talent” televised shows – frequently burst into song to warm up the crowd, changing the words of popular music to address God while keeping the catchy tunes.

“Just call my name,” sang Bishop Adetoyese Bedejoe to the Michael Jackson tune, “and He’ll be there.”

At a private dinner to cap off the event, he told the leaders, “God mixing with man can do powerful things.”