Trending Now
You are at:Home»Featured»Nigeria’s Christmas Present: Blown Up Christians
By Raymond Ibrahim on December 30, 2011 Featured, Those in Need 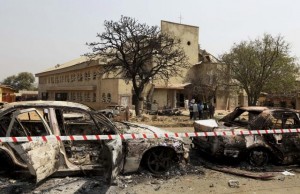 Nigeria: St Theresa Church after it was struck by two car bombs on December 25, 2011

Several churches in northern Nigeria were bombed December 25, in what has been described as “Nigeria’s blackest Christmas ever.” The attacks, perpetrated by the Muslim militant group Boko Haram, killed at least 39 people, “the majority dying on the steps of a Catholic church [in Madalla near the capital of Abuja]after celebrating Christmas Mass as blood pooled in dust from a massive explosion.” Charred bodies and dismembered limbs lay scattered around the destroyed church.

As usual, the world offered the requisite, if perfunctory, condemnations. Of note, however, is the word so many Western leaders, from the White House to the Vatican, used to characterize this latest Muslim attack on Christians—”senseless”—a word that implies no motive, no goal, no rhyme, no reason.

Although Boko Haram has been bellowing its straightforward and far from “senseless” goals for a decade—enforcing Sharia law and, in conjunction, subjugating if not eliminating Nigeria’s Christians—one can see why so many are decrying the Christmas Day bombings as “senseless”: the mainstream media’s coverage offers little by way of context or continuity concerning the attacks.

The sect, known as Boko Haram, until now mostly targeted the police, government and military in its insurgency effort, but the bombings on Sunday represented a new, religion-tinged front, a tactic that threatens to exploit the already frayed relations between Nigeria’s nearly evenly split populations of Christians and Muslims…

This sentence is fraught with problems. For starters, Boko Haram has been terrorizing Nigerian Christians for years, killing thousands of them, and destroying hundreds of their churches. Considering that just last Christmas Eve, 2010, Boko Haram bombed several churches, killing nearly 40 Christian worshippers, the New York Times‘ characterization of these latest attacks as “represent[ing]a new, religion-tinged front” is not only unconscionable, but unprofessional.

Boko Haram—whose full name in Arabic is “People of Sunna for Da’wa [Islamization] and Jihad [Holy War]”—has, for a decade, been representing a very “religion-tinged front,” that is, an Islamic front, one that is hostile to all things non-Muslim, with Christians at the very top.

In just the last couple of months, Boko Haram has carried out attacks on dozens of other churches, bombing some, torching others. In one instance, they opened fire on a congregation of mostly women and children, killing dozens; they executed two children of an ex-terrorist because he converted to Christianity; they murdered Christian pastors in cold blood; they “went to shops owned by Christians, ordering them to recite verses from the Quran,” killing those who could not.

Just last month, hundreds of armed Muslims from Boko Haram invaded Christian villages, “like a swarm of bees,” killing, looting, and destroying. At the end of their four-hour rampage, at least 130 Christians were killed. Forty-five other Christians in another village were slaughtered by another set of “Allahu Akbar!” screaming Muslims. Hundreds of Christians are missing; thousands have fled the region.

Of course, you would not know any of this reading Nossiter’s NYT report, which asserts that Boko Haram’s attacks on Christians are somehow “new.” The report willfully refracts reality through the approved paradigm of political-correctness—a paradigm that always minimizes or ignores Muslim persecution of Christians around the world (lest it appear to “side” with Christians), while always putting the best spin on Muslim violence (lest it appear critical of Islam).

Moreover, the assertion that there are “already frayed relations between Nigeria’s nearly evenly split populations of Christians and Muslims” suggests both camps are equally hostile—even as one seeks in vain for Christian terror groups that bomb mosques in Nigeria to screams of “God is Greatest!”

The report goes on to offer more canards, including the suggestion that the Nigerian government’s “heavy-handed” response to the terrorists is responsible for their terror:

Critics of the government campaign against Boko Haram say that the effort has not only failed but has increased the sect’s appeal, because the security forces’ heavy-handed tactics have given it new sympathizers.

The NYT report even manages to insert another mainstream media favorite: the myth that poverty-causes-terrorism—this despite the acres of evidence that many of the most notorious Islamic terrorists are well educated and come from wealthy families, and that the terrorists’ Christian victims are often worse off than they. Regardless:

The sect’s attacks have been further bolstered by festering economic resentment in the impoverished and relatively neglected north, which has an exploding birthrate, low levels of literacy and mass unemployment.

In short, Boko Haram’s actions have been anything but “senseless”: its terror campaign has seen Christians reduced in number—whether by killing them off or tormenting them into fleeing their villages—and has seen hundreds of churches eliminated. These results correspond quite well with Boko Haram’s own stated goals of creating an anti-infidel Sharia state.

“Senseless” is better reserved for the New York Times and other mainstream media that—by disinfecting, delousing, and deodorizing events until they correspond to the ideals of their writers and editorial boards—distort and lie about the truth.