Trending Now
You are at:Home»Featured»Night Falls on Civilization
By Daniel Greenfield on March 25, 2013 Featured, International Issues, The Social Order 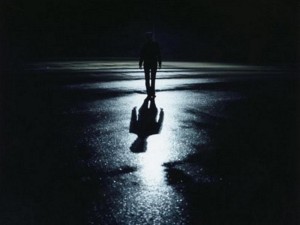 Forget the World’s Fair, we now have a new way to celebrate human accomplishment. Instead of seeing a vision of the future, we turn off the lights and sit in the dark for an hour.

Environmentalism has degenerated into a conviction that all human activity is destructive because the species of man is the greatest threat to the planet and all life on it. Each death, each act of undoing and unmaking, each darkness that is brought about by the cessation of humanity becomes a profoundly environmentalist activity.

Kill yourself and save the planet. Put out the lights, tear down the city and let the earth revert to some imaginary primeval paradise free of all pollution; whether it is the carbon breath of men, dogs and cows or the light pollution of their cities.

While we take electric light for granted — being able to read and write after dark is a technological achievement that transformed our civilization. Animals are governed by day and night cycles. Artificial light made it possible for us to work independently of the day and night cycle.

During the recent extended blackout after Hurricane Sandy, some of us had a brief period of reverting to a pre-technological civilization in which work was governed by day and night cycles. And that was a reminder that there is no way to measure the increase in knowledge gained from the conquest of the darkness. There is no better measure of the unthinking contempt of the environmentalist movement for that achievement than a call to turn off the lights and sit in the dark.

Like all environmental gimmicks, Earth Hour is perverse and hypocritical. Far more energy is consumed promoting it, then is saved by practicing it.

Websites switch to black, even though displaying black on television sets or monitors consumes more energy. Turning off electricity to entire buildings after working hours and then turning it on costs more than letting it run. And getting 90 million people across the country to turn their power on and off at a scheduled time is an energy savings disaster. And since power companies draw down on their more expensive ‘green’ generators first, Earth Hour actually shuts down “green” power.

But its sponsors don’t claim that Earth Hour saves energy or prevents us from polluting the globe. Like every environmentalist stunt from flying rock stars around the world on jet planes to carving thousands of statues made of ice and then leaving them to melt in a public square, Earth Hour is meant to spread awareness.

Spreading awareness is the sole purpose of most environmental activism. Awareness spreading doesn’t make anything better, but makes people feel guilty, outraged, hopeful or some combination of the appropriate political sentiments in the face of an imminent armageddon that can only be fought by convincing everyone to be deeply concerned by it and disdainful of everyone who stands outside their Chicken Little consensus.

The WWF [World Wildlife Fund a.k.a World Wide Fund for Nature], Earth Hour’s godmother, has learned that shrill attention seeking is a reliable fundraising method. One of the WWF’s more memorable fundraising methods was an ad that showed hundreds of planes headed toward the World Trade Center, to highlight just how much more important their work is than fighting terrorism. Franny Armstrong of Age of Stupid, which was promoted by the WWF, ran a 10:10 campaign in the UK, whose ads featured environmentalists murdering dissenters, including a group of schoolchildren. The ads are just ads, but London’s leftist former mayor, Ken Livingstone had said of Age of Stupid, “Every single person in the country should be forcibly sat down on a chair and made to watch this film.”

That is the dark side of environmentalism. The most active non-Muslim domestic terrorist group is environmental. The undercurrent of violence finds easy purchase in environmentalism’s creed that the only real problem with the world is people. No amount of turning off the lights is enough. Eventually you come around to having to turn off the people.

The Nazis were among the most enthusiastic environmentalists of their day, even the term ‘Ecology’ was coined by Ernst Haeckel, whose racial views served as precursors to Nazi eugenics. But while Nazi environmentalist believed that we were all animals, they insisted that some animals were better than others. Modern environmentalists believe that we are all worse than animals. In their view we are both natural and unnatural. Natural because we come from the ape and unnatural because we are intelligent. We live on the planet, but our intelligence excludes us from ever belonging to it.

The incompatibility of productive man with the natural world is a fundamental tenet of the environmental movement. Everything we do is destructive, because of what we are. We are tool builders, inventors and producers. And the environmentalist movement is aimed at convincing us to stop being these things. To turn off the lights, make do with less and march back to the caves with a few clever ad campaigns and a catchy tune. 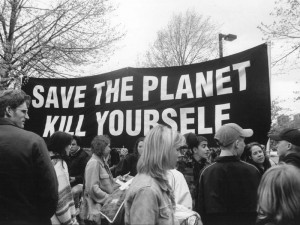 Not only mankind must go, but all the animals that man has domesticated and bred — cows, dogs and cats. That is why PETA kills thousands of dogs and cats a year, promotes the euthanasia of wild cats and pet spaying and its staffers have even been known to kidnap animals and then kill them. It is why the Global Warming crowd has made cow emissions into their whipping bovine.

It’s not enough to kill man, tear down his cities and put out his lights. His cats and dogs and his cows and sheep must also die.

Environmentalism is not motivated by a love for all creatures, but by preference for a prehuman world of natural wilderness uncultivated by man. The political leftist romanticizes the noble savage over the civilized man and its environmentalist arm romanticizes the jungle over the thousand acre farm. It prefers the the swamp to the garden, the wolf to the dog, and the tiger to the house cat.

This preference is not scientific, it is emotional, rooted in an antipathy to industrialization and human development. It wraps itself in the cloak of science, but it is a reactionary longing for a romanticized past that never existed.

In the environmental bible — man is the source of all evil. The transition from the nomadic to the domestic, the village to the city, and the craftsman to the factory, is its version of original sin.

The environmentalist began with a distaste for human civilization and the fetishization of the rural farm life of the peasant. The champions of this “naturalism” were invariably urban artists and writers from the upper classes who were enthusiastic about being in touch with nature. After them came the “Nature Fakers” crafting myths about the high moral standards of wild animals. Domestic animals in such stories were always wicked and dumb, while wild animals lived deep and spiritual lives out in the woods. And so the animal kingdom was subdivided into the noble savage and the uncle tom.

The world was divided into two polar opposites, the green and the gray, in an apocalyptic struggle. Either man would drown the world in industry, or he would return to a natural way of life through a lethal virus (Mary Shelley, The Last Man, 1826), a devastating war (H.G. Wells), oppressive social policies (Edward Bellamy) or eco-terrorism (The Monkey Wrench Gang). The more civilization grew, the more apocalyptic the scenarios became culminating in the two great environmental myths; nuclear winter and global warming. These apocalyptic myths have served the same purpose for environmentalists as apocalypses do for all religions. They predict a time when the sinful order is overturned and the earth is renewed to make way for the faithful. 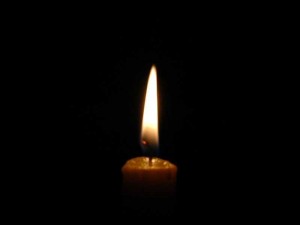 Man is the environmentalist’s devil. He must be beaten, broken and subjugated. Even the animals he has bred, who are the spark of his genius, must be taken out and killed. Take away his food and his power. Blame him for the natural cycles of the planet and the inevitable extinction of species that goes on whether he is there or not. Take away his technology and his inventions. Tell him that the humblest bacteria is better than him, for it is dumb and follows its natural instincts, while he insists on using his mind. Take away his primacy and his learning. And then leave him in the dark.

The environmental movement is tenacious, fanatical and deceptive. Its creed is the undoing of all human progress. There is money to be made from that, as there is in all revolutions, but beneath the inconveniences of living under an environmental regime, from dirty clothes to high taxes, while being forced to listen to the hypocrisies and false pieties of the Gorean clergy of environmentalist activists heating their mansions while the poor freeze in energy poverty, is the darker reality that environmentalism is an anti-human movement with a vicious hostility toward man and the civilization he has built. Whatever he has built, it must destroy.

The gap between darkness and light is a profound symbol in every civilization. The light of knowledge pitted against the shadowy dark of ignorance. The light reveals, but the darkness hides.