Trending Now
You are at:Home»Featured»No Compulsion in Religion
By Patrick O’Hannigan on March 30, 2011 Featured, Poetry 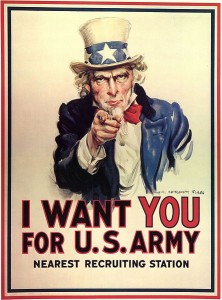 Friends, Romans, countrymen, lend me your ears:
I come to bury Uncle Sam, not to praise him.
The evil that men do lives after them;
The good is oft interred with their bones;
So let it be with Uncle Sam
And those for whom he stood.
His critics call him too ambitious:
If it were so, it was a grievous fault
And grievously hath he answer’d for it,
Both in the Civil War and afterward,
Stricken with a multitude of imperfections.

Look you where towers once stood paired,
Or near the river where warriors still meet
In damaged corridors.
Remember when the valor of hijacked passengers
Turned a Pennsylvania field into an altar.
American soil bears witness to Muslim rage,
And to the irony lost on people
Who reach always for the one verse in the Koran
Saying there is no compulsion in religion.

I must then speak of common sense traduced
And trust betrayed by lawyers
Who found a right to pilgrimage
When Mecca looked better
To an Illinois teacher
Than her students, or her contract.
Our Founders would have granted her leave,
We’re told, though she had but
Nine months’ service at the school
Before requiring three weeks off
For haj while classes were in session—
But there is no compulsion in religion.

Perhaps the definitions are unclear.
Would freedom then explain
Why Ethiopian Christians
Flee their homes
While Muslim neighbors burn them down?
Freedom should be made of sterner stuff.
O judgment! Thou art fled to brutish beasts,
And men have lost their reason.

In days of old, we looked to
Bernadone, Martel, and Sobieski,
Even Jefferson and (in his way) Reagan
Will Eric Holder fill those shoes?
To ask the question is to answer it.
Yesterday we stood against the world when needed,
But now we bomb where we are bid
Pretending that jihadists
Are as few and fringe
As twenty-something members of
The Westboro Baptist Church.

We prop up the House of Saud,
And praise jihad
As a struggle for self-discipline
(Are there 12-step meetings for anonymous suicide bombers?)
We lump jihadists
With the joker, the smoker,
And the midnight toker.
Because to do otherwise
Would take the Koran seriously:
And so we learn nothing
From the crucial difference
Between our martyrs
And their own.

Shahbaz Bhatti has gone to his reward
He died for calling yonder Friday “Good”
And holding fast to Jesus
In Pakistan, of all places.
But there is no compulsion in religion
Says Reza Aslan,
Who writes from California.
As though Pakistan were on another planet.
Karen Armstrong says the same
Because her fight from England
Is more with popes
Than with ayatollahs.

And yet, sweet friends, they might be right:
I speak not to disprove what apologists for Islam have written,
But here I am to speak what I do know.
If there be no compulsion in religion,
That lack has not reached Egypt
Where only virgin women
May protest the regime
And cruel exams make sport of the fair sex.

Think you that violence has gone?
More like it moves
From one hand to the other:
No force in faith is not the same as peace.
Good friends, let me not stir you up
To sudden floods of mutiny
Or unkind thoughts of any man’s religion.
Yet ponder this:
Can there be space for peace
Without a cleft ‘tween church and state
Utterly foreign to the Koran?

Khomeini – hostage-taker – put it thus,
Before he shuffled off this mortal coil.
Calling those who claim
That Islam decries war,
“Witless know-nothings.”
Perhaps his dim view of degrees
Matched his scorn for embassies,
Or he who held a nation in his grip
Was insufficiently Islamic;
We cannot say.

When pilgrims filled with desert words
Think paradise is roofed with swords
They’re not alone.
(I tell you that which you yourselves do know)
Must we then countenance
Special terms of employment, and
Trips made in the name of
A faith so easily hijacked,
Or would it be impertinent to ask
Why Congress could not address the subject
Without extra men-at-arms at the doors of its hearing rooms?
Overtime pay for cops in the Capitol
Trumps favorable book reviews
For Muslim scholars in California
And the ex-nuns who agree with them.

There is no compulsion in religion, we are told,
And – like Jimmy Buffet – I “don’t want to land on no ayatollah,”
But that Iranian despot had a point:
Religious constraints are moot when your faith
Has a political arm from which it is inseparable–
Which means in Lent and every other time,
That only Jesus is polite enough
To knock gently at the doors of our hearts
And open our eyes if we open our doors to him.