Trending Now
You are at:Home»Featured»North Dakota’s Sunday, No Rest from Floodwater Threat
By Mark Armstrong on June 14, 2011 Featured, Live in Christ 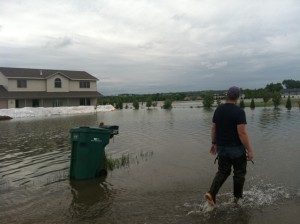 Bismarck, North Dakota… It’s Pentecost Sunday, the day the Holy Spirit appeared as tongues of fire on the Apostles’ heads and everyone could understand what was being said.  We could use a little of that around here as each day more all-time record floodwaters scream down 750 miles of the Missouri river, leaving an every widening wake of destruction.

North and south of Bismarck/Mandan in the unprotected “river bottomlands” on the 100-year floodplain, over 800 homes have been lost already, forcing out nearly 4,000 people.  More are flooding daily.  These landowners thought they had protection from Garrison dam, north upriver 70 miles from Bismarck.  And they did since 1953. They don’t anymore, as the flood control spillway gates opened for the first time in history last month and keep opening wider nearly daily.  In just a couple of days 150,000 cubic feet of water per second will pour through the Garrison system.  This is an all-time record by a factor of  nearly 2.5 times, 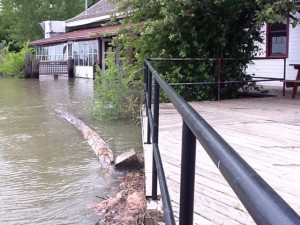 when a flow of 65,000 cubic feet per second was sustained in 1975.  Northwest in Montana, at the dam above Garrison, Ft. Peck, there are similar record outputs coming into the already full Garrison reservoir.  Record snowpacks from the Yellowstone river system could tilt the scales to even higher releases depending on rain events and summer melting patterns.  It is an historic event that will unfold through the middle of August before it will even begin to recede.

It is already going to be, when it is finally over, the worst natural (some will say man-made) disaster to ever strike North Dakota.  Up and down the Missouri from here, from the Crow Indian Agency in Montana, through North Dakota at Williston, here to Ft. Yates to Pierre and Yankton in South Dakota, and down into Nebraska and Iowa, the water is causing hundreds of millions of dollars in damages to homes and other buildings.  The powerful Big Muddy is out of its 60-year old man-made channel 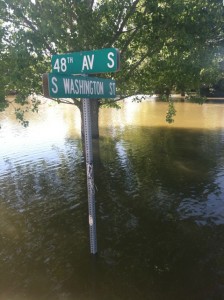 and uprooting 60-year old forests as it carves new channels and threatens government infrastructure.  The record snow packs are just starting to push even more water into the system of full reservoirs at all six mainstem dams on the Missouri river.

I serve as an elected official to many of those now homeless as a Burleigh County Commissioner, having won a second term to office last November.  It has been agonizing listening to the plight of people these last three weeks and visiting them as they see the Missouri river take away their homes.  Most did heed the warning to take their possessions to higher ground before the roads were washed out and access to their homes could only be attempted by boat or canoe.  Our government community shelters have not had to activate yet either. All four thousand evacuees found temporary homes in either friends or relatives houses on higher ground.  Some decided to take the family camper and fill up the nearby campgrounds.  It is not what they planned for this summer.  The waters will be at major flood stage through at least mid-August and many will not have homes to go back to ever again. 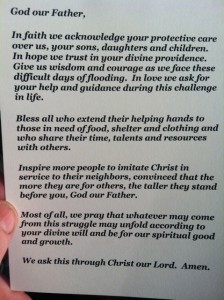 When we first moved here in 1990, stores were still closed on Sunday.  A ballot vote of the people allows stores to open after Noon on Sundays.  Because of the need for emergency supplies to either shore up protective dikes or other construction materials, the state is allowing stores to stay open 24/7, if they choose to.  At Cathedral of the Holy Spirit, the Diocese of Bismarck has printed special prayers cards that retiring Bishop Paul Zipfel approved for use.  Each Friday at the Cathedral from 8-9 p.m., a special one hour of Adoration is devoted to the flood crisis.  It affects everyone, not just the ones who have, or will lose their homes.  It also brings people together.

Man built the dams that that are causing this historic flood.  For 60 years the dams protected these communities up and down the 750 miles of the Missouri.  The dams now have set up the conditions for a flood that never has happened before during the summer months.  All the great floods before were in the spring and the result of ice jams on the Missouri. The dams did buy some time and allow people to move their possessions to higher ground and give local governments 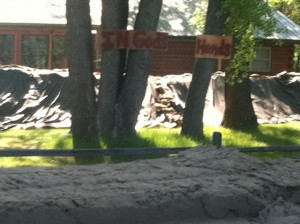 and the Army Corps time to construct some temporary protective levee systems for people in more densely populated metro areas.  Those systems now need to monitored and protected through at least mid-August.  And if releases are pushed higher those levees will need to be raised, if possible.

So we wait for what is coming.  Knowing it is going to be a long summer, with no access to the river we all used to love.  We pray that whatever may come we place our trust that God will deliver us. Amen.