Trending Now
You are at:Home»Featured»(Not) By Popular Demand
By Denise Bossert on June 25, 2014 Featured, Marriage, The Homosexual Agenda

It happened when I was in middle school. The Presbyterian Church held its annual General Assembly in Baltimore one year and Philadelphia the next. My father was selected to be a delegate from his presbytery, the first year as a seminary student and the second year as a member of the clergy. It was my first encounter with the clash between conservatives and liberals within a faith community. I remember seeing picketers in front of the convention center where the delegates gathered to make decisions regarding the denomination and its trajectory. I asked my dad why the picketers were there.

They wanted the denomination to approve the ordination of practicing homosexual clergymen and women, he said. “They might do that?” I said in disbelief.

“Most of the delegates are against it,” he said. “It’s not going to be approved.” And the measure wasn’t approved – not that year.

But, like many denominations, the Presbyterian delegates decided things by vote, and the gap between the “conservative” and “liberal” delegates narrowed every year. American culture was changing, and soon it would affect the stance of the denomination.

In 2008, the Presbyterian Church (U.S.A.) lifted a ban on ordaining gay and lesbian clergy. They passed the final decision on to individual presbyteries for local approval. In 2014 (June 19) the Presbyterian Church (U.S.A.) went even further by voting, 3 to 1, to permit clergy to marry gay couples. The 175 presbyteries within the denomination are expected to ratify the decision soon. Already Presbyterian pastors are permitted to marry gay couples in States were gay marriage is legal.

It is a story that is told and retold in Protestant faith communities. Truth changes with popular opinion. It not only affects denominational teaching on gay marriage and ordination, but it has affected denominational stances on women’s ordination, artificial contraception, and abortion.

I grew up in faith communities that viewed artificial contraception as practical and necessary, but a mere forty years earlier, no denomination supported it.

In my formative years, I didn’t know any denominations that ordained women. Then my dad switched denominations (Wesleyan to Presbyterian), and it was suddenly in vogue. Today, many of the most conservative Protestant denominations ordain women. Likewise, abortion is up for debate in almost every faith community, with some viewing it as a fundamental right, some opposing it adamantly, and some refusing to take sides.

Change comes slowly in these faith communities, over the course of generations, but lately at a quickening pace. I suppose it is inevitable that the culture will impact the faith, but it should never change the essence of right and wrong. Truth is unchangeable.

There are only two faith communities that have withstood the changing tides of time. The Orthodox and the Catholic Churches. Both teach that the tenets of the faith do not change once they are laid down as official Church teaching. It isn’t about being conservative or liberal, Midwestern or cosmopolitan. It is about truth. 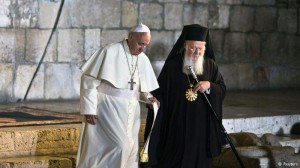 Pope Francis & Patriarch Bartholomew at the Wailing Wall, May 2014

In May 2014, Pope Francis met with Patriarch Bartholomew I of Constantinople in Jerusalem. They celebrated the 50th anniversary of the historic meeting between Pope Paul VI and Patriarch Athenagoras I of Constantinople. The Orthodox and Catholic Churches are closer to unity than they have ever been. The possibility of unity between these two faith communities is very real. After almost one thousand years, the two Churches have continued to move on a steady course in the same direction. In a rapidly changing world, it seems almost miraculous that they have moved throughout history along the same course.

In a world that moves with the changing tides of culture, these faith communities have remained steady, firm, unchanging. It is almost as if the Lord wanted to preserve them and bring them together at a time when the world most needs to see a miracle of fraternity, unity, and adherence to truth that defies the odds.

While other faith communities go with the flow of change, these successors to St. Peter and St. Andrew continue to sail beside one another as they fulfill the Master’s call to be fishers of men regardless of the winds and waves that swirl about them.