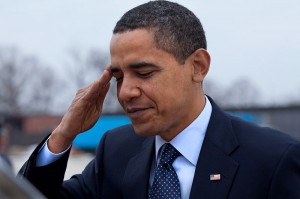 For some time, the outlines of an Obama Doctrine have been apparent.  It can be summarized in nine damning words:  Embolden our enemies.  Undermine our friends.  Diminish our country.  These days, it is hard to avoid proof that these outcomes are not inadvertent, or attributable to sheer and sustained incompetence.  Rather, they are a product of deliberate decisions approved, we must assume, by the President himself.

Consider last week’s announcement by Secretary of State Hillary Clinton that the United States was going to “engage” the Muslim Brotherhood in Egypt.  At one fell swoop, Team Obama hit its doctrinal trifecta:

America arguably has no more mortal enemy than the Muslim Brotherhood (MB or Ikhwan in Arabic). The MB’s own documents – including a number of those introduced into evidence by the Justice Department in the largest terrorism financing trial in U.S. history, the Holy Land Foundation prosecution – make clear that this international Islamist organization seeks to impose its politico-military-legal doctrine of shariah on our country.

One such document describes a “phased plan” that calls for the Ikhwan  assiduously and stealthily to pursue precisely this objective.  Ultimately, the plan calls for the use of violence to take over our government, clearing the way for the triumph of Islam worldwide and the reestablishment of a global ruler, the Caliph, who will govern in accordance with shariah.

Sounds crazy, right?  Or at least unachievable?  It does – at least until you realize that the message being sent by the Obama administration is that, despite such ambitions, we are prepared to legitimate and deal with the Muslim Brothers who are animated by them.

Well, perhaps you say, just because we are recognizing that the Muslim Brotherhood is likely to be a big player (read, the winner) in the elections currently scheduled for later this year in Egypt does not mean we are going to facilitate their aspirations in this country.  Unfortunately, that is exactly what it means.

By engaging the Ikhwan in its native land, the Obama administration is effectively eliminating any lingering impediment to the operations of its myriad front groups in this country.  Even before Secretary Clinton’s announcement, many of them have already been accorded unprecedented access to and influence in the U.S. government.  In fact, it stands to reason that one of the factors prompting Team Obama to embrace the Muslim Brotherhood is the success of such influence operations within the United States.

In addition to emboldening our enemies by reinforcing their conviction that we are in decline, the Obama administration’s MB initiative undermines our friends.  That is  most obviously the case with respect to Israel, a nation already reeling from the President’s serial, gratuitous acts of enmity towards the Jewish State.  Now, his embrace of the Ikhwan can only exacerbate the worsening strategic environment the Israelis have faced in the months since the United States pulled the plug on Mubarak.

For example, Israel has been seriously buffeted by actions taken to date by an Egyptian military clearly under the influence of the Muslim Brotherhood.  These include steps taken to: restore relations with Hamas and Iran; broker the Palestinians’ so-called “unity government; open the Raffa crossing into Gaza; afford a hero’s welcome in Tahrir Square to one of the world’s most virulent Islamist ideologues, Sheikh Yusef al-Qaradawi; and threaten to dispense with the peace treaty with Israel.

If both the Egyptian military and the Brotherhood conclude – as they reasonably could be expected to do – that there will be no costs associated with going beyond the unfriendly initiatives Cairo has already adopted, it is predictable that still worse behavior with respect to our interests and allies will be forthcoming.  That conclusion will probably not be lost on one other important audience: whatever secular democrats there actually are in Egypt, who must be watching with horror the dissipation of any hope for support in keeping their country from becoming the next shariah-adherent Islamist stronghold.

It is hard to characterize all this as other than a further diminishing of America as a beacon of liberty and reliable friend to those who cherish freedom, or aspire to obtain it.  If we are unable to counter even those who are explicitly hostile to our survival as a nation, we encourage the perception that this country is reduced to appeasing its enemies and selling out our friends. We will have many more of the former and far fewer of the latter.

A further impetus to the perception of a diminished America may come this week after Atlantis performs the planned final flight of a U.S. space shuttle. President Obama declined to keep the shuttles going, canceled the planned replacement platform for manned space flight and thereby condemned this country for the foreseeable future to reliance on Russian and perhaps, in due course, Chinese rockets to deliver our astronauts to the space station.

Lest we forget, this momentous dismantling of America’s place as the world’s preeminent space power fits the Obama Doctrine in one other way:  It was just a year ago that the then-newly appointed NASA Administrator, Charles Bolden, recounted how President Obama had apprized him of his priority mission: “Perhaps foremost, he wanted me to find a way to reach out to the Muslim world and engage much more with dominantly Muslim nations to help them feel good about their historic contribution to science…and math and engineering.”

Kind of hard to miss the pattern here.