Trending Now
You are at:Home»Featured»Obedience and Ballroom Dancing
By Dorothy Pilarski on January 26, 2012 Featured, Parenting 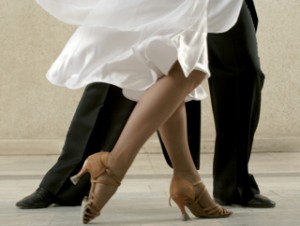 I don’t think anyone would argue with the notion that in order to learn any new skill, you need to have the ability to be obedient. For example, if you want to learn how to do the fox trot, or tango, chances are you would register for classes and obey the instructor. You would do what the instructor told you to do because of your hope for the desired end result — knowing how to do the fox trot or the tango.By repeatedly obeying a series of instructions, you will have a new skill. It becomes a matter of cause and effect. The same holds true when we are learning how to drive, play a sport, or learning to operate your new computer or big screen TV.Obedience gets a little trickier in a variety of circumstances.

As a parent, I know I have to work hard in enforcing my expectation of obedience from my children. It is my hope and prayer I instill not just the habit of obedience, but the virtue of obedience. In my own home growing up, if I wasn’t obedient, there was a serious price to be paid.

So, from a very young age, I was taught that it was important to obey not just my mom, dad, dance instructors, teachers, principals, and employers, but it was also critical to prayerfully obey the Ten Commandments and Church teachings.

Obedience, as taught to me, was both a life skill and tool for salvation.

Just like many women, I went through a stage in my life where I came face to face with my inner Eve. I dared to cross the line, challenge, question and push the envelope. Disobedience, I learned can come with some adrenalin rushes and feelings of adventure, but in the end it is a gateway for many painful, confusing moments.

I have come to equate a life of obedience with a life of reverence and regard. I have also seen the fruits of obedience over the long haul, being prayerfully obedient really does pay off in the long run. It requires self mortification, but in my experience and from what I have seen, it’s worth the spiritual work involved.

Think about the good old days, when a teacher or employer could pretty much depend on a new student or employee to come into a new situation with the instilled habit of obedience. In today’s day and age, I have heard many employers and teachers say that there are droves of defiant  youth.

In some cases it’s wreaking plenty of chaos.

So today, at an elementary school ballroom dancing recital, I became quite philosophical. While I absolutely loved watching the boys and girls dance and to relate to one and other in such a dignified way, I was puzzled by many of the parents who were being flagrantly disobedient.

It was both maddening and heartbreaking.

At the beginning of the performance, the principal, who is a hard working Catholic educator and who has committed hundreds of extra hours to our school, made a simple request,

The request was emphasized by the ballroom dance instructor several times, “Please do not take photographs of the performers, the flashes are disruptive to an already nervous dancer.”

Well, low and behold, what do you think happened once the kids started dancing?

You got it, a couple of parents completely  disregarded the repeated requests from both the principal and the dance instructors.

I was completely embarrassed watching the “if he can, I can”  mentality take over.

I am the daughter of two photographers, a scrapbooker. I absolutely love taking photographs. I have found the board policy unreasonable and trying at the best of times, but I have never had the gall to pull out my camera or video camcorder right after a formal request by a school principal, in an auditorium full to the brim.

I guess I do have remnants of my mother’s training still buried in my soul.

In fact today, I got mad at disobedience.

Dozens of thoughts floated through my mind. I beg your patience as I share them.

Don’t they have the common sense to know that obedience has to be modeled? Remember this, if your child or employee sees you disobeying rightful authority figures, they will most likely do the same.

Don’t be surprised when a cop comes knocking at your door to inform you that your son or daughter in trouble at school or work because they failed to listen to the rules. Or even worse, the habit of being disobedient was taken to the streets. They somehow ended up thinking that the rules of the road didn’t apply to them and ended up in a tragic accident caused by speeding.

Secondly, do you know how embarrassing it is for a child to have their parent blatantly disrespecting the school principal in front of hundreds of other students, the entire professional staff, dozens of parents and the instructors of an independant dance studio?

Or, even worse, maybe you have done it so often that your kids have begun to believe that being disrespectful is normal.

Shame on you for embarrassing your child. If you think your disobedience doesn’t have a reflection on your family — think again!

Thirdly, we have hardworking dedicated educators that have made countless sacrifices for the education of your child. I know the principal of the school in question goes beyond the extra mile. The school doesn’t have to have ballroom dancing, skiing, chess, drama and the countless other extra curricular activities for its students. Many professionals have dedicated hundreds of hours to give your child opportunities it would have otherwise not have had.

For goodness sake, can you obey the principal out of sheer respect? Please don’t ruin it for the rest of us. The school could conceivably cancel programs or simply not invite parents because of the belligerent lack of respect for the stresses faced by educators.

Besides, how many hundreds of photographs do you still have sitting on your hard drive? Do you really need one more? How often do you sit and watch every single video you have taken?

Surely, being a good role model for your kids, showing respect for the principal and for the rules and regulations which are trying to enforce the safety of all children is more important than a few digital images.

The school has a virtues program in place, with banners, assemblies, drama skits and lectures. It is trying to teach students some good moral habits, obedience is just one of them. The teachers need your help.